What a fitting venue for one of the most theatrical bands ever to tread the boards. When Opeth took the stage at the Forum Theatre in Melbourne, a full house was waiting in anticipation for the icons of Swedish progressive metal. Like children who have just discovered sweets for the first time, eyes lit up with excitement when Mikael Akerfeldt (vocals, guitar), Martin Axenrot (drums), Frederik Akesson (guitar), Joakim Svalberg (keyboards) and Martin Mendez (bass) appeared on the proverbial ‘dot’.

It’s impossible to predict what an Opeth show will hold, other than to say that it will satisfy; for each set is always as unpredictable as the rise and fall of the beats in their songs. After 25 years in the business, these guys know how to please their fans. Constructed to promote their 2014 album Pale Communion the set list included much of their new material, and certainly that was well received.

Pale Communion is Opeth’s eleventh studio album, and it brings together the best of all their musical styles. Neither purely melodic nor purely metal, songs meander along their own path, build to a crescendo and slowly settle into instrumental chords that would give any classical musician a rush.

With such mastery, you’d think Akerfeldt would be rightly superior and aloof, but no. If he wasn’t a musician he could well be a comedian who engages the crowd with self-depreciating humour. Recognising the punters’ loyalty and Melbourne’s ability to fill a fine venue like the Forum, Akerfeldt teased his adoring fans by asking them what was wrong because they were so quiet. It seemed as if the band’s genius had struck everyone dumb.

Working through both old and new material, Opeth did its utmost to please everyone who’d made his or her way to pay homage to a long-lived and much-loved figurehead. Even after a quarter of a century the vibrancy and passion of the band is very evident, and it seems that the music is still evolving into something even the band members don’t yet know about.

As with many of life’s experiences, we can certainly say that it’s the journey that’s important, and not reaching the often-elusive destination. 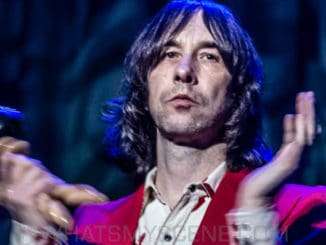 Right now it’s a room with no lights on. An unmade bed. A laptop with 9% battery and a mosquito that just refuses to die.
Dave Larkin, Dallas Crane
I like to think that I belong to the head-strong Independent Music Scene – where we – musos and audience and everyone in between – all make gigs/tours, recordings, releases happen for ourselves and work our arses off to keep it going for the rest of our lives – all for the love of Music!
Florelie Escano
We can be dirty, we can be imperfect, we can be classy, it doesn’t matter. We drift between scenes and eventually may just create our own.
The Ugly Kings

My scene is driving fast cars and shooting guns.
Ace Frehley
Melbourne. Nowhere else is as great as Melbourne.
Brat Farrar

Flanelette pyjama pants.
Timberwolf
Currently its the Yarra River Trail I’m walking along. Generally my scene would be Melbourne. Nothing feels or compares to home.
Simon McConnell, The Delta Riggs
My scene is Brunswick. I love it. It provides me with just about everything I need.
About Charlie Marshall

Well I’m still looking for my scene, and I think I might have found it. Between the pages of What’s My Scene Magazine.
Dave Faulkner, Hoodoo Gurus
All the wandering. The bastards and the angels. The sound of the rain and the pains of the heart. The silence. All the houses and all the rooms. All the keys and phones.
Raised By Eagles

I’m in with the Out-Crowd
Dave Warner
The car wash scene from Cool Hand Luke will do just fine thank you.
Old Gray Mule
Cool small bars with good food, good wine, good company
The Backsliders
Leadfinger is a very strange band, hard to define, but we are free.
Stew, Leadfinger
I will continue the continuum, singing my Songline.
Kutcha Edwards

When I’m not working in the studio or doing shows I’m at home with my partner and our baby so I guess they are my scene.
Way of the Eagle
Going to the river on sunny afternoons with the blow up dingys and resting your beers on lily pads.
The Frowning Clouds
Experimental electronica, musical metacreation, multiplicitous media, hacking.
Ollie Brown

I love being on a little boat near home in South West Victoria with a fishing line in the water, the Sun coming up or going down. I also love walking the streets of Melbourne or Manhattan or many of the beautiful towns and villages of Ireland or anywhere. My partner and my family are central to it all. I also love being in the midst of a great music session, anywhere, anytime, being transported into the soul of the Universe.
Shane Howard
Obviously to create music. My family. I love driving my Ferraris.
Yngwie Malmsteen