Hollywood rhythm & blues band Vintage Trouble performed at Melbourne’s Corner Hotel on Wednesday 30 March 2016, playing Australia behind their third studio album 1 Hopeful Rd. that was released last August, on the back of touring extensively with AC/DC.

The stylish retro rockers have also previously supported Queen’s Brian May, Bon Jovi, The Rolling Stones, and The Who, along with playing at many of the world’s biggest festivals. The self-branded “Trouble Makers” are Ty Taylor on lead vocals and dance-moves galore, Nalle Colt on guitar, Rick Barrio Dill on bass, and Richard Danielson on drums. Vintage Trouble’s new album reached No. 2 on the iTunes Rock Album Chart and the single Strike Your Light went No. 1 in Japan. The night’s support was 7” DJ Pierre Baroni from the PBS 106.7FM radio show Soulgroove’66 and Cherry bar’s Soul in the Basement.

About Paul Miles 162 Articles
Paul Miles is a rock photographer specializing in live music photography, who captures the true spirit of rock’n’roll in action by many of the world’s greatest performers. Over the years, he has shot a vast array of rock music photography: from gigs in world-famous clubs like the Apollo in Harlem and the Whisky a Go Go in Hollywood, to iconic arenas like New York City’s Madison Square Garden and Australia’s MCG, as well as in retail stores Barnes & Noble, Apple, and John Varvatos CBGBs.
Contact: Website Twitter 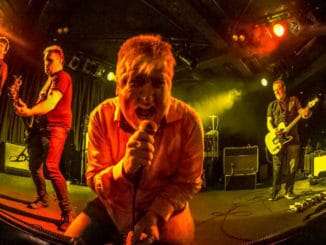 Going to the river on sunny afternoons with the blow up dingys and resting your beers on lily pads.
The Frowning Clouds
When I’m not working in the studio or doing shows I’m at home with my partner and our baby so I guess they are my scene.
Way of the Eagle
The beach. Tea with gin at your grandparents house. They have the best stories.
Betty & Oswald

Currently its the Yarra River Trail I’m walking along. Generally my scene would be Melbourne. Nothing feels or compares to home.
Simon McConnell, The Delta Riggs
My scene is finding any excuse to dance with my 2 year old daughter Ruby.
Matthew Hardy, Comedian

Tunes, mates, and honesty. No dickhead policy!
Buddha In A Chocolate Box
Flanelette pyjama pants.
Timberwolf
The dog park’s pretty good. I have a couple of miniature pinchers. And they’re the loves of my life. I take them for walks to the dog park; I’ve got a Harley Davidson I ride around. It’s not too exciting. It used to be sex, drugs and rock n roll; now I walk my dogs.
Stan Lee, The Dickies

Right now it’s a room with no lights on. An unmade bed. A laptop with 9% battery and a mosquito that just refuses to die.
Dave Larkin, Dallas Crane
Well I’m still looking for my scene, and I think I might have found it. Between the pages of What’s My Scene Magazine.
Dave Faulkner, Hoodoo Gurus
I am a simple man. My scene is simple. I like playing metal and spending time with my family.
Waclaw ”Vogg” Kieltyka, Decapitated

Act III, Scene VI of King Lear. A tense and gripping scene wherein the ageing king informs his three daughters that they have all been accepted as contestants on Family Feud.
Ben Pobjie, comedian
I love being on a little boat near home in South West Victoria with a fishing line in the water, the Sun coming up or going down. I also love walking the streets of Melbourne or Manhattan or many of the beautiful towns and villages of Ireland or anywhere. My partner and my family are central to it all. I also love being in the midst of a great music session, anywhere, anytime, being transported into the soul of the Universe.
Shane Howard
I like to think that I belong to the head-strong Independent Music Scene – where we – musos and audience and everyone in between – all make gigs/tours, recordings, releases happen for ourselves and work our arses off to keep it going for the rest of our lives – all for the love of Music!
Florelie Escano