This double cutaway thinline guitar was built in the old Maton factory in Canterbury (Vic) in February 1965, the last year of this particular model. The Supreme Electric 777 has been described as Maton’s answer to the Gibson 335, except that it has a hollow body rather than a central block. The model was described by Maton as “A top line Guitar with perfect styling, handling and real power performance”, a phrase that would not have been out of place in automotive advertising of the day.

I bought this guitar in Mildura (Vic) during the 1990s, and I believe that at some time it had belonged to Aboriginal performer Ian (Moonie) Atkinson (now deceased). The guitar came to me without a case, and with no other background information.

The fingerboard is unusually narrow, and although this feature is desired by some players, others (including myself) find it somewhat restrictive. The tuning pegs have been updated, but otherwise the guitar is in original condition. The rotary pickup selector switch has that odd-looking chrome knob lever which was unique to Maton from the fifties through to some of their recent models.

The finish on this guitar displays the ravages of time, particularly on the headstock where most of the paint has flaked off. However, the guitar is in good shape structurally, and the original pickups sound great.

About Ben Rogers 17 Articles
Ben Rogers has played guitar for a long time, and has accumulated an odd assortment of guitars over the years. He plays around Melbourne with Instrumental Asylum – a surf/spy/guitar-noir group, and also with his gypsy-jazz combo The Ben Rogers Trio.
Contact: Website Facebook YouTube 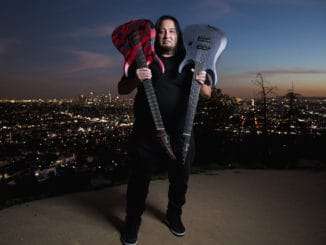