The Animals are back in Australia, touring their much loved hits. Founding member and drummer John Steel will be joined by Mick Gallagher, the bands original keyboardist, Danny Handley on guitar and vocals and Roberto Ruiz on bass and vocals, as they perform all the classic hits – ‘We Gotta Get Out Of This Place’, Don’t Let Me Be Misunderstood’, ‘Boom Boom’, ‘It’s My Life’, ‘The House Of The Rising Sun’, ‘I Put A Spell On You’, ‘Bring It On Home To Me’ + more.

Here’s a throwback to an interview with founding member and original drummer, John Steel. Don’t miss out on this tour! For more information, visit Metropolis Touring.

John Steel’s scene is “just doing what I do”. The drummer of one of UK’s most influential bands, The Animals, continues: “When I’m on the road with the band, it’s just great fun. This band we have now is probably the best line up since the original band. And the good thing about it: we all get on well together. We really have a lot of fun on the road travelling and on stage as well. So we get a lot of absolute enjoyment out of doing what we do. That’s my scene.”

Growing up in the mid-late ‘50s, Steel always knew music would be his scene. He explains: “I think we were really lucky because, in 1956, when I first met Eric Burdon, we were both 15, and rock n roll was just really taking a hold a hold on teenage culture. So, it was it was a fantastic time for us to suddenly be exposed to Chuck Berry, Little Richard and Fats Domino. Elvis suddenly exploded on the scene and it was just fabulous stuff. We were there and we didn’t just want to be fans, we wanted to get much more involved in it, to actually be players. It wasn’t enough just to listen to the records, we wanted to play the songs.”

“Like most parents”, Steel’s dad told him to “get yourself a proper job” however, Steel continues, “from the very start, Eric and me, we were high school dropouts, we were only 15 years old in 1956, we would have had to become factory fodder or something really depressing like that. So we enrolled in art school. That’s where we met, first day of art school. We had limited amount of artistic talent, just enough to get us into art school. We just found that we both had similar taste in music. We both loved blues and jazz and rock n roll, and American movies. We hit it off right away and within a few months we formed a band. Neither of us had any intention of becoming an artist; it was always Eric’s ambition to become a singer. So we managed for three years to have a smashing time at school, as well as spending a lot of time skiving and dodging off and playing in the band.”

Steel did attempt the working art world, only lasting “about three months in a drawing office”. He explains: “I wasn’t good enough to be in fine art but I managed to get by in technical illustration which meant illustrating maintenance manuals for jet aeroplanes which was really boring. After three months, I said ‘to hell with this, I’m going back to Newcastle’ because we were having a lot of fun up there. As soon as I got back, Eric and me started a new band – we’d already had a few by then. We just kept on having different line-ups and then by late 1963 it suddenly gelled into the line-up that became The Animals. On the way there we picked up a guy called Alan Price who joined us in 1959. We were playing at a little church hop social club thing and he was in another band on the same night. He was playing guitar actually in this other band.  And he came up after a few numbers and said, ‘Can I sit in with you?’ because there was a big old upright piano in a corner where we’re playing. And he sat down and he knocked the hell out of it. And that was it, we said, ‘You’ve got to come with us’ and just like that, Eric, Alan and me became the nucleus of The Animals from then on.”

As for their own songs being covered, Steel states: “I haven’t heard it but I’ve been told that there’s a hugely successful cover of ‘We’ve Got To Get Out Of This Place’ by an Australian band called The Angels but I haven’t heard it. I don’t know what it was like. But they’ve done very well with it anyway.”

Many artists, including Bruce Springsteen site The Animals as one of their main influences. Yet, unassuming as always, Steel feels it “peculiar” being called a legend. He states, “I don’t know. I mean I’m still in awe of the people who inspired us in the first place, Chuck Berry, Little Richard, and then of course the great bluesmen Muddy Waters and John Lee Hooker. and Lightnin’ Hopkins and all these people for me are still giants. I never felt like a legend myself.” Still, Steel, as well as Eric Burdon, have influenced many. Though no longer touring together, Steel did occasionally see Eric Burdon after the two went their separate musical ways, stating: “Not (so much) nowadays, not now that he’s living in California. The last time I saw him was about 15 years ago, some people organised for me and my wife to go there to celebrate his 60th birthday in Los Angeles. And then a year after that he happened to be playing a gig in Newcastle and we met again then.”

Steel, himself, has always enjoyed touring. “Touring is great,” he states. “I’ve only just come off the road two days ago, we’ve done 41 gigs this year already. We started off with four-five weeks in Germany, then we came home for a couple of days and then two weeks in Sweden that we’ve just finished. That was lot of fun and I got home two days ago and then this weekend and fly to Helsinki where we’re just doing a one off gig with a couple of bands and then we do a few more gigs before we get to set off to Australia in the beginning of May. It’s real busy.”

Busy means it is difficult to write new material, though Steel states: “Our singer, Danny Handley, has been writing original material and he’s been trying to get us to go in to record some of it but we haven’t had time to even breathe nevermind record. Hopefully this year, in between stuff, we’ll get down into the studio and get some new stuff down.”

“In the meantime,” Steel continues, “we’ve been having a good time – not only do we play the hit singles from the original Animals but we play a lot of the catalogue that we recorded back with album tracks and B-side.  Danny is a huge fan, he’s a lot younger than me and Mick. Mick joined the band in 1965. But Danny and our new bass player they’re kind of fortyish. But Danny is actually steeped in rock n roll; he loves it, and he keeps digging in to the old Animals catalogue and saying ’why don’t we play this, why don’t we play that?’ and I’m saying, ‘Oh man, we haven’t done that for 50 years’. Just been in Sweden for a couple of weeks and we restored three numbers that we hadn’t played in donkey’s years and we tried them out on the audience to see how it went down, and it kind of refreshes the set. I mean we play obviously ‘House of the Rising Sun’ and ‘We’ve Gotta Get Out Of This Place’, and ‘Don’t Let Me Be Misunderstood’ and ‘It’s My Life’ as well as some of the others, but the rest of the setlist is mixed from the catalogue, album tracks and stuff.”

As for Australia, Steel has “been three times before.” However, this time will be different. He states: “We’ve done a few short tours but this is a real proper one, of about a total of 14. Really looking forward to getting round the whole coast and having a good time.”

Get your tickets to The Animals Australian Tour from Metropolis Touring http://www.metropolistouring.com/theanimals

With their legacy undeniable, Australia is in for a treat when original members John Steel and Mick Gallagher along with Danny Handley and Scott Whitely bring The Animals live experience performing all their greatest hits Live in concert this coming May 2017 Presented by Metropolis Touring. www.metropolistouring.com

The Animals boasts some of the greatest songs in popular music history – ‘The House of The Rising Sun’, ‘We’ve Gotta Get Out Of This Place’, ‘Don’t Let Me Be Misunderstood’, ‘It’s My Life’, ‘Don’t Bring Me Down’ and ‘Boom Boom’ (as featured in the James Bond movie, ‘Skyfall’) to name a few. “The Animals earned their name thanks to their wild stage act. That was 50 years ago and they have calmed down since, but their music has lost none of its vigour” – Wales Online

The Animals had a staggering 9 top 50 hits in Australia –

The House Of The Rising Sun #2

Don’t Let Me Be Misunderstood #29

We’ve Gotta Get Out Of This Place #49

Wednesday 10th May – SYDNEY The Basement

Friday 12th May – MELBOURNE The Palms at Crown

Saturday 13th May – ADELAIDE The Gov 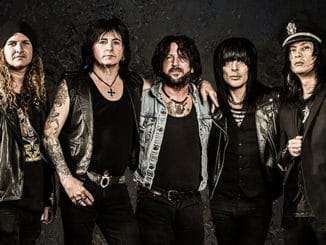 Scene News: Thunder Down Under roars into Kiss Konvention this weekend