Williamson and Tek met at a memorial show for founding Stooges guitarist Ron Asheton in 2011 and reconnected when Williamson finally made it to Sydney with Iggy & The Stooges in 2013. They’ve since become neighbours in Hawaii. Although generationally separated, they share roots in the fertile Ann Arbor/Detroit high energy rock scene of the late 60s and early ‘70s.

Williamson first took up with the Stooges in 1971 after the release of their second album, and was Iggy’s partner in crime when David Bowie brought the band back to make one of the most iconic and influential albums of all-time, Raw Power. Ann Arbor native Tek, thanks to a lengthy family stay in Sydney in 1967 which precipitated his move to study medicine at the University of NSW at the age of 19 in 1972, was starting to introduce the Ann Arbor/Detroit high energy sound to Australia with a nascent Birdman around the same time as the Stooges were falling apart in 1974.

The pairing of these two greats has a special emblematic significance that reflects the Stooges’ influence on Radio Birdman, and in turn both bands’ shared influence on a notable thread of Australian rock that has continued since the mid-‘70s.

Radio Birdman’s very name came from a (misheard) Stooges lyric, their first album was dedicated to the Stooges and it opened with a cover of the Stooges’ “TV Eye”. “Search & Destroy”, the iconic anthem from the seminal Williamson-era Stooges album Raw Power, was a live Birdman fave. Countless bands that followed in Birdman’s wake in Australia – from the Lipstick Killers to the Birthday Party to the Hoodoo Gurus to the Celibate Rifles to Bored – have cut their teeth on Stooges material.

The fact that the Stooges maintained a strong presence in the Australian musical psyche for decades, even before their early ’00s resurgence and despite never having toured or been played here originally, is very much down to Birdman’s efforts on their behalf. The new album thus reflects part of a great musical continuum. An Ann Arbor/Detroit and Australian rock’n’roll continuum. And it finds master and apprentice working as equals.

It’s not the first time that Deniz Tek has worked with a Stooges member. Having met Ron Asheton on a trip home during Birdman days (resulting in the Tek-Asheton Birdman co-write “Hit Them Again”), Tek enlisted Ron to play in the short-lived supergroup New Race in 1981, and he subsequently employed Ron’s brother Scott Asheton to play on and tour his first solo album in the early ‘90s. Tek even stood in for Ron for a short set of Ron-era material when the Stooges played that memorial show after Ron’s death.

It’s not even Tek’s first project with Williamson: the pair released an EP of acoustic Stooges covers a couple of years back. But it is the first time that Williamson and Tek – a Stooge and a Birdman – have collaborated as partners on a full album of new original material.

Williamson had this to say about the project; “It was really a lot of fun working with Deniz to make a no-frills, good old-fashioned guitar album. Took me back to Raw Power and Kill City days. Deniz comes from a very similar approach to music that I do, both of us have had many years of experience in Detroit and Ann Arbor, Michigan.”

Tek adds: “Raw Power shaped my path as a young guitar player. It was great to partner up with James to make this album. Everything fell into place beyond expectations – the songs, the band, the production, and even the timing. I am very happy with it.” 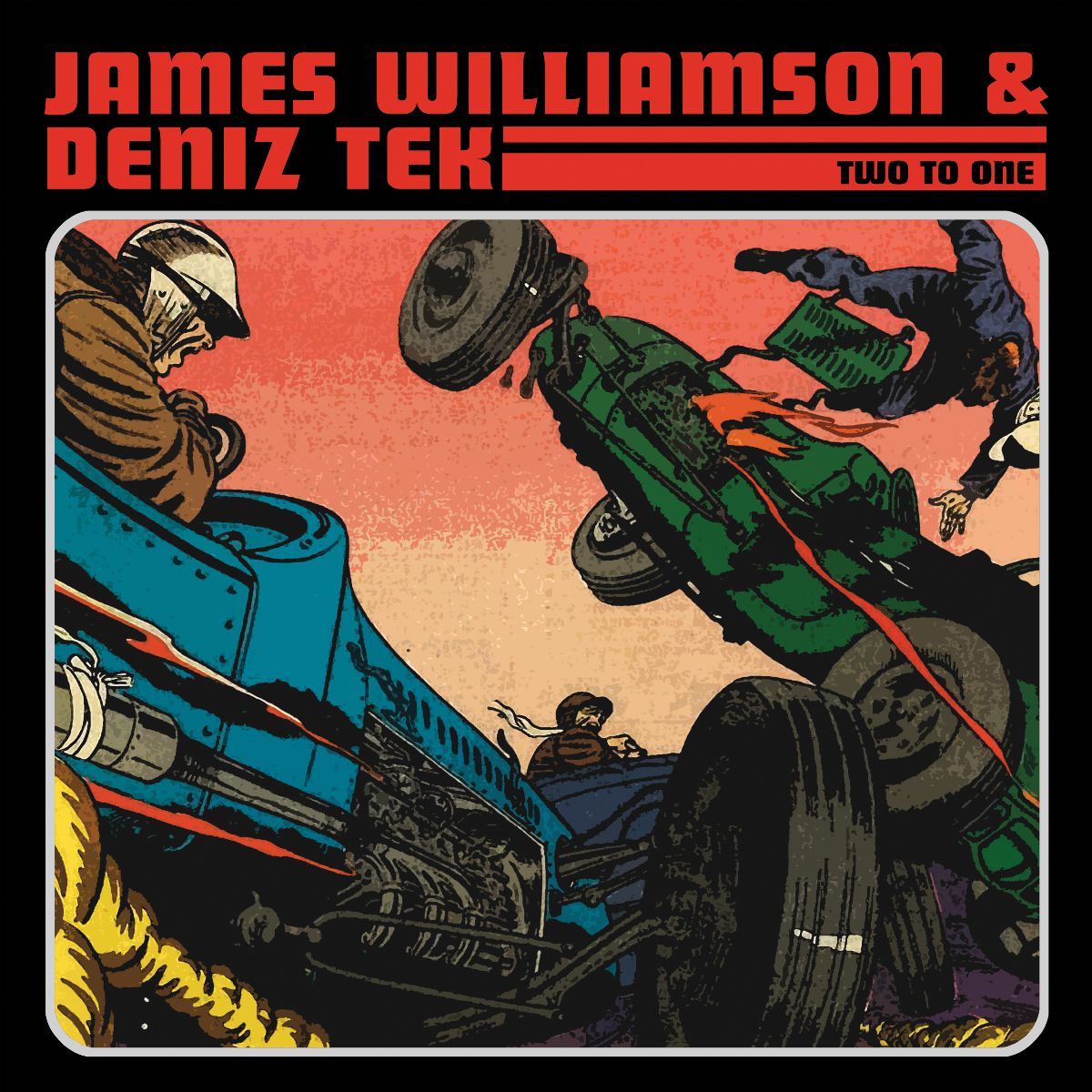 Two To One will be available on CD, digital and in your choice of red, blue, yellow or classic black vinyl!

Formed in 1974, Radio Birdman burst onto the Sydney scene with an energy and attitude previously unseen in that city. Clashing with the powers that be of the time, the band chartered a steadfastly DIY course kicking […]

Tegan Voltaire, The Voltaire Twins
Local bands at sticky carpet venues. Vinyl. Social networking. Keeping healthy in order to play full throttle live sets. Loud rehearsals. Good people with creative ideas. PRIMITIVE ROCK.
Jon S Williams of City of Cool
Sitting in the sun, in a nice chair, with a good book.
James Reyne
Bed. Pringles. Whisky. Attenborough doco. Wham.
Marlon Williams
Ep. 1 Series 3 of BBC’s ’Sherlock’ where Sherlock bungee jumps through a window and kisses Molly Hooper.
Miss Adelaide Everheart from Early Burley Burlesque
Experimental electronica, musical metacreation, multiplicitous media, hacking.
Ollie Brown
Any scene with Al Swearangen & Mr. Wu from the show Deadwood ;)
Mathas
Our scene is in the city of Bath, a small city with a very big musical identity, we play the British festivals and I am also in the ’choirs scene’. We are also in other bands for fun, music all the way, roll on summer!
Su Hart, Baka Beyond
Our scene is this big gorgeous wide world we live in all its majestic splendour!
Kim Salmon, The Darling Downs
Beer, riffs, good people, good food and new adventures, anywhere those things exist, that’s my scene!
Andy, Don Fernando
Fuck the Fucking Scene question! xo
Fuck The Fitzroy Doom Scene
My bedroom
Nantes
Staying home out of harms way.
Peter Milley, Cairo Club Orchestra
All the wandering. The bastards and the angels. The sound of the rain and the pains of the heart. The silence. All the houses and all the rooms. All the keys and phones.
Raised By Eagles
Tunes, mates, and honesty. No dickhead policy!
Buddha In A Chocolate Box
Currently, I’m completely enveloped by writing my book; trying to complete the manuscript for my tome.
Jeff Duff
Hot, hot lovers
Luke Monks, Gay Paris
It’s Thonbury. It’s my dreaming. I’ve lived here 30 years and it’s evolved with me. The more I drink wine, the more wine bars appear in the neighbourhood. The more I eat, the more cafes appear in the neighbourhood. Fantastic.
Denise Scott, Comedian
That’s a hard one, although I do love anything electronic with an indie-pop feel!
Franki
My scene is Brunswick. I love it. It provides me with just about everything I need.
About Charlie Marshall
Country roots, old time, bluegrass, folk, Americana scene Traditional plus :)
Whitetop Mountaineers
Cool small bars with good food, good wine, good company
The Backsliders
Comedy, surreal show girls, burlesque and theatre
MC KREWD
World/folk. Acoustic and proud of it!
Ilana Cravitz, The London Klezmer Quartet
Going to the river on sunny afternoons with the blow up dingys and resting your beers on lily pads.
The Frowning Clouds
I have no idea what my scene is; I have been listening to Dubstep and a bit of Drum N Bass. I found a lot of Hip Hop and RnB stuff is getting very interesting again it is pushing different sounds out. I’ve been really into cycling since the early ‘90s; racing mountain bikes and racing road bikes. So between cycling and music there is not much time left, a bit of sleep now and again.
Mike Edwards, Jesus Jones
It’s a delirium, really, but I like to live like this.
Hugo Race