According to much loved comedian Denise Scott, seeing her back stage is not pretty. She spends most of her time “vomiting in the toilet with nerves and in the foetal position weeping.” Hard to believe our comedy national treasure gets nervous before performing, but once she’s on stage the anxiety disappears and she’s in her element regaling us with her hilarious stories.

To hear her latest amusing tales, this Friday the 29th May, Denise Scott is appearing in the SOLD OUT LearnToLive Comedy Gala alongside the stellar line up of Adam Hills, Dave Thornton, Ronny Chieng, newcomers Aunty Donna and many more at The Thornbury Theatre. She will also be volunteering for the Learn To Live charity as its ambassador in Indonesia. Her involvement with the LearnToLive global organisation came about three years ago upon meeting Yanti Turang. “Yanti Turang is a friend of my son’s. Yanti apart from being a humanitarian worker and a nurse is also a rock musician, and my son’s a musician, Jordie Lane. We met and she just used her charm…well a lot more than her charm actually. She is a really extraordinary person. I rarely say that about anyone. I was so struck by the fact that she is young and fired up to help people. She really gets out there and helps people. I was rapt to help, actually. It’s a very hands on thing to do. It’s an easy way to help, from a comedian’s point of view.” 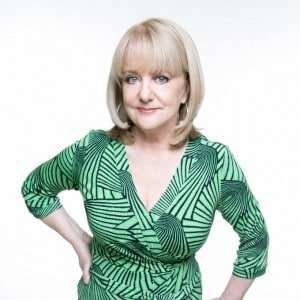 Scott’s involvement in the charity doesn’t stop there. She is also accompanying Yanti Turang overseas to do some hands on work and raise awareness in the name of health.“I’m an ambassador for LearnToLive now, although I say that, but I haven’t done much yet. I’m going to go with Learn to Live with Yanti to Indonesia in a month and get this, work in the health clinics with her. (laughs heartily) I keep screaming Yanti I will be hopeless. I’ll be a liability. She seems to think there’ll be amusing film footage come out of it or something, that she’ll be able to use to raise funds.”

LearnToLive is a humanitarian organisation that provides health care, health education, and clean water solutions to communities worldwide through the promotion of self-sustaining practices. LearnToLive was started in 2011 by Yanti Turang who observed first hand, the gaps in the health care system, lack of health education, and lack of access to clean water in rural Indonesia. Scott elaborates further on the organisation’s aims:

Whilst winning the Barry for Mother Bare in 2014 was a culmination of hard work, talent and Scott’s “dogged persistence and never giving up” other poignant moments in Scott’s career prove to be just as memorable: “Performing a show called Comedy is not Pretty and Comedy is still not pretty. (Two shows) with Judith Lucy and Lynda Gibson. The second time we performed together, Lynda was really ill with ovarian cancer. It was an amazing thing to do this show with her. To do that show was really significant and quite powerful. And doing a comedy festival show with my son Jordie Lane. He was hanging about the house, and Lynda had just died. I thought it was a great idea, us doing a show together. It was really confronting to write a comedy show and perform it with your son. He did music in it. It was fantastic and we were nominated for the Barry that year. It was really an amazing thing to share. It was hard, but really rewarding.”

Kudos to those brave individuals who make a career out of being artists, and like Scott quit their day jobs and follow their dream. Scott shares advice she heard from another well known comedian.“I heard Sandra Bernhard talking recently, and it’s a pretty obvious observation in a way. She was saying if you’re an artist you cannot have a plan B, otherwise you will do the plan B. You have to absolutely not have a plan B, you have to leave your job. In Australia, I think my god, what a small country to be an artist in. Comedy, you seem to have a lot more hope than almost any other art form and music you’ve got some hope in as well. Anything that just relies on you writing it, doing it, getting there and hopefully there’s a microphone. but even if there isn’t you can play your guitar and sing or make jokes.”

When it comes to who inspires Denise Scott, it’s no surprise that it’s a fellow Australian comedianwho is successful in her own right. “Judith Lucy, who’s a good friend. She definitely inspires me. She hates me saying this stuff, she reckons it’s bullshit. She’s twelve years younger than me, but started around the same time. From the get go she would spend so much time crafting her jokes and her stories. I really learnt a lot working with her, how much time it took to do it well.”

Scott describes her comedy style as “Autobiographical Storytelling with a rude twist.”“I cannot make a thing up. I find as I’m getting older I like being more rude.” When asked how she describes her comedy in food form she answers “Maybe a tasty sago pudding, it’s sort of daggy but it’s got potential.”

With live music by The Tusken Raiders

Tickets are SOLD OUT !

If you can’t make it along to the show, donate to the LearnToLive organisation here: learntoliveglobal.org

About Anna-Maria Megalogenis 168 Articles
Anna-Maria has been writing for Street Press in Melbourne and Sydney for over 20 years. She is passionate about food, music and the arts, is an avid reader and used to hand write reviews for Beat Magazine at the Great Britain Hotel, where a patron once suggested she was ripping off articles in Rolling Stone magazine.
Twitter

Q&A Tell us about your new stand up show? The show is basically an hour of my best material, themed around the fact that I have been in the UK for 14 years and I […]

Marc Maron, who for 20 years has produced honest and thought-provoking comedy across all mediums, is one of the great comedic iconoclasts. A legend in the stand-up community and of the podcast medium, Maron has […]

My family, my friends, my home.
Cory Putman, Norma Jean
Cool venues with good beer on tap that don’t mind us getting loud and getting room grooving so hard you feel the floor shaking.
Papa G and The Starcats
The Astor Theatre on chapel st. Old cinema with copious amounts of atmosphere playing classic films (Chaplin, Gene Kelly, Kubrick, etc) and me with a honeycomb choc top spilt on my Tshirt because that’s just how I roll.
Jude Perl, Comedian
Currently, I’m completely enveloped by writing my book; trying to complete the manuscript for my tome.
Jeff Duff
My scene is a Punk-hardcore scene or an underground, minimal electronic scene, something grungy – where everyone is wearing black. That’s my vibe; don’t go out until 11 when all the other vampires come out and go home when the sun comes up at 7. Oh shit. Creatures of the night.
Greg Puciato, Killer Be Killed & Dillinger Escape Plan
Hot, hot lovers
Luke Monks, Gay Paris
“Malcolm Hill is a lifetime member of the Melbourne Music Mafia and part of the ratpack of post punk Melbourne artists who have been keepin’ it real across diverse art forms for thirty years.”
Malcolm Hill
All the kids who weren’t cool at school and still aren’t. Those people who didn’t manage to become awesome artists and uber hip performers. The raggy dolls who never found a way to make their raggy doll-ness work for them.
Jonathon Duffy
Experimental electronica, musical metacreation, multiplicitous media, hacking.
Ollie Brown
All of the above and more in my shed every Friday night
Hound
I like the beach more than anything. The beach feels like home all year round. In terms of a scene…I actually prefer to hermit most of the time.
Abbe May
All the wandering. The bastards and the angels. The sound of the rain and the pains of the heart. The silence. All the houses and all the rooms. All the keys and phones.
Raised By Eagles
My scene is at the moment Big Wongs General Tsos Chicken as I get sauce on the keys typing to you :-)
Brian Mackey
What’s my scene? well…
And another thing I’ve been wondering lately
Oh, baby,
Tell me where have you been?
Now the stage is set
Where’s my Juliet, baby?
Is it maybe
My Midsummer Night’s Dream?
What’s my scene?
Clowns
Wherever there is music is where I feel most at home
Toby Robinson
Our gigs have an air of danger and sex. Beautiful women are free to express themselves and are as dangerous as hell. Everybody can have a good time ’cos there’s a lot of love in the room and we just can’t help but stomp out that primeval swamp boogie ooze.
Chris Russell’s Chicken Walk
Bed. Pringles. Whisky. Attenborough doco. Wham.
Marlon Williams
The dog park’s pretty good. I have a couple of miniature pinchers. And they’re the loves of my life. I take them for walks to the dog park; I’ve got a Harley Davidson I ride around. It’s not too exciting. It used to be sex, drugs and rock n roll; now I walk my dogs.
Stan Lee, The Dickies
Scones, savory, sweet I don’t mind
The Wooden Sky
It’s Thonbury. It’s my dreaming. I’ve lived here 30 years and it’s evolved with me. The more I drink wine, the more wine bars appear in the neighbourhood. The more I eat, the more cafes appear in the neighbourhood. Fantastic.
Denise Scott, Comedian
No set scene. We have played with a variety of bands from King Parrot to The Datsuns. Offer us a show and give us a try!
Los Hombres Del Diablo
Staying home out of harms way.
Peter Milley, Cairo Club Orchestra
Ep. 1 Series 3 of BBC’s ’Sherlock’ where Sherlock bungee jumps through a window and kisses Molly Hooper.
Miss Adelaide Everheart from Early Burley Burlesque
Tunes, mates, and honesty. No dickhead policy!
Buddha In A Chocolate Box
Hiking a 14K foot mountain in Colorado
Cole Washburn
Beer, riffs, good people, good food and new adventures, anywhere those things exist, that’s my scene!
Andy, Don Fernando
Quirky cabaret bars that serve a mean G&T and boast a stellar cocktail list..which is why you’ll always find me returning to The Butterfly Club! I also love the buzz of a Fringe or Cabaret Festival, or a smart Opening Night. Any excuse for a dress up, really!
Amelia Ryan, Lady Liberty
Fuck the Fucking Scene question! xo
Fuck The Fitzroy Doom Scene
Anyone who welcomes a hairy, gold wearing, hot air blowing idiot to a dinner table is my scene.
Henry Wagons
I like to be out in the nature, to get away. Go to the woods. My dad lives in the woods. Maybe once or twice a year I don’t have phone reception there is no Wi-Fi
Fredrik Åkesson, Opeth
I will continue the continuum, singing my Songline.
Kutcha Edwards
Currently its the Yarra River Trail I’m walking along. Generally my scene would be Melbourne. Nothing feels or compares to home.
Simon McConnell, The Delta Riggs
Deep 70s disco, wonky synths, shady lyrics, fairy lights and cheap wine.