I chatted to Brian on a warm summer morning while he was standing in the Botanical Gardens in Melbourne, enjoying the view. I asked him how it all came about. He explains “the chap who runs the Ding Dong Lounge, Bill Walsh (former drummer with Cosmic Psychos) – Bill’s an interesting guy and the Ding Dong is a fantastic venue – decided that he wanted the kitchen to have a New Orleans flavour. He did a bit of makeover on the venue, went to New Orleans and sourced a chef – Chris Weysham who’s a wonderful chef, and started the New Orleans kitchen as part of the venue.

Brian continues “He approached the RocKwiz office around the middle of last year saying “I want to do a run of shows with a New Orleans theme. I know your band are all fans of that sort of music, would you like to do something?” We said do you mean a quiz and he said no, just the band and Brian – so we said Let’s do it. Our guitar player James Black wasn’t available, so we got Ross Hannaford, who we all love, from Daddy Cool. Peter Luscome, the RocKwiz drummer put together this band and the idea was that we would play the Dr John album, Gris Gris, in its entirety.

The kitchen is called the Girl with Gris Gris Kitchen. Peter knew that there was a very famous album by very famous New Orleans musician  Dr John called Gris Gris. He put together the band, featuring Ross Hannaford, also Bruce Haims, Ray Pereira, Vicka & Linda Bull doing the female vocals. They we got Garry Grey who used to be in the sacred Cowboys to do all the vocals. We do that in the first half, then the second half is just a whole lot of New Orleans classics. 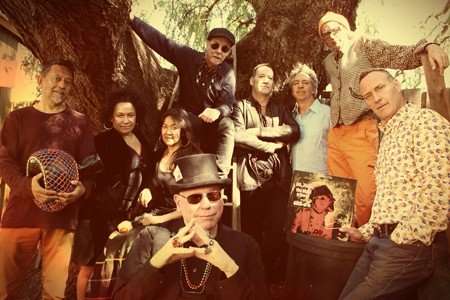 I’m the host. I’m the Maitre’D, I’m the MC, I look after people when they arrive. make sure everyone’s got a drink, make sure everyone’s comfortable. The New Orleans is a really strong theme, so I talk about a trip that I did to New Orleans a couple of years ago. I even do a little slide show, Mandy. Which is fun. We talk to people. I read a few excerpts from books about New Orleans, I give some background to the Dr John album. It absolutely went off. We had to add another night. We could’ve added 2 more nights, but we had trouble with everyone’s availability. The first is very much a presentation of this album and in the second half we sort of push the tables to the side and we have dancing. It’s just an incredible night. It was this sort of magical little idea that took off and it’s been wonderful.

Everyone knows that Melbourne’s an incredible music town, but I also think it’s growing as a food town. our restaurants are incredible, seemingly full of celebrity chefs. It’s a great food town. Put the two together and it’s a wonderful, wonderful night. ”

I ask Brian if they are planning to continue the shows. He says “I’d love to keep working, to me as a performer and a music fan, and a food fan, it’s just a joy. And to work with musicians like Vicka and Linda and Ross Hannaford, you know. I’ve been a huge fan of RH. I actually produced a dance at our local church hall in about 1974 with Daddy Cool and I was a wide eyed teenagers, I think I was 19 and to think that 40 years later I’d be sharing a stage with him and waiting backstage to go on is unthinkable, but a great thrill. ”

So what is Brian’s scene? “At the moment is looking across the lake at the Botanical Gardens. I’m looking at graceful palm trees. I’m looking towards Government House. It’s a blue sky day. We’re about to do a live cross for CHannel 10 where we are farewell a 400 year old tree that has tragically been ring barked by vandals. It’s dreadful. The tree is dying. It’s a really significant tree. It’s called the separation tree. If I look back it’s that view. Across this incredible vista of the botanic gardens, so that’s my scene.”

Gris-gris is one of those flirty, phonetic words that sounds like a food group or getting it on, but actually means a voodoo amulet which is believed to protect the wearer from evil. So it’s […]

Leadfinger is a very strange band, hard to define, but we are free.
Stew, Leadfinger
Going to the river on sunny afternoons with the blow up dingys and resting your beers on lily pads.
The Frowning Clouds
My scene is finding any excuse to dance with my 2 year old daughter Ruby.
Matthew Hardy, Comedian
Staying home out of harms way.
Peter Milley, Cairo Club Orchestra
It’s beards.
Nathaniel Beard, The Beards
My scene is Brunswick. I love it. It provides me with just about everything I need.
About Charlie Marshall
Alice likes the Google. Sime likes taxidermy. It’s a pretty happening scene.
Sweet Jean
Country roots, old time, bluegrass, folk, Americana scene Traditional plus :)
Whitetop Mountaineers
That’s a hard one, although I do love anything electronic with an indie-pop feel!
Franki
I like to be out in the nature, to get away. Go to the woods. My dad lives in the woods. Maybe once or twice a year I don’t have phone reception there is no Wi-Fi
Fredrik Åkesson, Opeth
Our scene is in the city of Bath, a small city with a very big musical identity, we play the British festivals and I am also in the ’choirs scene’. We are also in other bands for fun, music all the way, roll on summer!
Su Hart, Baka Beyond
Wherever there is music is where I feel most at home
Toby Robinson
Cool venues with good beer on tap that don’t mind us getting loud and getting room grooving so hard you feel the floor shaking.
Papa G and The Starcats
Act III, Scene VI of King Lear. A tense and gripping scene wherein the ageing king informs his three daughters that they have all been accepted as contestants on Family Feud.
Ben Pobjie, comedian
Our gigs have an air of danger and sex. Beautiful women are free to express themselves and are as dangerous as hell. Everybody can have a good time ’cos there’s a lot of love in the room and we just can’t help but stomp out that primeval swamp boogie ooze.
Chris Russell’s Chicken Walk
What’s my scene? well…
And another thing I’ve been wondering lately
Oh, baby,
Tell me where have you been?
Now the stage is set
Where’s my Juliet, baby?
Is it maybe
My Midsummer Night’s Dream?
What’s my scene?
Clowns
Currently its the Yarra River Trail I’m walking along. Generally my scene would be Melbourne. Nothing feels or compares to home.
Simon McConnell, The Delta Riggs
Book clubs, philosophy and extreme black metal
Elsen Price
“Malcolm Hill is a lifetime member of the Melbourne Music Mafia and part of the ratpack of post punk Melbourne artists who have been keepin’ it real across diverse art forms for thirty years.”
Malcolm Hill
The dog park’s pretty good. I have a couple of miniature pinchers. And they’re the loves of my life. I take them for walks to the dog park; I’ve got a Harley Davidson I ride around. It’s not too exciting. It used to be sex, drugs and rock n roll; now I walk my dogs.
Stan Lee, The Dickies
Flanelette pyjama pants.
Timberwolf
My bedroom
Nantes
The TV show “Full House
World Wild
Hiking a 14K foot mountain in Colorado
Cole Washburn
Local bands at sticky carpet venues. Vinyl. Social networking. Keeping healthy in order to play full throttle live sets. Loud rehearsals. Good people with creative ideas. PRIMITIVE ROCK.
Jon S Williams of City of Cool
The car wash scene from Cool Hand Luke will do just fine thank you.
Old Gray Mule
Obviously to create music. My family. I love driving my Ferraris.
Yngwie Malmsteen
The Astor Theatre on chapel st. Old cinema with copious amounts of atmosphere playing classic films (Chaplin, Gene Kelly, Kubrick, etc) and me with a honeycomb choc top spilt on my Tshirt because that’s just how I roll.
Jude Perl, Comedian
My scene is at the moment Big Wongs General Tsos Chicken as I get sauce on the keys typing to you :-)
Brian Mackey
I just do my best to live a life full of the things I love. Rock’n’roll, photography, New York City – they are three things right there that I love a lot!
Paul Miles
Yass KFC
Simon, Loon Lake
Scones, savory, sweet I don’t mind
The Wooden Sky
We can be dirty, we can be imperfect, we can be classy, it doesn’t matter. We drift between scenes and eventually may just create our own.
The Ugly Kings
Currently, I’m completely enveloped by writing my book; trying to complete the manuscript for my tome.
Jeff Duff
Anywhere there is good company, great conversation, and a glass of red.
Helen Perris
The beach. Tea with gin at your grandparents house. They have the best stories.
Betty & Oswald
Cool small bars with good food, good wine, good company
The Backsliders
Hot, hot lovers
Luke Monks, Gay Paris
Sitting in the sun, in a nice chair, with a good book.
James Reyne
I am a simple man. My scene is simple. I like playing metal and spending time with my family.
Waclaw ”Vogg” Kieltyka, Decapitated
I will continue the continuum, singing my Songline.
Kutcha Edwards
Deep 70s disco, wonky synths, shady lyrics, fairy lights and cheap wine.