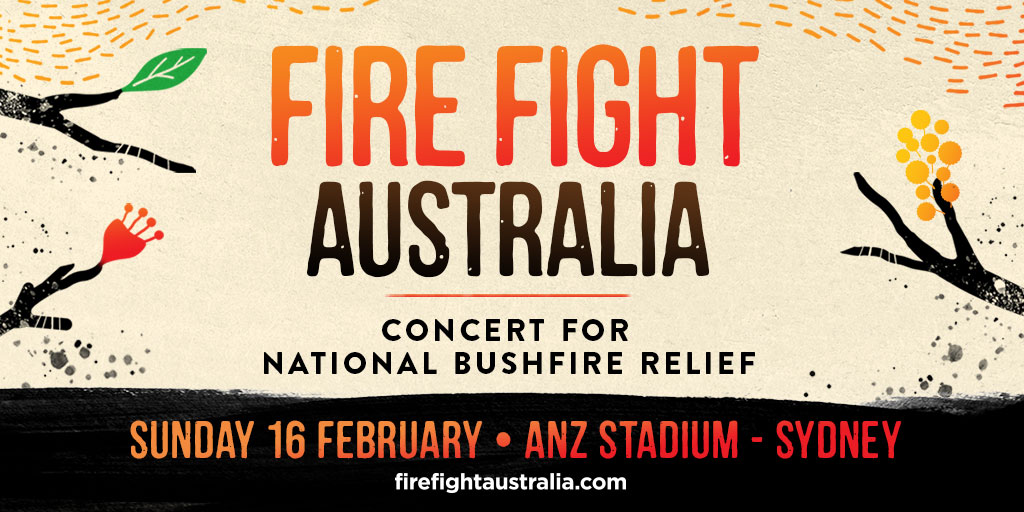 THE FIRST LINE-UP OF ARTISTS ANNOUNCED
FOR FIRE FIGHT AUSTRALIA

With so many lives lost, countless homes destroyed, an estimated one billion animals killed and around 11 million hectares of Australia’s pristine bushland razed,  TEG Dainty and TEG Live are proud and humbled to present a spectacular line up of artists to perform at FIRE FIGHT AUSTRALIA on Sunday 16 February 2020 at ANZ Stadium,Sydney Olympic Park to raise money for NATIONAL BUSHFIRE RELIEF.

FIRE FIGHT AUSTRALIA (#FireFightAustralia) will see ANZ Stadium play host to international and local music icons as they unite to share one stage for Australia during its time of need. FIRE FIGHT AUSTRALIA will be hosted by writer, actor and comedian Celeste Barber, who has already raised more than $50 million towards bushfire relief through her own record-breaking online appeal.

Collectively, this all-star list of performers has sold half a billion records. The 9+ hour concert offers revellers a unique opportunity to witness some of the most influential and successful songwriters of all time, all on the one stage and in the name of NATIONAL BUSHFIRE RELIEF.

FIRE FIGHT AUSTRALIA will kick off from 1pm and run till late at ANZ Stadium, Sydney Olympic Park on Sunday 16 February 2020.

Tickets go on sale at 12 Noon (AEDT) today at www.ticketek.com.au and are priced at $100, $85 and $70 with an option to make further contributions to bushfire relief during purchase. Ticketek Australia is the only authorised seller of FIRE FIGHT AUSTRALIA tickets. Do not pay more than the prices listed for your tickets.

All concert ticket profits and all contributions through Ticketek will go towards key organisations providing vital “Rescue”, “Relief and Recovery” and “Rehabilitation”.

Fans can also donate to bushfire relief through www.firefightaustralia.com.

Byron Bay singer-songwriter and one of Australia’s most loved musicians, Pete Murray has today released his new single, Take Me Down (out now), alongside the announcement of his sixth studio album, Camacho – available June 2.  […]

Scene News: IRON MAIDEN confirm a return to Australia on their spectacular LEGACY OF THE BEAST tour – check out PRE-SALE details here!

Tegan Voltaire, The Voltaire Twins
Anyone who welcomes a hairy, gold wearing, hot air blowing idiot to a dinner table is my scene.
Henry Wagons
Anywhere there is good company, great conversation, and a glass of red.
Helen Perris
Our gigs have an air of danger and sex. Beautiful women are free to express themselves and are as dangerous as hell. Everybody can have a good time ’cos there’s a lot of love in the room and we just can’t help but stomp out that primeval swamp boogie ooze.
Chris Russell’s Chicken Walk
Cool small bars with good food, good wine, good company
The Backsliders
All of the above and more in my shed every Friday night
Hound
All the wandering. The bastards and the angels. The sound of the rain and the pains of the heart. The silence. All the houses and all the rooms. All the keys and phones.
Raised By Eagles
Rock’n’Roll
About Heels on Decks
When I’m not working in the studio or doing shows I’m at home with my partner and our baby so I guess they are my scene.
Way of the Eagle
The TV show “Full House
World Wild
My scene is a Punk-hardcore scene or an underground, minimal electronic scene, something grungy – where everyone is wearing black. That’s my vibe; don’t go out until 11 when all the other vampires come out and go home when the sun comes up at 7. Oh shit. Creatures of the night.
Greg Puciato, Killer Be Killed & Dillinger Escape Plan
Flanelette pyjama pants.
Timberwolf
Obviously to create music. My family. I love driving my Ferraris.
Yngwie Malmsteen
My scene is Brunswick. I love it. It provides me with just about everything I need.
About Charlie Marshall
Experimental electronica, musical metacreation, multiplicitous media, hacking.
Ollie Brown
World/folk. Acoustic and proud of it!
Ilana Cravitz, The London Klezmer Quartet
The beach. Tea with gin at your grandparents house. They have the best stories.
Betty & Oswald
Our scene is folk that are interested in change. Not just music, but breaking the norm, the boundaries and stereotype of Australian ’rock/pop’ music. Unpredictable, the question marks, the new jokers in town. Don’t Believe The Haze.
Slumberhaze
Wherever there is music is where I feel most at home
Toby Robinson
Comedy, surreal show girls, burlesque and theatre
MC KREWD
Well these days my scene tends to revolve around my computer and being nudged by my dog to take her out for a walk. And then having my wife shout at me for spending time on my computer. I’m loving it actually. I’m quite relishing that scene. I miss them both very much.
Peter Hook, Joy Division/New Order/The Light
Country roots, old time, bluegrass, folk, Americana scene Traditional plus :)
Whitetop Mountaineers
No set scene. We have played with a variety of bands from King Parrot to The Datsuns. Offer us a show and give us a try!
Los Hombres Del Diablo
Local bands at sticky carpet venues. Vinyl. Social networking. Keeping healthy in order to play full throttle live sets. Loud rehearsals. Good people with creative ideas. PRIMITIVE ROCK.
Jon S Williams of City of Cool
Going to the river on sunny afternoons with the blow up dingys and resting your beers on lily pads.
The Frowning Clouds
Any scene with Al Swearangen & Mr. Wu from the show Deadwood ;)
Mathas
It’s Thonbury. It’s my dreaming. I’ve lived here 30 years and it’s evolved with me. The more I drink wine, the more wine bars appear in the neighbourhood. The more I eat, the more cafes appear in the neighbourhood. Fantastic.
Denise Scott, Comedian
My scene is finding any excuse to dance with my 2 year old daughter Ruby.
Matthew Hardy, Comedian