Best known for being the fastest, most powerful drummer who ever played in the iconic punk band the Ramones, Richie Ramone played Sooki Lounge in Belgrave, Melbourne on Wednesday 2 November 2016. The 59-year-old drummed and sang lead vocals, with Ronnie Simmons on lead guitar, Clare Misstake (AntiProduct) on bass, and Ben Reagan on rhythm guitar and drums – whenever Richie stepped out front during a set comprised of Ramones songs and tracks from his 2 solo albums.

Richie joined the Ramones in February 1983 and performed over 500 shows around the world with the punk legends from New York City, before his departure in August 1987. During this period, he wrote several critically-acclaimed and fan-favourite songs for the albums Animal Boy, Too Tough to Die and Halfway to Sanity, being the only Ramones drummer to be credited as the sole composer and writer of Ramones songs. This includes their hit Somebody Put Something in My Drink, which remained a staple in the Ramones set list until their final show in 1996. Richie is also the only Ramones drummer to sing lead vocals on Ramones songs. He received a Grammy Lifetime Achievement Award in 2011, when all three of the band’s drummers (Tommy, Marky and Richie Ramone) stood under the same roof for the first time ever.

About Paul Miles 162 Articles
Paul Miles is a rock photographer specializing in live music photography, who captures the true spirit of rock’n’roll in action by many of the world’s greatest performers. Over the years, he has shot a vast array of rock music photography: from gigs in world-famous clubs like the Apollo in Harlem and the Whisky a Go Go in Hollywood, to iconic arenas like New York City’s Madison Square Garden and Australia’s MCG, as well as in retail stores Barnes & Noble, Apple, and John Varvatos CBGBs.
Contact: Website Twitter 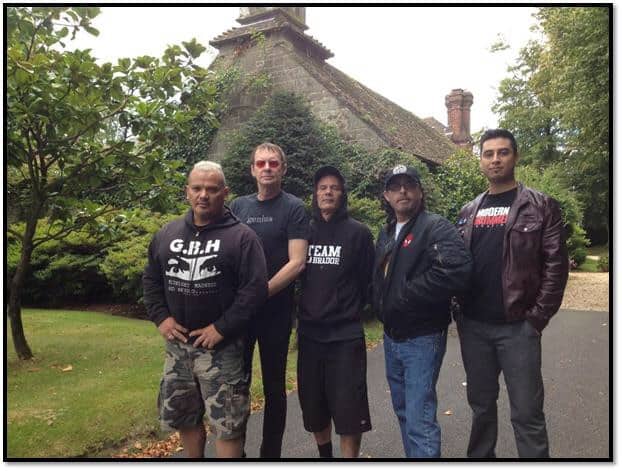 Well I’m still looking for my scene, and I think I might have found it. Between the pages of What’s My Scene Magazine.
Dave Faulkner, Hoodoo Gurus
The beach. Tea with gin at your grandparents house. They have the best stories.
Betty & Oswald

I love being on a little boat near home in South West Victoria with a fishing line in the water, the Sun coming up or going down. I also love walking the streets of Melbourne or Manhattan or many of the beautiful towns and villages of Ireland or anywhere. My partner and my family are central to it all. I also love being in the midst of a great music session, anywhere, anytime, being transported into the soul of the Universe.
Shane Howard
The car wash scene from Cool Hand Luke will do just fine thank you.
Old Gray Mule
It’s Thonbury. It’s my dreaming. I’ve lived here 30 years and it’s evolved with me. The more I drink wine, the more wine bars appear in the neighbourhood. The more I eat, the more cafes appear in the neighbourhood. Fantastic.
Denise Scott, Comedian

Tunes, mates, and honesty. No dickhead policy!
Buddha In A Chocolate Box
Well these days my scene tends to revolve around my computer and being nudged by my dog to take her out for a walk. And then having my wife shout at me for spending time on my computer. I’m loving it actually. I’m quite relishing that scene. I miss them both very much.
Peter Hook, Joy Division/New Order/The Light

I’m in with the Out-Crowd
Dave Warner
Art is my scene. No labels, restrictions or judgement. I love art in all it’s varied glory.
The Last 5 Queers

Cool small bars with good food, good wine, good company
The Backsliders
I like to be out in the nature, to get away. Go to the woods. My dad lives in the woods. Maybe once or twice a year I don’t have phone reception there is no Wi-Fi
Fredrik Åkesson, Opeth

I like to think that I belong to the head-strong Independent Music Scene – where we – musos and audience and everyone in between – all make gigs/tours, recordings, releases happen for ourselves and work our arses off to keep it going for the rest of our lives – all for the love of Music!
Florelie Escano
I have no idea what my scene is; I have been listening to Dubstep and a bit of Drum N Bass. I found a lot of Hip Hop and RnB stuff is getting very interesting again it is pushing different sounds out. I’ve been really into cycling since the early ‘90s; racing mountain bikes and racing road bikes. So between cycling and music there is not much time left, a bit of sleep now and again.
Mike Edwards, Jesus Jones

Currently its the Yarra River Trail I’m walking along. Generally my scene would be Melbourne. Nothing feels or compares to home.
Simon McConnell, The Delta Riggs
When I’m not working in the studio or doing shows I’m at home with my partner and our baby so I guess they are my scene.
Way of the Eagle
That’s a hard one, although I do love anything electronic with an indie-pop feel!
Franki

My scene is driving fast cars and shooting guns.
Ace Frehley
Our scene is in the city of Bath, a small city with a very big musical identity, we play the British festivals and I am also in the ’choirs scene’. We are also in other bands for fun, music all the way, roll on summer!
Su Hart, Baka Beyond

Right now it’s a room with no lights on. An unmade bed. A laptop with 9% battery and a mosquito that just refuses to die.
Dave Larkin, Dallas Crane
The Astor Theatre on chapel st. Old cinema with copious amounts of atmosphere playing classic films (Chaplin, Gene Kelly, Kubrick, etc) and me with a honeycomb choc top spilt on my Tshirt because that’s just how I roll.
Jude Perl, Comedian

Leadfinger is a very strange band, hard to define, but we are free.
Stew, Leadfinger
Melbourne. Nowhere else is as great as Melbourne.
Brat Farrar