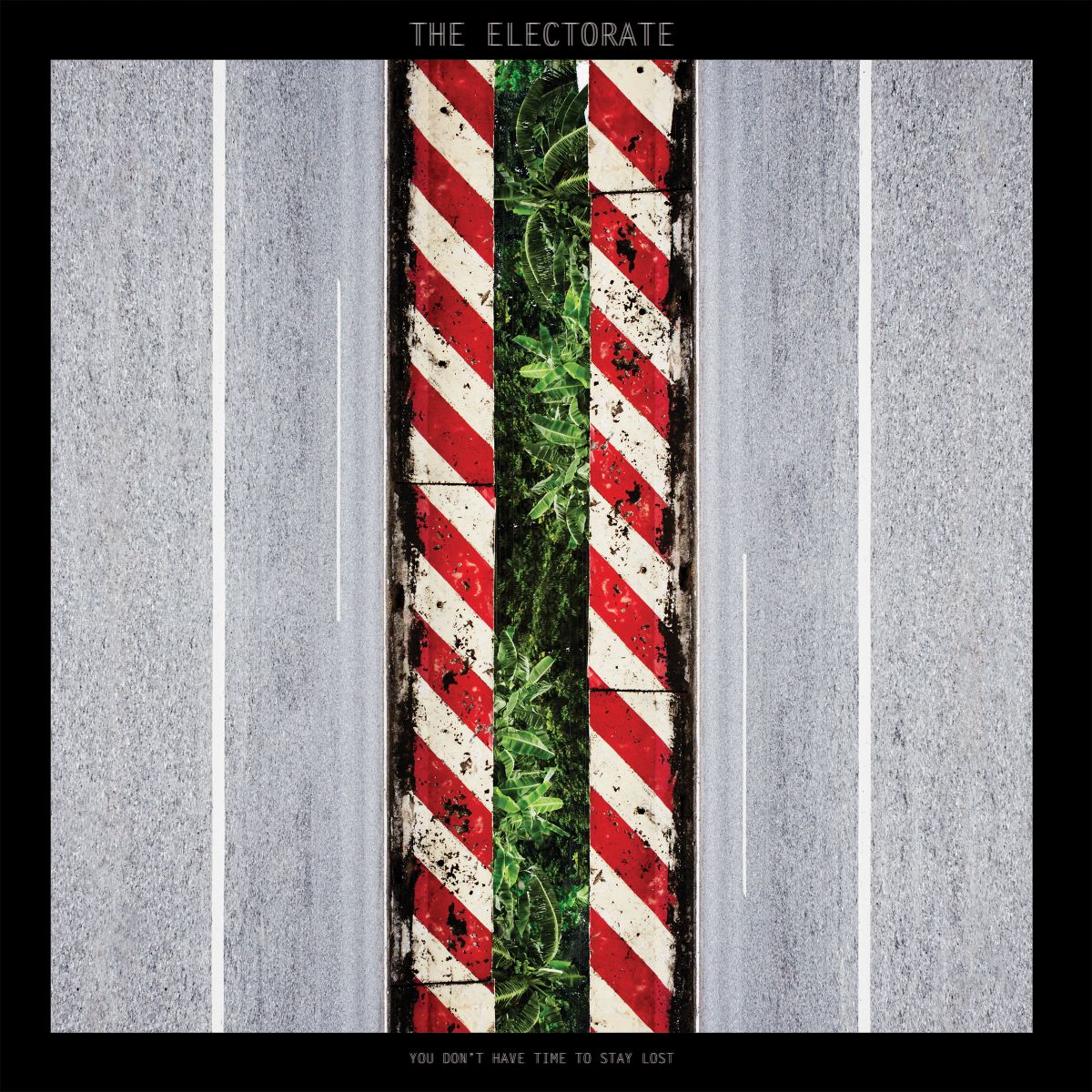 THE ELECTORATE are set to unleash their impressive debut album You Don’t Have Time To Stay Lost on September 18 through Templebear Records / MGM.  Laden with melodic choruses and bent-pop hooks, this dynamic indie-pop trio have a knack for planting that infectious earworm right into your head – as can be heard on the album’s first few released singles – If I Knew, Enormous Glorious Girl and Decades in A Day.

Featuring Eliot Fish (bass), Josh Morris (guitar) and Nick Kennedy (drums), who all share vocals, together the Sydney three-piece make a tight-knit unit following their many years of performing in bands such as Big Heavy Stuff, Knievel, The Apartments, Atticus, Imperial Broads and more…

You Don’t Have Time To Stay Lost was recorded by Tim Kevin (Youth Group, Holly Throsby, Peabody, Toby Martin and others) in his Tempe River Studios, and mastered by JJ Golden (Soundgarden, Neko Case, Calexico, Sharon Jones and The Dap-Kings) in sunny California.

As seen on RAGE, the album’s latest single Decades in A Day is accompanied by a mesmerising clip, directed by Alex O Smith (Coldplay’s ‘Yellow’, Peaches & Iggy Pop’s ‘Kick It’, Pivot’s ‘In The Blood’).

DECADES IN A DAY
Produced by Alex O Smith

Of the record (available in many formats including limited edition vinyl & cassette), the band are excited to see its release finally.  “Our debut album You Don’t Have Time To Stay Lost has been a long time coming.

See, once upon a time, we were known as The Templebears.  We were demoing our first album when we broke up, splintering into two camps – Nick and Eliot joined Big Heavy Stuff, and Josh started Atticus.  Since then we’ve played in The Apartments, Knievel, Imperial Broads, Reality Instructors and more.

Years went by.  Quite a few.  In 2015, we played a one- off benefit.  As we came offstage, we knew we had to finally finish what we’d started, so long ago.

You Don’t Have Time To Stay Lost has songs from then, and songs from now, and songs that have been left alone, and songs that have been poked and prodded.  This bent pop collection celebrates small suburban spaces, wide open landscapes and deep dark oceans.  We twist and stretch rhythms, guitars, and vocals into new forms that feel like old friends.  We question our entitlement, our politics, our love, and how to battle the plastic containers of our kitchens.”

You don’t have time to stay lost, good thing we’ve found The Electorate.

Member of Band:  Ben Leece & Left of the Dial        When did you first start playing music?  13  Which artist influenced your music? Paul Westerberg  Tell us about your latest single/album/tour. Paper Thin is my […]

When did you first start playing music? I’ve been performing as a solo artist for the past decade, releasing 3 self-produced EP’s, touring Australia and North America and earlier this year releasing my debut LP […]

English singer-songwriter LUCY SPRAGGAN heads to Australia for the very first time this April, where she will play a run of intimate venues in Melbourne, Sydney and Brisbane.   With five albums under her belt […]

The car wash scene from Cool Hand Luke will do just fine thank you.
Old Gray Mule
That’s a hard one, although I do love anything electronic with an indie-pop feel!
Franki
I like to think that I belong to the head-strong Independent Music Scene – where we – musos and audience and everyone in between – all make gigs/tours, recordings, releases happen for ourselves and work our arses off to keep it going for the rest of our lives – all for the love of Music!
Florelie Escano
All the kids who weren’t cool at school and still aren’t. Those people who didn’t manage to become awesome artists and uber hip performers. The raggy dolls who never found a way to make their raggy doll-ness work for them.
Jonathon Duffy
The beach. Tea with gin at your grandparents house. They have the best stories.
Betty & Oswald
Alice likes the Google. Sime likes taxidermy. It’s a pretty happening scene.
Sweet Jean
We can be dirty, we can be imperfect, we can be classy, it doesn’t matter. We drift between scenes and eventually may just create our own.
The Ugly Kings
I think my style is more just making cameos in everyone else’s scene.
Mojo Juju
All of the above and more in my shed every Friday night
Hound
My scene is Brunswick. I love it. It provides me with just about everything I need.
About Charlie Marshall
Cool venues with good beer on tap that don’t mind us getting loud and getting room grooving so hard you feel the floor shaking.
Papa G and The Starcats
Art is my scene. No labels, restrictions or judgement. I love art in all it’s varied glory.
The Last 5 Queers
The dog park’s pretty good. I have a couple of miniature pinchers. And they’re the loves of my life. I take them for walks to the dog park; I’ve got a Harley Davidson I ride around. It’s not too exciting. It used to be sex, drugs and rock n roll; now I walk my dogs.
Stan Lee, The Dickies
Currently its the Yarra River Trail I’m walking along. Generally my scene would be Melbourne. Nothing feels or compares to home.
Simon McConnell, The Delta Riggs
Beer, riffs, good people, good food and new adventures, anywhere those things exist, that’s my scene!
Andy, Don Fernando
Experimental electronica, musical metacreation, multiplicitous media, hacking.
Ollie Brown
World/folk. Acoustic and proud of it!
Ilana Cravitz, The London Klezmer Quartet
Anyone who welcomes a hairy, gold wearing, hot air blowing idiot to a dinner table is my scene.
Henry Wagons
I don’t wish to belong to any scene that would have me as a member (with thanks to Groucho Marx).
Bob Spencer, Raw Brit
Anywhere there is good company, great conversation, and a glass of red.
Helen Perris
Scones, savory, sweet I don’t mind
The Wooden Sky
My scene is at the moment Big Wongs General Tsos Chicken as I get sauce on the keys typing to you :-)
Brian Mackey
Obviously to create music. My family. I love driving my Ferraris.
Yngwie Malmsteen
What’s my scene? well…
And another thing I’ve been wondering lately
Oh, baby,
Tell me where have you been?
Now the stage is set
Where’s my Juliet, baby?
Is it maybe
My Midsummer Night’s Dream?
What’s my scene?
Clowns
Book clubs, philosophy and extreme black metal
Elsen Price
My scene is finding any excuse to dance with my 2 year old daughter Ruby.
Matthew Hardy, Comedian
I just do my best to live a life full of the things I love. Rock’n’roll, photography, New York City – they are three things right there that I love a lot!
Paul Miles
Well I’m still looking for my scene, and I think I might have found it. Between the pages of What’s My Scene Magazine.
Dave Faulkner, Hoodoo Gurus
Any scene with Al Swearangen & Mr. Wu from the show Deadwood ;)
Mathas
Aside from music and everything creative, I love open-mind people, unexpected humour, seeing the world and nature, riding my bicycle, playing billiards. I’m also a fan of coffee, whiskey and most things vintage.
Jessica Stuart Few
Flanelette pyjama pants.
Timberwolf
Fuck the Fucking Scene question! xo
Fuck The Fitzroy Doom Scene
My scene is a Punk-hardcore scene or an underground, minimal electronic scene, something grungy – where everyone is wearing black. That’s my vibe; don’t go out until 11 when all the other vampires come out and go home when the sun comes up at 7. Oh shit. Creatures of the night.
Greg Puciato, Killer Be Killed & Dillinger Escape Plan
Act III, Scene VI of King Lear. A tense and gripping scene wherein the ageing king informs his three daughters that they have all been accepted as contestants on Family Feud.
Ben Pobjie, comedian
Rock’n’Roll
About Heels on Decks
Ep. 1 Series 3 of BBC’s ’Sherlock’ where Sherlock bungee jumps through a window and kisses Molly Hooper.
Miss Adelaide Everheart from Early Burley Burlesque
“Malcolm Hill is a lifetime member of the Melbourne Music Mafia and part of the ratpack of post punk Melbourne artists who have been keepin’ it real across diverse art forms for thirty years.”
Malcolm Hill
Hiking a 14K foot mountain in Colorado
Cole Washburn
Staying home out of harms way.
Peter Milley, Cairo Club Orchestra
Deep 70s disco, wonky synths, shady lyrics, fairy lights and cheap wine.