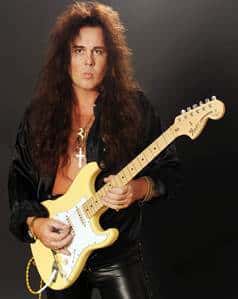 Yngwie J. Malmsteen has been blowing minds across the globe with his incredible guitar skills and showmanship for over 35 years and in June 2015, Yngwie and his band will be returning to Australia and New Zealand for the first time in a decade to strike awe into the legions of guitar fans.

With the release of the brand new 2CD+DVD album Live In Tampa the excitment levels are reaching fever pitch. Tombowler apologies to the tousands of fans who will now be on tenderhooks until June but we are thrilled and genuinly appreciative that Yngwie has been able to lock the new dates in. Quite simply, ten years is far too long since Yngwie and band have rocked downunder and out anticipation for what are sure to be absolutely stunning shows is building like a feedback loop.

The Swedish born, but now US based, guitar legend is venerated as one of the founders of the art of guitar shredding. His neo-classical style and the sheer speed of his playing made him the most notable musician in the genre, and he has influenced a new era of music and guitarists alike.

But Yngwie is not known purely for the speed with which his fingers fly up and down the guitar neck. Yes, Malmsteen’s playing is fast, but there’s a crystal clarity to each of his notes that few can imitate. From his ground breaking early work with Steeler and Alcatraz, through his time alongside Joe Satriani and Steve Vai as a member of G3, to his more recent forays leading the Guitar Gods there are few that can compare to Yngwie J. Malmsteen.

Over more than 25 astounding albums the Grammy nominated Malmsteen has unleashed countless fretboard blistering solos, with both Fender and Marshall honouring him with his own model guitar and amplifier.

Don’t miss your chance to see the Master of the Stratocaster live in person, and for those extra dedicated fans there are still a handful of VIP tickets available granting access to an exclusive Q&A session, and for a few very lucky fans the extremely rare opportunity to meet Yngwie J. Malmsteen in person.

“Far from just being a high-speed and volume artist, his deep knowledge of music theory differentiates him from other shredders.” – High Octane Music News