By popular demand, The Wolfe Brothers have announced they will take their
Country Heart – three artists, three nations, one massive night of country
music – tour to the Tamworth Country Music Festival in 2019. Get ready
country music fans – this is going to be huge! With special guests,
Canada’s #1 Male Country Music Artist Gord Bamford and New Zealand’s Female
Country Artist Jody Direen, audiences at Tamworth better get ready to
party!

For Tom Wolfe, this special version of The Wolfe Brothers’ Country Heart
tour, which they are touring throughout September and October 2018, is
really about bringing all country music fans together. It is essentially,
about getting to the country heart – and showing that heart to audiences.
The show is jam-packed with energy, fun, fantastic songs, great stories,
and of course, a lot of country music. “We love to showcase country music
in its many formats,” says Tom. “There is something in this concert for
everyone.”

Heading to Tamworth Country Music Festival is always a highlight for the
band. They’ve been making the annual pilgrimage for years and plan their
calendars around it. Tom says they wouldn’t miss it for the world and love
that they can bring some mates along with them to share the ride. “The
festival is full of great music, mates and great times,” he says. “It
is a highlight every year, we wouldn’t miss it.”

Bringing special guests to Tamworth this year is an exciting prospect for
The Wolfe Brothers – and what great guests they are! Gord Bamford is a
multi-award-winning legend in Canada. Voted Canada’s Male Artist Of The
Year on three occasions, Gord brings his good old boy, beer drinkin’
country party attitude to his shows and is fast building a big fan base in
Australia after performing at the nation’s biggest festivals over the last
two years. New Zealand’s current Female Artist Of The Year Jody Direen is
considered one of the hottest artists on the scene today in her home
country. After winning the Best Country Album award for her Shake Up CD at
the last New Zealand Country Music Awards, Jody signed a deal with ABC
Music in Australia.

Having performed shows with both Gord and Jody in the past, they know that
an evening in their company is one that is entertainment from start to
finish! In fact, this is the second time Jody has joined The Wolfe Brothers
at Tamworth, she was the special guest at their show in January 2018. “We
love them both,” says Tom. “Jody is so positive and so much fun to be
around. Gord has become really close to us. We get on like brothers.”

That brotherly camaraderie will see The Wolfe Brothers head overseas after
their Tamworth Country Music Festival show in 2019. They’re already working
on travel plans to Canada – to work with Gord in his hometown. “We’re not
ones to sit still,” says Tom of their plans for 2019. “There are a lot
of new songs being written and we are planning to write more. There is a
lot more touring to be done… touring is something we all enjoy so bring
it on!” 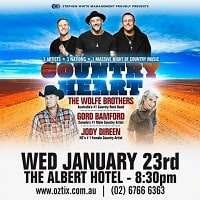 Aside from music and everything creative, I love open-mind people, unexpected humour, seeing the world and nature, riding my bicycle, playing billiards. I’m also a fan of coffee, whiskey and most things vintage.
Jessica Stuart Few
It’s Thonbury. It’s my dreaming. I’ve lived here 30 years and it’s evolved with me. The more I drink wine, the more wine bars appear in the neighbourhood. The more I eat, the more cafes appear in the neighbourhood. Fantastic.
Denise Scott, Comedian
I will continue the continuum, singing my Songline.
Kutcha Edwards
Rock’n’Roll
About Heels on Decks
My scene is driving fast cars and shooting guns.
Ace Frehley
Act III, Scene VI of King Lear. A tense and gripping scene wherein the ageing king informs his three daughters that they have all been accepted as contestants on Family Feud.
Ben Pobjie, comedian
I’m in with the Out-Crowd
Dave Warner
Our scene is this big gorgeous wide world we live in all its majestic splendour!
Kim Salmon, The Darling Downs
It’s beards.
Nathaniel Beard, The Beards
Flanelette pyjama pants.
Timberwolf
Scones, savory, sweet I don’t mind
The Wooden Sky
My scene is a Punk-hardcore scene or an underground, minimal electronic scene, something grungy – where everyone is wearing black. That’s my vibe; don’t go out until 11 when all the other vampires come out and go home when the sun comes up at 7. Oh shit. Creatures of the night.
Greg Puciato, Killer Be Killed & Dillinger Escape Plan
The Astor Theatre on chapel st. Old cinema with copious amounts of atmosphere playing classic films (Chaplin, Gene Kelly, Kubrick, etc) and me with a honeycomb choc top spilt on my Tshirt because that’s just how I roll.
Jude Perl, Comedian
I love being on a little boat near home in South West Victoria with a fishing line in the water, the Sun coming up or going down. I also love walking the streets of Melbourne or Manhattan or many of the beautiful towns and villages of Ireland or anywhere. My partner and my family are central to it all. I also love being in the midst of a great music session, anywhere, anytime, being transported into the soul of the Universe.
Shane Howard
Well I’m still looking for my scene, and I think I might have found it. Between the pages of What’s My Scene Magazine.
Dave Faulkner, Hoodoo Gurus
Experimental electronica, musical metacreation, multiplicitous media, hacking.
Ollie Brown
Hot, hot lovers
Luke Monks, Gay Paris
What’s my scene? well…
And another thing I’ve been wondering lately
Oh, baby,
Tell me where have you been?
Now the stage is set
Where’s my Juliet, baby?
Is it maybe
My Midsummer Night’s Dream?
What’s my scene?
Clowns
Deep 70s disco, wonky synths, shady lyrics, fairy lights and cheap wine.