Saluting artistic excellence and achievement on Australian stages over the past year, twenty three prestigious Helpmann Awards were presented in the categories of comedy, cabaret, contemporary music, musicals, opera, classical music, theatre and ballet, dance and physical theatre. These Awards complement the 20 Awards announced last night at the 2019 Helpmann Awards Act I. 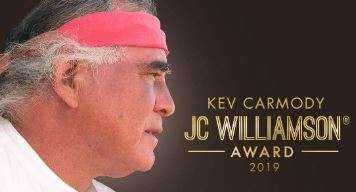 In addition, the 2019 JC Williamson Award was presented by Paul Kelly AO to the legendary singer-songwriter Kev Carmody, for his outstanding contribution to the live performance industry.

The Helpmann Awards were established in 2001 by Live Performance Australia (LPA). Richard Evans, President of LPA, said “We are proud to present the 19h Annual Helpmann Awards in Melbourne this year for the very first time. The breadth and diversity of Winners, Nominees and performances at tonight’s and yesterday’s events shines a spotlight on Australia’s world-class creative and artistic talent. Congratulations to all 2019 Helpmann Award Nominees and Winners!”

In a world first, the cast of HARRY POTTER AND THE CURSED CHILD performed an exclusive montage at the play’s Australian home, Melbourne’s Princess Theatre, which was beamed live to the thrilled 2019 Helpmann Awards audience at Arts Centre Melbourne’s State Theatre.

The Helpmann Awards Act II was preceded by the Red Carpet Walk with its fun and fabulous frocks, hosted by colourful comedienne Cal Wilson. The celebrations continued late into the night with the After Party at the Sofitel Melbourne on Collins.

Yesterday, the 2019 Helpmann Awards Act I saw the gravitas of Australia’s most prestigious live

theatre and entertainment awards meet the atmosphere of a sophisticated jazz lounge, for an up close, upbeat, exclusive industry-only night to remember.

The Helpmann Awards were established in 2001 by Live Performance Australia (LPA).

2019 Helpmann Awards was BROADCAST LIVE on ABC Comedy Channel. It will be repeated on ABC TV on Sunday 21 July at 10pm. Catch up anytime on iView.

The Helpmann Awards are proudly supported by the Victorian Government, via its tourism marketing agency, Visit Victoria.

For more information, go to: www.helpmannawards.com.au

The countdown to the premier celebration of Australia’s vibrant live performance industry is on following tonight’s announcement of the 2015 Helpmann Awards nominees. The nominees were announced at simultaneous events in Sydney, Melbourne, Adelaide, Brisbane, […]

Her Majesty’s Theatre Monday 22nd June Photos by Mary Boukouvalas To see the list of nominees read the press release.

Scene News: Billy Elliot the Musical will return to Australia in 2019 for its 10thAnniversary Tour.

Staying home out of harms way.
Peter Milley, Cairo Club Orchestra
Bed. Pringles. Whisky. Attenborough doco. Wham.
Marlon Williams
I like to be out in the nature, to get away. Go to the woods. My dad lives in the woods. Maybe once or twice a year I don’t have phone reception there is no Wi-Fi
Fredrik Åkesson, Opeth
No set scene. We have played with a variety of bands from King Parrot to The Datsuns. Offer us a show and give us a try!
Los Hombres Del Diablo
Scones, savory, sweet I don’t mind
The Wooden Sky
I like the beach more than anything. The beach feels like home all year round. In terms of a scene…I actually prefer to hermit most of the time.
Abbe May
Well I’m still looking for my scene, and I think I might have found it. Between the pages of What’s My Scene Magazine.
Dave Faulkner, Hoodoo Gurus
I’m in with the Out-Crowd
Dave Warner
I am a simple man. My scene is simple. I like playing metal and spending time with my family.
Waclaw ”Vogg” Kieltyka, Decapitated
Deep 70s disco, wonky synths, shady lyrics, fairy lights and cheap wine.