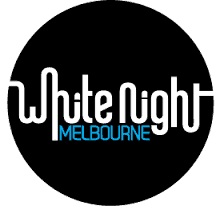 Minster for Tourism and Major Events, Hon John Eren said today, “In just under a month, White Night Melbourne will turn our city into a cultural playground for locals and visitors.  In three short years, White Night Melbourne has become a highlight of Victoria’s major events calendar, stimulating the State’s economy and providing our creative industries with a platform to showcase their work locally, nationally and internationally”.

The full programme is now confirmed and features more than 80 free events and activities with artists from Victoria and around Australia as well as France, Portugal, Greece, Canada, UK, USA and Morocco.

Highlights from the second release of the programme announced today include a large format flame sculpture The Crucible at Birrarung Marr, the State Library façade will amaze with a tribute to the classic tale of Alice in Wonderland with Rabbit Hole, Circles of Light in the Queen Victoria Gardens will offer the chance to interact and experiment with an electronic herbarium of plant life with emotions, Chapter House will come alive with sculptural installations Everything is Just Something and the Melbourne Athenaeum’s inflatable sculptures Illuminate Athena.

The White Night Melbourne music programme has been expanded this year to include the Music for a World Stage on Melbourne Museum forecourt.  Programmed by Ali Bird, the line-up features Tek Tek Ensemble, Bobby Singh and Jeff Lang, Stella Angelico, The Public Opinion Afro Orchestra, Cumbia Cosmonauts, Ngaiire and BRIGGS.

Jazz returns this year with the Jazz @ The Forum line-up programmed by Julie O’Hara.  Artists include The Cairo Club Orchestra, Tijuana Peanuts, Movement 9, Mingus Amongst Us, The Band Who Knew Too Much, Emma D & The Putbacks, Madmen, Swing Sunrise with the Furbellows and a special performance from Los Cabrones who are reuniting after a 3 year break to celebrate their 20th Birthday.

Other musical highlights announced today include all night classical music performances inside the Block Arcade with Baroque at The Block.

Artistic Director Andrew Walsh reminds visitors that, “White Night Melbourne 2015 will once again transform the city and showcase an array of performances and installations from both local and international artists. See the beauty of the 4 Elements come to life on the façade of the Royal Exhibition Building, experience the transformation of the Yarra River and Birrarung Marr into a Little India in Sita’s Garden and watch luminous plastic bodies dance across the National Gallery of Victoria as part of KEYFRAMES.  Remember that whatever time you arrive you will have the same experience, so there’s no need to worry about missing out. Come early or come late, and most of all have a great night.”

The full programme, map and public transport information can be found at http://whitenightmelbourne.com.au/

Rolling Stone are thrilled to bring the fourth annual Rolling Stone Live Lodge to Melbourne for a second time in 2016, taking over The Workers Club in Fitzroy for three entertainment-packed weeks from September 21 – […]

Tegan Voltaire, The Voltaire Twins
My scene is finding any excuse to dance with my 2 year old daughter Ruby.
Matthew Hardy, Comedian
Beer, riffs, good people, good food and new adventures, anywhere those things exist, that’s my scene!
Andy, Don Fernando
Wherever there is music is where I feel most at home
Toby Robinson
All of the above and more in my shed every Friday night
Hound
We can be dirty, we can be imperfect, we can be classy, it doesn’t matter. We drift between scenes and eventually may just create our own.
The Ugly Kings
My family, my friends, my home.
Cory Putman, Norma Jean
Alice likes the Google. Sime likes taxidermy. It’s a pretty happening scene.
Sweet Jean
I don’t wish to belong to any scene that would have me as a member (with thanks to Groucho Marx).
Bob Spencer, Raw Brit
All the wandering. The bastards and the angels. The sound of the rain and the pains of the heart. The silence. All the houses and all the rooms. All the keys and phones.
Raised By Eagles
“Malcolm Hill is a lifetime member of the Melbourne Music Mafia and part of the ratpack of post punk Melbourne artists who have been keepin’ it real across diverse art forms for thirty years.”
Malcolm Hill
I think my style is more just making cameos in everyone else’s scene.
Mojo Juju
Hiking a 14K foot mountain in Colorado
Cole Washburn
My bedroom
Nantes
No set scene. We have played with a variety of bands from King Parrot to The Datsuns. Offer us a show and give us a try!
Los Hombres Del Diablo
I love being on a little boat near home in South West Victoria with a fishing line in the water, the Sun coming up or going down. I also love walking the streets of Melbourne or Manhattan or many of the beautiful towns and villages of Ireland or anywhere. My partner and my family are central to it all. I also love being in the midst of a great music session, anywhere, anytime, being transported into the soul of the Universe.
Shane Howard
I’m in with the Out-Crowd
Dave Warner
Currently its the Yarra River Trail I’m walking along. Generally my scene would be Melbourne. Nothing feels or compares to home.
Simon McConnell, The Delta Riggs
That’s a hard one, although I do love anything electronic with an indie-pop feel!
Franki
What’s my scene? well…
And another thing I’ve been wondering lately
Oh, baby,
Tell me where have you been?
Now the stage is set
Where’s my Juliet, baby?
Is it maybe
My Midsummer Night’s Dream?
What’s my scene?
Clowns
My scene is a Punk-hardcore scene or an underground, minimal electronic scene, something grungy – where everyone is wearing black. That’s my vibe; don’t go out until 11 when all the other vampires come out and go home when the sun comes up at 7. Oh shit. Creatures of the night.
Greg Puciato, Killer Be Killed & Dillinger Escape Plan
Hot, hot lovers
Luke Monks, Gay Paris
I like to be out in the nature, to get away. Go to the woods. My dad lives in the woods. Maybe once or twice a year I don’t have phone reception there is no Wi-Fi
Fredrik Åkesson, Opeth
Cool small bars with good food, good wine, good company
The Backsliders
The beach. Tea with gin at your grandparents house. They have the best stories.
Betty & Oswald
Any scene with Al Swearangen & Mr. Wu from the show Deadwood ;)
Mathas
Anywhere there is good company, great conversation, and a glass of red.
Helen Perris
Our gigs have an air of danger and sex. Beautiful women are free to express themselves and are as dangerous as hell. Everybody can have a good time ’cos there’s a lot of love in the room and we just can’t help but stomp out that primeval swamp boogie ooze.
Chris Russell’s Chicken Walk
Art is my scene. No labels, restrictions or judgement. I love art in all it’s varied glory.
The Last 5 Queers
Our scene is this big gorgeous wide world we live in all its majestic splendour!
Kim Salmon, The Darling Downs
If you’re a Max Chillington then you’re our scene.
Gunslingers
I have no idea what my scene is; I have been listening to Dubstep and a bit of Drum N Bass. I found a lot of Hip Hop and RnB stuff is getting very interesting again it is pushing different sounds out. I’ve been really into cycling since the early ‘90s; racing mountain bikes and racing road bikes. So between cycling and music there is not much time left, a bit of sleep now and again.
Mike Edwards, Jesus Jones