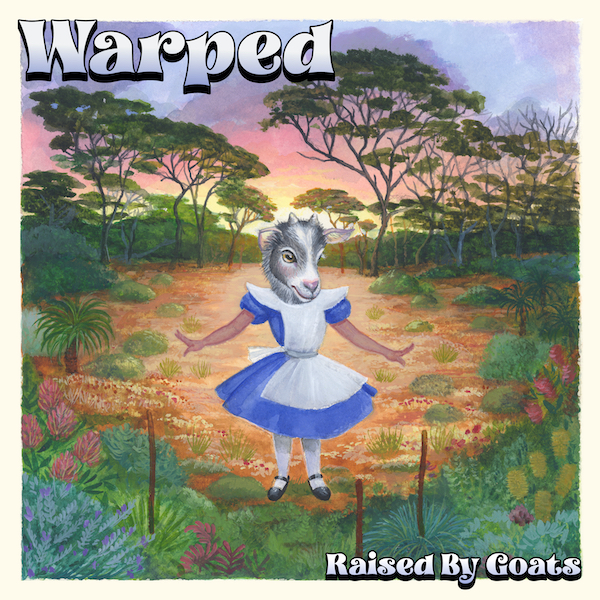 Hailing from Geelong, Australia WARPED are a 3-piece band that have been around the traps for 30 years and are highly respected scene veterans. WARPED have earned a deal with Golden Robot Records and have now released their new single Raised By Goats.

WARPED bring you a crunchy hard garage sound that blends in some chunky desert rock with an added Henry Rollins-esque aggression.

Raised By Goats features crunching riffs and bombastic beats that are matched by intense and angsty vocals. It is highlighted by tongue in cheek lyrics about cults and urban myth conspiracy theories. What else do you want to go out with a bang for 2020. 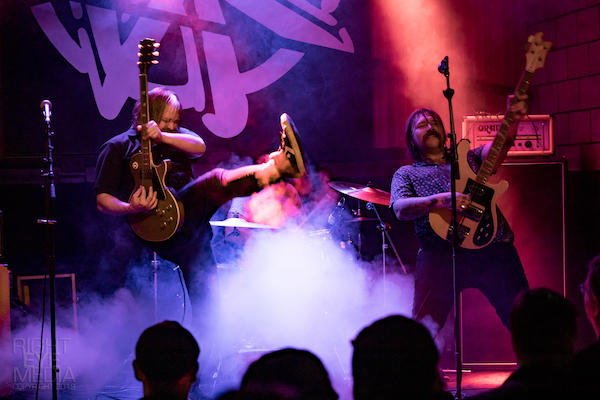 ABOUT WARPED
Barely into high school, Ben Watkins with his childhood accomplice in hi-jinx, Cris Wilson, formed Warped in their hometown of Geelong. Cris on drums, Ben on guitar. 30 years later they are considered veterans of the Aussie Rock ’n’ roll scene.

Warped now stand as a solid 3-piece Benny, Cris and Sammy on bass. In 2018 Warped released Bolt From The Blue. This record is just the latest in a large catalogue of blistering rock ’n’ roll.

Warped have been fortunate to share the stage with some of the bands that they love and who helped mould their sound and shape their musical inclinations. Playing with The Melvins, Fu Manchu, Wayne Kramer, Dinosaur Jr and The Dwarves, as well as buddies – Magic Dirt, Bored and Asteroid B612.

Warped have been quoted as “An evolving rock ’n’ roll ANIMAL” and that’s the truth! If you dig timeless, hard, fast and original rock ’n’ roll then Warped needs a listen. For 30 years Warped have evolved and created a sound like no other.

For those of us who cut their music-loving teeth on pub bands of the ‘80s and ‘90s, nothing warms the cockles of the heart more than seeing a crowd favourite strike up the strings and […]

To celebrate the 30th Anniversary of one of the most iconic Australian Releases of all time THE MARK OF CAIN’s ‘Battlesick’, Golden Robot Records are honoured to be releasing it as a limited edition remastered […]

For those of us who cut their music-loving teeth on pub bands of the ‘80s and ‘90s, nothing warms the cockles of the heart more than seeing a crowd favourite strike up the strings and […]

Tegan Voltaire, The Voltaire Twins
I love being on a little boat near home in South West Victoria with a fishing line in the water, the Sun coming up or going down. I also love walking the streets of Melbourne or Manhattan or many of the beautiful towns and villages of Ireland or anywhere. My partner and my family are central to it all. I also love being in the midst of a great music session, anywhere, anytime, being transported into the soul of the Universe.
Shane Howard
Rock’n’Roll
About Heels on Decks
Cool small bars with good food, good wine, good company
The Backsliders
The car wash scene from Cool Hand Luke will do just fine thank you.
Old Gray Mule
Melbourne. Nowhere else is as great as Melbourne.
Brat Farrar
Currently, I’m completely enveloped by writing my book; trying to complete the manuscript for my tome.
Jeff Duff
Yass KFC
Simon, Loon Lake
Staying home out of harms way.
Peter Milley, Cairo Club Orchestra
Hiking a 14K foot mountain in Colorado
Cole Washburn
Experimental electronica, musical metacreation, multiplicitous media, hacking.
Ollie Brown
I think my style is more just making cameos in everyone else’s scene.
Mojo Juju
The Astor Theatre on chapel st. Old cinema with copious amounts of atmosphere playing classic films (Chaplin, Gene Kelly, Kubrick, etc) and me with a honeycomb choc top spilt on my Tshirt because that’s just how I roll.
Jude Perl, Comedian
I like to think that I belong to the head-strong Independent Music Scene – where we – musos and audience and everyone in between – all make gigs/tours, recordings, releases happen for ourselves and work our arses off to keep it going for the rest of our lives – all for the love of Music!
Florelie Escano
It’s Thonbury. It’s my dreaming. I’ve lived here 30 years and it’s evolved with me. The more I drink wine, the more wine bars appear in the neighbourhood. The more I eat, the more cafes appear in the neighbourhood. Fantastic.
Denise Scott, Comedian
Beer, riffs, good people, good food and new adventures, anywhere those things exist, that’s my scene!
Andy, Don Fernando
My bedroom
Nantes
My scene is Brunswick. I love it. It provides me with just about everything I need.
About Charlie Marshall
It’s a delirium, really, but I like to live like this.
Hugo Race
That’s a hard one, although I do love anything electronic with an indie-pop feel!
Franki
My scene is at the moment Big Wongs General Tsos Chicken as I get sauce on the keys typing to you :-)
Brian Mackey
All the wandering. The bastards and the angels. The sound of the rain and the pains of the heart. The silence. All the houses and all the rooms. All the keys and phones.
Raised By Eagles
I just do my best to live a life full of the things I love. Rock’n’roll, photography, New York City – they are three things right there that I love a lot!
Paul Miles
Sitting in the sun, in a nice chair, with a good book.
James Reyne
Art is my scene. No labels, restrictions or judgement. I love art in all it’s varied glory.
The Last 5 Queers
No set scene. We have played with a variety of bands from King Parrot to The Datsuns. Offer us a show and give us a try!
Los Hombres Del Diablo
Our scene is this big gorgeous wide world we live in all its majestic splendour!
Kim Salmon, The Darling Downs
Leadfinger is a very strange band, hard to define, but we are free.
Stew, Leadfinger
I don’t wish to belong to any scene that would have me as a member (with thanks to Groucho Marx).
Bob Spencer, Raw Brit