Following the release of ‘To The Bone’, his most successful album to date, Steven will perform 3hrs of mesmerising music drawn from both his recent catalogue, as well as classic Porcupine Tree songs, some of which have never previously been performed by his solo band.

Those whom have previously witnessed Steven Wilson live in concert will already be acquainted with the breathtaking wonderment and beauty of Steven’s lavish mindscape, which provides a perfect adjunct to his otherworldly music. Steven has outdone even the magnificence of previous tours to present an awe-inspiring kaleidoscope of evocative imagery and colour.

Join Steven Wilson this November for what will uncountably be a series of concerts never to be forgotten.

“An absolute triumph both sonically, musically and visually.  This was top class stuff and you`ll be hard pushed to see a better show this year.” Metal Express

“Who needs drugs when you can have your mind blown by the King of Prog?” Maximum Volume Music

“Where do I begin? This spectacle took things to a whole different level. The best gig I’ve been to in many years!” Midlandsmetalheads.com

Photography and video whether by phone, camera or any other device is strictly prohibited for this concert. 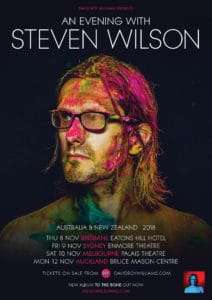 VIP tickets are available for purchase as an additional ticket for this tour.

Questions for Q&A will be selected from those submitted to DRW Entertainment by VIPs via email and will be proffered by a moderator.

Steven’s band will not attend Meet and Greet, nor Q&A session.

Punk is not an anachronistic genre. With its raw, unadulterated sounds and lyrics telling of corruption, inequity, war, disillusion, power and powerlessness and so on, we could well be in Thatcher’s Britain or any other […]

In the last few years Tim Wheeler‘s scene has somewhat diverged from when he was “a teenager, in a plaid shirt, playing in a three-piece rock band, in the days of Nirvana” to a different […]

Well THE DARKNESS fans are standing up and putting their hands in their pocket as the first Melbourne Show on Wednesday 3rd May at  170 Russell, Melbourne sold out in less than 30 minutes!! We […]

I like to be out in the nature, to get away. Go to the woods. My dad lives in the woods. Maybe once or twice a year I don’t have phone reception there is no Wi-Fi
Fredrik Åkesson, Opeth
I think my style is more just making cameos in everyone else’s scene.
Mojo Juju
That’s a hard one, although I do love anything electronic with an indie-pop feel!
Franki
Act III, Scene VI of King Lear. A tense and gripping scene wherein the ageing king informs his three daughters that they have all been accepted as contestants on Family Feud.
Ben Pobjie, comedian
Going to the river on sunny afternoons with the blow up dingys and resting your beers on lily pads.
The Frowning Clouds
I am a simple man. My scene is simple. I like playing metal and spending time with my family.
Waclaw ”Vogg” Kieltyka, Decapitated
Art is my scene. No labels, restrictions or judgement. I love art in all it’s varied glory.
The Last 5 Queers
The beach. Tea with gin at your grandparents house. They have the best stories.
Betty & Oswald
All of the above and more in my shed every Friday night
Hound
If you’re a Max Chillington then you’re our scene.
Gunslingers
Our gigs have an air of danger and sex. Beautiful women are free to express themselves and are as dangerous as hell. Everybody can have a good time ’cos there’s a lot of love in the room and we just can’t help but stomp out that primeval swamp boogie ooze.
Chris Russell’s Chicken Walk
Obviously to create music. My family. I love driving my Ferraris.
Yngwie Malmsteen
Tunes, mates, and honesty. No dickhead policy!
Buddha In A Chocolate Box
Cool small bars with good food, good wine, good company
The Backsliders
Ep. 1 Series 3 of BBC’s ’Sherlock’ where Sherlock bungee jumps through a window and kisses Molly Hooper.
Miss Adelaide Everheart from Early Burley Burlesque
Well these days my scene tends to revolve around my computer and being nudged by my dog to take her out for a walk. And then having my wife shout at me for spending time on my computer. I’m loving it actually. I’m quite relishing that scene. I miss them both very much.
Peter Hook, Joy Division/New Order/The Light
My scene is a Punk-hardcore scene or an underground, minimal electronic scene, something grungy – where everyone is wearing black. That’s my vibe; don’t go out until 11 when all the other vampires come out and go home when the sun comes up at 7. Oh shit. Creatures of the night.
Greg Puciato, Killer Be Killed & Dillinger Escape Plan
Right now it’s a room with no lights on. An unmade bed. A laptop with 9% battery and a mosquito that just refuses to die.
Dave Larkin, Dallas Crane
I love being on a little boat near home in South West Victoria with a fishing line in the water, the Sun coming up or going down. I also love walking the streets of Melbourne or Manhattan or many of the beautiful towns and villages of Ireland or anywhere. My partner and my family are central to it all. I also love being in the midst of a great music session, anywhere, anytime, being transported into the soul of the Universe.
Shane Howard
Fuck the Fucking Scene question! xo
Fuck The Fitzroy Doom Scene
Deep 70s disco, wonky synths, shady lyrics, fairy lights and cheap wine.