A year after it was originally scheduled, Victorian Opera is finally set to present the Australian premiere of five-time Tony Award-winning musical The Who’s Tommy.

Based on The Who’s legendary 1969 concept album Tommy, which sold over 20 million copies, the rock musical is set to supercharge Melbourne’s Palais Theatre from 13 – 21 August.

As Captain Walker, musical theatre icon Matt Hetherington (Dirty Rotten Scoundrels, Gypsy) joins the cast and returns to the Australian stage after several years in the United States. Hetherington stars alongside leading lady Amy Lehpamer (School of Rock, The Sound of Music) as Mrs. Walker. The duo makes their Victorian Opera debut in the production.

Hamilton Binnie Garcia and Sebastian Sero share the role of four-year-old Tommy, while Elijah Slavinskis and Will Wiseman alternate as ten-year-old Tommy.

With music and lyrics by The Who’s guitarist and vocalist Pete Townshend, the electrifying and timeless score features smash hits such as ‘Pinball Wizard’, ‘I’m Free’ and ‘Acid Queen’.

Tommy’s traumatic childhood leaves his senses paralysed, but despite being deaf, dumb and blind, the teenager plays a mean pinball game. His extraordinary talent catapults him to international superstardom in this inspiring story of hope, healing, and triumph over adversity.

Tickets are on sale from now and start at $39. Bookings available via victorianopera.com.au. 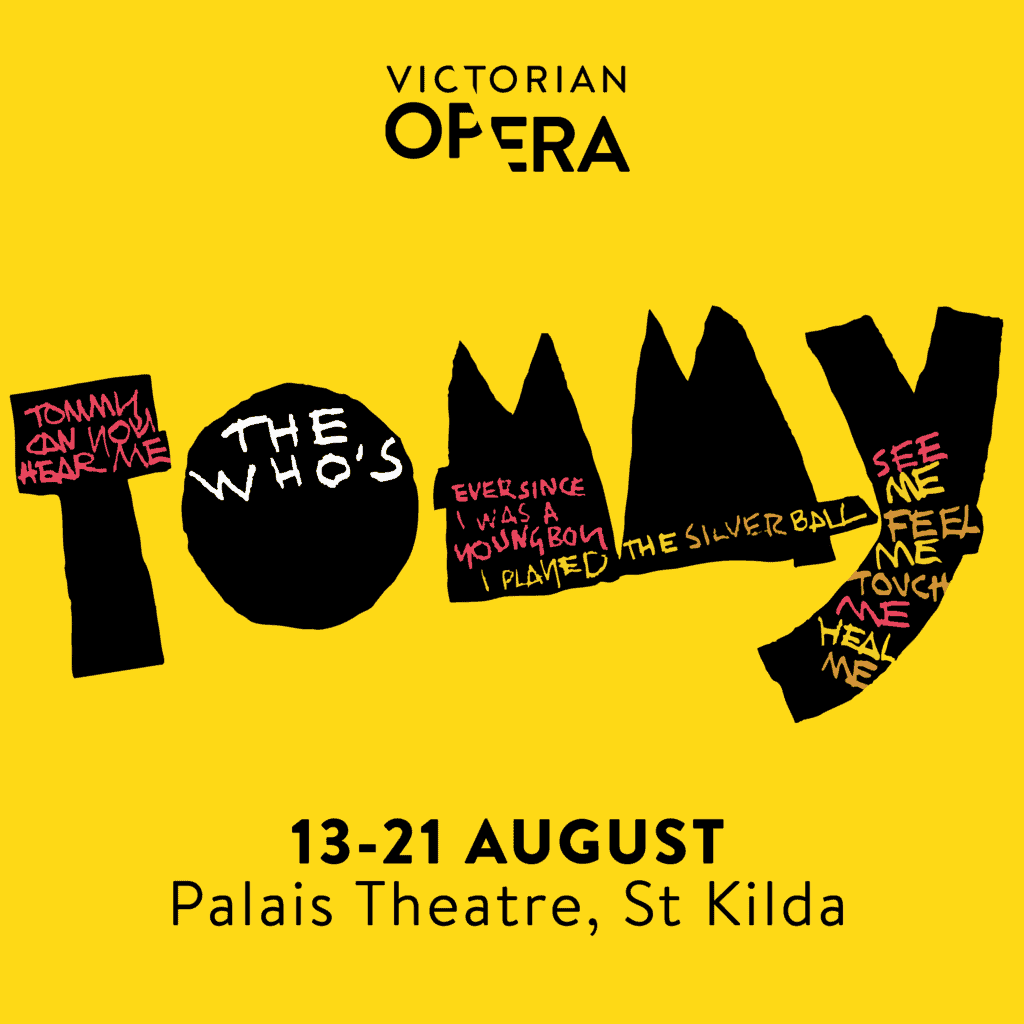 Running time is approximately 2 hours and 30 minutes, plus one interval
Suitable for mature audiences, ages 15+

Tell us a little bit about appearing on the original “GO!! SHOW”. I never appeared on The Go Show as I was still in Adelaide. Uptight in Oct ’68 was my 1st TV appearance . […]

Act III, Scene VI of King Lear. A tense and gripping scene wherein the ageing king informs his three daughters that they have all been accepted as contestants on Family Feud.
Ben Pobjie, comedian
Ep. 1 Series 3 of BBC’s ’Sherlock’ where Sherlock bungee jumps through a window and kisses Molly Hooper.
Miss Adelaide Everheart from Early Burley Burlesque

Tunes, mates, and honesty. No dickhead policy!
Buddha In A Chocolate Box
When I’m not working in the studio or doing shows I’m at home with my partner and our baby so I guess they are my scene.
Way of the Eagle
Yass KFC
Simon, Loon Lake

I love being on a little boat near home in South West Victoria with a fishing line in the water, the Sun coming up or going down. I also love walking the streets of Melbourne or Manhattan or many of the beautiful towns and villages of Ireland or anywhere. My partner and my family are central to it all. I also love being in the midst of a great music session, anywhere, anytime, being transported into the soul of the Universe.
Shane Howard
My scene is driving fast cars and shooting guns.
Ace Frehley
The car wash scene from Cool Hand Luke will do just fine thank you.
Old Gray Mule
Aside from music and everything creative, I love open-mind people, unexpected humour, seeing the world and nature, riding my bicycle, playing billiards. I’m also a fan of coffee, whiskey and most things vintage.
Jessica Stuart Few

I’m in with the Out-Crowd
Dave Warner
If you’re a Max Chillington then you’re our scene.
Gunslingers