Known as Antwerp’s loudest band, Triggerfinger have a predilection for dark, enigmatic, left-of-centre rock.  Think QOTSA meets The Black Keys with a dash of Led Zep and copious amounts of style and swagger.  Dished up with a fiery vengeance and lashings of their own particular brand of special sauce, the band’s new album COLOSSUS is due out August 25.  And we think you’ll like it.

FLESH TIGHT sounds like a catwalk strut across Sunset Boulevard driven by pulsating guitars. Vocalist/guitarist Ruben Block about the song: “The basic ingredients for Flesh Tight were written pretty quickly. More or less one flow, connecting the driving guitar-strum and struttin’ beat with the “flesh-tight-feelings” image. They stuck to each other. I preferred Flesh tight opposed to skin tight because it sounded more.. fleshy… There’s something uplifting, yet private and personal in the words.”

The accompanying music video is quite associative, according to Block: “For the video we were very happy we could work with Pieter Van Hees and his team, a  very cool Belgian movie and television director who, in his field always practiced an out of the ordinary, very personal approach. He created his own spin on what the lyrics and music brought him. And that’s just the start. Everyone should feel free to connect whatever images they want to it. Maybe the most important journeys are the ones we make in our minds.”

The Antwerp, Belgium based trio (Ruben Block, vocals & guitar; Paul Van Bruystegem, bass; Mario Goossens, drums) have built a solid reputation across Europe, the US and Canada as one of the hardest-driving and sharpest dressing bands around. With their self-titled debut album (2004), What Grabs Ya (2008), All This Dancing Around (2010) and By Absence of the Sun (2014) they’ve become a mainstay on the rock scene (the last two going platinum and gold, respectively).

Their impromptu cover of the Lykke Li song I Follow Rivers became a major hit across Europe in 2012, and they were invited to open for The Rolling Stones in 2013 and 2014. 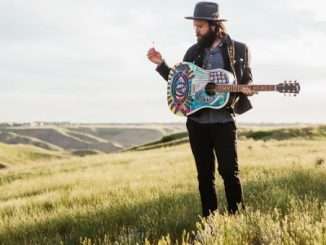