Since its debut six months ago ‘The Night Sky Is A Jewellery Store Window’ has produced a gracious amount of beautifully organic videos of performances by some of Melbourne’s finest singer-songwriters.

To celebrate this tiny milestone TNSIAJSW putting on a huge end-of-year show featuring a mind blowing line up of 20 local artists who, collectively, will perform over two hours of music on the one guitar which appears in the ‘Night Sky’ videos.
Held at the Yarra Hotel, Abbotsford on the November 13th, TNSIAJSW will also record the entire night for a future release.

Read our interview with Damon Smith. 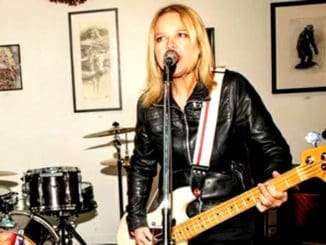 Q&A Scene: A HITCH TO THE STICKS Special: Maryanne Window

Flanelette pyjama pants.
Timberwolf
Quirky cabaret bars that serve a mean G&T and boast a stellar cocktail list..which is why you’ll always find me returning to The Butterfly Club! I also love the buzz of a Fringe or Cabaret Festival, or a smart Opening Night. Any excuse for a dress up, really!
Amelia Ryan, Lady Liberty

Cool small bars with good food, good wine, good company
The Backsliders
I just do my best to live a life full of the things I love. Rock’n’roll, photography, New York City – they are three things right there that I love a lot!
Paul Miles

Currently its the Yarra River Trail I’m walking along. Generally my scene would be Melbourne. Nothing feels or compares to home.
Simon McConnell, The Delta Riggs
World/folk. Acoustic and proud of it!
Ilana Cravitz, The London Klezmer Quartet

I love being on a little boat near home in South West Victoria with a fishing line in the water, the Sun coming up or going down. I also love walking the streets of Melbourne or Manhattan or many of the beautiful towns and villages of Ireland or anywhere. My partner and my family are central to it all. I also love being in the midst of a great music session, anywhere, anytime, being transported into the soul of the Universe.
Shane Howard
Bed. Pringles. Whisky. Attenborough doco. Wham.
Marlon Williams

Act III, Scene VI of King Lear. A tense and gripping scene wherein the ageing king informs his three daughters that they have all been accepted as contestants on Family Feud.
Ben Pobjie, comedian
It’s Thonbury. It’s my dreaming. I’ve lived here 30 years and it’s evolved with me. The more I drink wine, the more wine bars appear in the neighbourhood. The more I eat, the more cafes appear in the neighbourhood. Fantastic.
Denise Scott, Comedian

When I’m not working in the studio or doing shows I’m at home with my partner and our baby so I guess they are my scene.
Way of the Eagle
Going to the river on sunny afternoons with the blow up dingys and resting your beers on lily pads.
The Frowning Clouds
Anywhere there is good company, great conversation, and a glass of red.
Helen Perris

Well I’m still looking for my scene, and I think I might have found it. Between the pages of What’s My Scene Magazine.
Dave Faulkner, Hoodoo Gurus
My scene is Brunswick. I love it. It provides me with just about everything I need.
About Charlie Marshall

I like to think that I belong to the head-strong Independent Music Scene – where we – musos and audience and everyone in between – all make gigs/tours, recordings, releases happen for ourselves and work our arses off to keep it going for the rest of our lives – all for the love of Music!
Florelie Escano
Beer, riffs, good people, good food and new adventures, anywhere those things exist, that’s my scene!
Andy, Don Fernando