POST-PUNK ROYALTY THE THE TO PERFORM AT MELBOURNE FESTIVAL

Melbourne International Arts Festival today announced post-punk royalty, The The will return to Melbourne for the first time in almost thirty years to perform in this year’s event.

Following sold out performances in London in June, singer and songwriter Matt Johnson and his band The The are back performing songs from his longstanding repertoire that haven’t been heard or witnessed live in almost 20 years as well as new music.

A radical figure during Thatcher’s reign, Matt Johnson and The The were among the most critically-acclaimed and politically engaged bands of the 1980s, becoming post-punk icons of their generation alongside The Smiths and New Order. Ground-breaking albums such as Soul Mining (1989) and Infected (1986) have been considered among the decade’s finest releases. The The was Matt Johnson’s vehicle with a revolving cast of pop identities and cult figures including Johnny Marr of The Smith’s, Jools Holland, and Melbourne’s own JG Thirwell.

Melbourne Festival Artistic Director Jonathan Holloway said: ‘As a massive fan of post-punk music as a teenager in the eighties in England, it’s a no-brainer when you hear The The are planning to tour after nearly 30 years, it takes a second to say “yes” to bringing this special event to Melbourne.’ 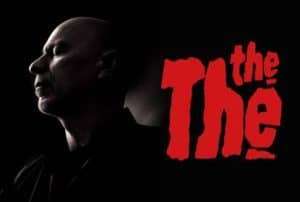 Matt Johnson began his career in 1979 writing personal songs of turmoil before he shifted his gaze to global geopolitics. This must-see event will feature The The’s renowned songs with lyrics heavily drenched in death, love, sex and the meaning of it all, such as 1982’s halting Uncertain Smile capturing teen angst, 1989’s The Beat(en) Generation which wraps a political message around Johnson’s famed gravely tones, and the textured sounds of Armageddon Days Are Here (Again) from 1989’s Mind Bomb, before taking a deep dive into the adored music and lyrics of Soul Mining.

‘I wanted to strip down many of the songs and actually reduce the sonic palette. We won’t be using any samplers, click-tracks, sequencers or synthesisers. It’s just five musicians, performing reinterpretations of my back catalogue. The songs are not intended to be reproduction of the album versions, and many of them don’t sound like they do on the old recordings. Some of the songs do, but if people really want to hear the albums, they should just put on headphones and listen to the albums.’ – Matt Johnson on The The 2018 tour.

‘This is weighty art-school friendly post punk… Matt Johnson’s voice was as resonant as ever, while the music jumped from clattering jazz to scuzzy punk to jittery funk with conviction.’ – The London Times

About Mary Boukouvalas 1250 Articles
Mary is a photographer and a writer, specialising in music. She runs Rocklust.com where she endeavours to capture the passion of music in her photos whether it's live music photography, promotional band photos or portraits. She has photographed The Rolling Stones, KISS, Iggy Pop, AC/DC, Patti Smith, Joe Strummer, PULP, The Cult, The Damned, The Cure, Ian Brown, Interpol, MUDHONEY, The MELVINS, The Living End, Foo Fighters, Smashing Pumpkins, Rage Against The Machine, The Stone Roses –just to name a few - in Australia, USA, Europe and the Middle East. Her work has been published in Beat magazine, Rolling Stone magazine, Triple J magazine, The Age Newspaper, The Herald Sun, The Australian, Neos Kosmos, blistering.com, theaureview.com, noise11.com, music-news.com. She has a permanent photographic exhibition at The Corner Hotel in Richmond, Victoria Australia.
Website Facebook Twitter YouTube

Scene News: Due to popular demand, THE THE announce second Melbourne show

Post-punk royalty, The The will return to Melbourne for the first time in almost thirty years to perform in this year’s event. Following sold out performances in London in June, singer and songwriter Matt Johnson […]

Review Scene: Based on an extraordinary true story ‘Come From Away’ is not your typical musical

Following on from successful seasons in New York, London and Toronto, Melbourne is currently hosting the Australian premiere of Come From Away. This ground-breaking musical is based on the incredible real-life events in the wake […]

Ryuichi Sakamoto claims that Kukangendai are his favourite Japanese band of the times – so much so, that the renowned musician and composer collaborated with the three-piece Kyoto-based band on an album. Kukangendai make their […]

I have no idea what my scene is; I have been listening to Dubstep and a bit of Drum N Bass. I found a lot of Hip Hop and RnB stuff is getting very interesting again it is pushing different sounds out. I’ve been really into cycling since the early ‘90s; racing mountain bikes and racing road bikes. So between cycling and music there is not much time left, a bit of sleep now and again.
Mike Edwards, Jesus Jones
Hiking a 14K foot mountain in Colorado
Cole Washburn
Country roots, old time, bluegrass, folk, Americana scene Traditional plus :)
Whitetop Mountaineers
I will continue the continuum, singing my Songline.
Kutcha Edwards
Anyone who welcomes a hairy, gold wearing, hot air blowing idiot to a dinner table is my scene.
Henry Wagons
It’s a delirium, really, but I like to live like this.
Hugo Race
Cool small bars with good food, good wine, good company
The Backsliders
I am a simple man. My scene is simple. I like playing metal and spending time with my family.
Waclaw ”Vogg” Kieltyka, Decapitated
Tunes, mates, and honesty. No dickhead policy!
Buddha In A Chocolate Box
Currently, I’m completely enveloped by writing my book; trying to complete the manuscript for my tome.
Jeff Duff
Quirky cabaret bars that serve a mean G&T and boast a stellar cocktail list..which is why you’ll always find me returning to The Butterfly Club! I also love the buzz of a Fringe or Cabaret Festival, or a smart Opening Night. Any excuse for a dress up, really!
Amelia Ryan, Lady Liberty
My scene is a Punk-hardcore scene or an underground, minimal electronic scene, something grungy – where everyone is wearing black. That’s my vibe; don’t go out until 11 when all the other vampires come out and go home when the sun comes up at 7. Oh shit. Creatures of the night.
Greg Puciato, Killer Be Killed & Dillinger Escape Plan
“Malcolm Hill is a lifetime member of the Melbourne Music Mafia and part of the ratpack of post punk Melbourne artists who have been keepin’ it real across diverse art forms for thirty years.”
Malcolm Hill
Alice likes the Google. Sime likes taxidermy. It’s a pretty happening scene.
Sweet Jean
Staying home out of harms way.
Peter Milley, Cairo Club Orchestra
Right now it’s a room with no lights on. An unmade bed. A laptop with 9% battery and a mosquito that just refuses to die.
Dave Larkin, Dallas Crane
No set scene. We have played with a variety of bands from King Parrot to The Datsuns. Offer us a show and give us a try!
Los Hombres Del Diablo
All the wandering. The bastards and the angels. The sound of the rain and the pains of the heart. The silence. All the houses and all the rooms. All the keys and phones.
Raised By Eagles
Bed. Pringles. Whisky. Attenborough doco. Wham.
Marlon Williams
Going to the river on sunny afternoons with the blow up dingys and resting your beers on lily pads.
The Frowning Clouds
We can be dirty, we can be imperfect, we can be classy, it doesn’t matter. We drift between scenes and eventually may just create our own.
The Ugly Kings
I think my style is more just making cameos in everyone else’s scene.
Mojo Juju
Our scene is folk that are interested in change. Not just music, but breaking the norm, the boundaries and stereotype of Australian ’rock/pop’ music. Unpredictable, the question marks, the new jokers in town. Don’t Believe The Haze.
Slumberhaze
Yass KFC
Simon, Loon Lake
World/folk. Acoustic and proud of it!
Ilana Cravitz, The London Klezmer Quartet
Currently its the Yarra River Trail I’m walking along. Generally my scene would be Melbourne. Nothing feels or compares to home.
Simon McConnell, The Delta Riggs
That’s a hard one, although I do love anything electronic with an indie-pop feel!
Franki
Our scene is this big gorgeous wide world we live in all its majestic splendour!
Kim Salmon, The Darling Downs
Aside from music and everything creative, I love open-mind people, unexpected humour, seeing the world and nature, riding my bicycle, playing billiards. I’m also a fan of coffee, whiskey and most things vintage.
Jessica Stuart Few
The Astor Theatre on chapel st. Old cinema with copious amounts of atmosphere playing classic films (Chaplin, Gene Kelly, Kubrick, etc) and me with a honeycomb choc top spilt on my Tshirt because that’s just how I roll.
Jude Perl, Comedian
Sitting in the sun, in a nice chair, with a good book.
James Reyne
I don’t wish to belong to any scene that would have me as a member (with thanks to Groucho Marx).
Bob Spencer, Raw Brit
Comedy, surreal show girls, burlesque and theatre
MC KREWD
Obviously to create music. My family. I love driving my Ferraris.
Yngwie Malmsteen
My scene is Brunswick. I love it. It provides me with just about everything I need.
About Charlie Marshall
My scene is at the moment Big Wongs General Tsos Chicken as I get sauce on the keys typing to you :-)
Brian Mackey
Beer, riffs, good people, good food and new adventures, anywhere those things exist, that’s my scene!
Andy, Don Fernando
Deep 70s disco, wonky synths, shady lyrics, fairy lights and cheap wine.