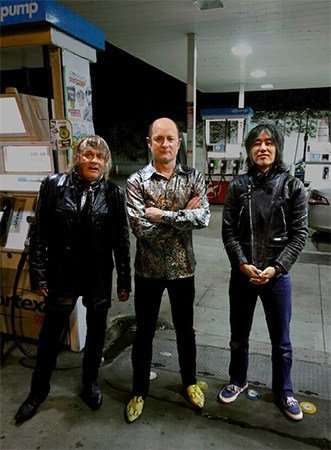 Leaps and Bounds Music Festival proudly presents these legends playing The Victims songs (which they wrote back in 1978) reincarnated in 2015 as The Television Addicts. See them live at the Tote on Friday 17th July with special guests Fire Escape Goats, Hits and Power.
BACKGROUND on THE TELEVISION ADDICTS:
On August 9, 2014 legendary Perth punk band The Victims were temporarily reincarnated in the guise of The Television Addicts, playing a one-off gig at The Rosemount Hotel in North Perth. Founding Victims members James Baker and Dave (“Flick”) Faulkner were joined on stage by lifelong Victims fan Ray Ahn and the trio proceeded to belt out a set of classic Victims tunes, most of which had not been heard since the band broke up in mid-1978. The trio has since played a couple more shows.

BACKGROUND on THE VICTIMS:

The Victims was a punk band from Perth, Western Australia, active in 1977-79. The band’s members were Dave Flick (Dave Faulkner) on guitar and vocals, James Baker (drums) and Rudolph V (Dave Cardwell) on bass. Baker and Cardwell had both been members of The Geeks and when that group folded they formed The Victims with Faulkner, who then referred to himself as Dave Flick. In 1977, The Victims released their debut single, “Television Addicts” of which only 1,000 copies were pressed. The following year they released a five track EP entitled simply The Victims (also known as No Thanks to the Human Turd).

Tickets on sale now from Oztix

Scene news: The Shrine confirm for CherryRock015 in AC/DC Lane

The final four acts have been confirmed for CherryRock015 and they are The Shrine from Los Angeles, California, Warped from Geelong, Clowns and The Ugly Kings. It’s an “all-killer, no-filler” line-up of solid rock. Let […]

Brian Nankervis and members of the RocKwiz Orkestra present Dr. John’s Gris-Gris album & New Orleans 60s Classics Live! Mandy Hall talked to Brian about the origins of the show. I chatted to Brian on […]

Scene News: The Dubrovniks are back for one night only – Leaps & Bounds Music Festival 2015

Saturday 18th July at the Corner with the Scientists (original line up) After a 22 year hiatus the Dubrovniks are temporarily back together will be playing live in Melbourne on Saturday 18th July. I’m Flipped […]

Going to the river on sunny afternoons with the blow up dingys and resting your beers on lily pads.
The Frowning Clouds
Hot, hot lovers
Luke Monks, Gay Paris

I love being on a little boat near home in South West Victoria with a fishing line in the water, the Sun coming up or going down. I also love walking the streets of Melbourne or Manhattan or many of the beautiful towns and villages of Ireland or anywhere. My partner and my family are central to it all. I also love being in the midst of a great music session, anywhere, anytime, being transported into the soul of the Universe.
Shane Howard
Quirky cabaret bars that serve a mean G&T and boast a stellar cocktail list..which is why you’ll always find me returning to The Butterfly Club! I also love the buzz of a Fringe or Cabaret Festival, or a smart Opening Night. Any excuse for a dress up, really!
Amelia Ryan, Lady Liberty

When I’m not working in the studio or doing shows I’m at home with my partner and our baby so I guess they are my scene.
Way of the Eagle
Deep 70s disco, wonky synths, shady lyrics, fairy lights and cheap wine.

I like to think that I belong to the head-strong Independent Music Scene – where we – musos and audience and everyone in between – all make gigs/tours, recordings, releases happen for ourselves and work our arses off to keep it going for the rest of our lives – all for the love of Music!
Florelie Escano
My family, my friends, my home.
Cory Putman, Norma Jean

Right now it’s a room with no lights on. An unmade bed. A laptop with 9% battery and a mosquito that just refuses to die.
Dave Larkin, Dallas Crane
Obviously to create music. My family. I love driving my Ferraris.
Yngwie Malmsteen