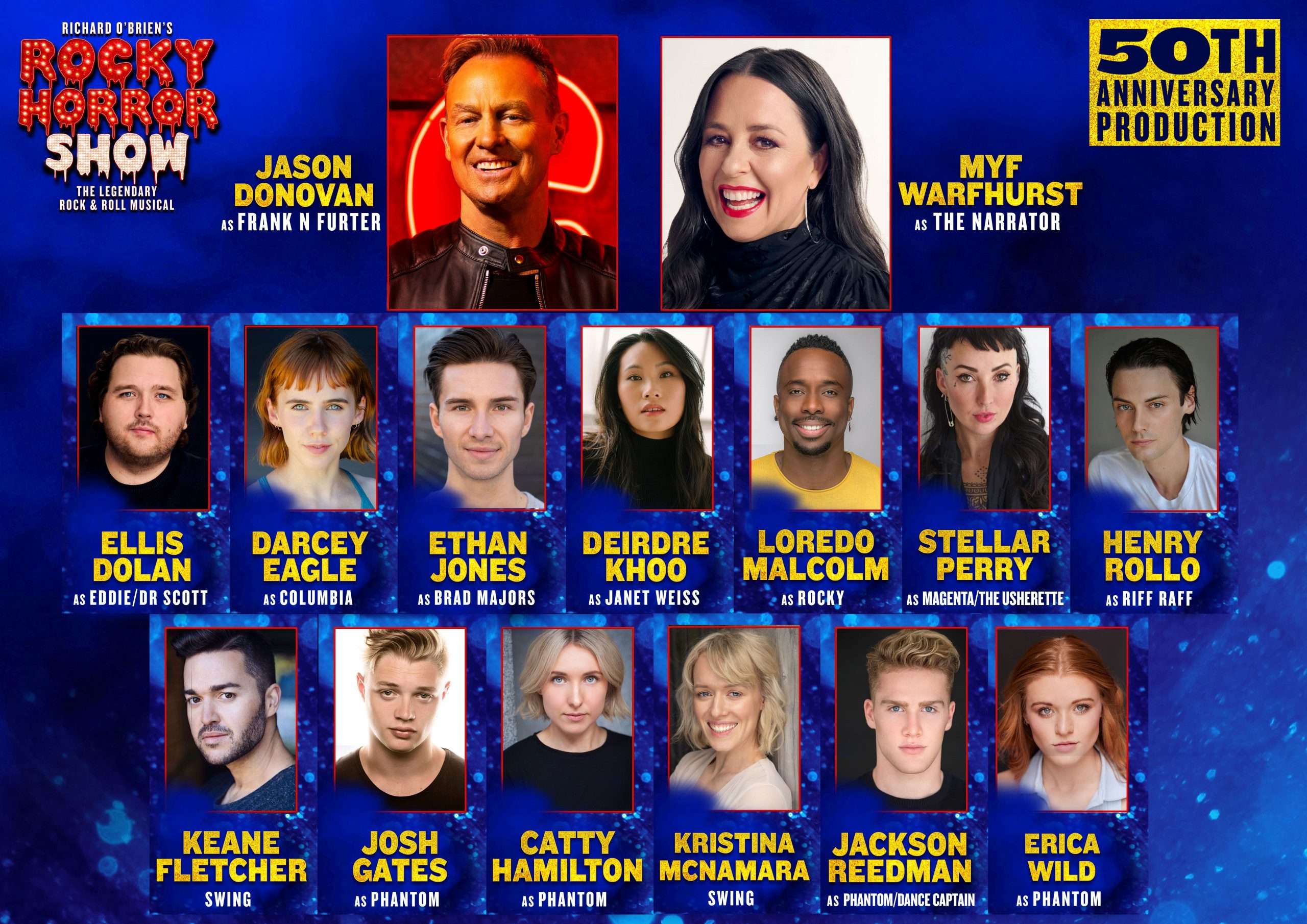 MELBOURNE ATHENEUM THEATRE FROM MAY 18

“Still the sexiest and funniest show in town”

The 50th Anniversary production of iconic Rock ‘N’ Roll musical The Rocky Horror Show has confirmed the final cast members for its Australian Tour which kicks off global celebrations at Theatre Royal Sydney on February 14 before seasons at Adelaide Festival Theatre from April 13 and Melbourne’s Atheneum Theatre from May 18.  Full casting for the Adelaide season will be confirmed soon.

Tickets on sale now at rockyhorror.com.au

Joining the cast as Magenta alongside Australian superstars Jason Donovan as Frank N Furter, and Myf Warhurst as The Narrator, will be Stellar Perry (X Factor, The Voice, Bell Shakespeare’s The Lovers). As previously announced, further principal cast will be Ellis Dolan as Eddie/Dr Scott, Darcey Eagle as Columbia, Ethan Jones as Brad, Deirdre Khoo as Janet, Loredo Malcolm as Rocky and Henry Rollo as Riff Raff.

Starring alongside them on stage as The Phantoms will be Josh Gates, Catty Hamilton, Jackson Reedman and Erica Wild, Keane Fletcher and Kristina McNamara round out the cast as the Swings.

Written and created by Richard O’Brien, The Rocky Horror Show has become one of the world’s favourite musicals and is currently the only contemporary rock musical to celebrate 50 years on stage. Since it first opened in London in 1973 at the Royal Court’s Theatre Upstairs, The Rocky Horror Show has been continuously on stage somewhere in the world and has paved its way into history as one of the classics of musical theatre.

The Rocky Horror Show first began life in 1973 before an audience of just 63 people in the Royal Court’s Theatre Upstairs. It was an immediate success and transferred to the Chelsea Classic Cinema, before going on to run at the Kings Road Theatre, 1973-79 and the Comedy Theatre in the West End, 1979-80. In 1975 it was transformed into a film called ‘The Rocky Horror Picture Show’. This film adaptation took over $135 million at the Box Office and is still shown in cinemas around the world nearly 50 years after its premiere, making it the longest running theatrical release in cinema history. Many stars of the stage and screen including Russell Crowe, Tim Curry, Susan Sarandon, Meat Loaf, Jerry Springer, Adam Lambert, Emma Bunton, Stephen Fry, Reg Livermore, Bert Newton, Gretel Killeen, Derryn Hinch, and Shane Jacobsen have appeared in The Rocky Horror Show over the past 50 years. This iconic brand holds a unique place in theatre history, a show which has defied the decades and continued to grow in popularity.

Seen by over 30 million people in more than 30 countries and translated into 20 languages, The Rocky Horror Show audiences have embraced the unique and mischievous musical with fandom and passion, celebrating the gratification of the senses. The hit music, the characters, the freedom and sexual awakening and empowerment means so much to so many across all walks of life. Featuring one of the most famous musical numbers of all time the party floor-filler, “The Time-Warp” which remains a key to its continued success over the past 50 years.

The Rocky Horror Show has just completed its most successful UK tour and is one of the top performing musicals in the post pandemic era. It has also recently toured in Israel, Germany, Switzerland, Austria, Italy, Argentina, Romania, Slovenia, Belgium, Tokyo, Korea, Brazil, Canada and Iceland.

The Rocky Horror Show tells the story of Brad and his fiancée Janet, two squeaky clean college kids who meet Dr Frank’n’Furter an extra-terrestrial mad scientist from the galaxy of Transylvania where people really like to party! It’s an adventure they’ll never forget, with fun, frolics, frocks and frivolity, bursting with timeless songs and outrageous outfits.

In 2023 the Global Guaranteed Party will be in Australia!

“Still the sexiest and funniest show in town” – Evening Standard

“Hard to think of another musical quite as unique as this. Christopher Luscombe’s affectionate production feels like a genuine blast from the past” – Mail on Sunday

“As delightfully naughty as ever!” – Daily Telegraph UK

FULL CASTING FOR THE ADELAIDE SEASON WILL BE CONFIRMED SOON

MELBOURNE – ATHENEUM THEATRE FROM MAY 18

Scene News: THE PHANTOM OF THE OPERA AUSTRALIAN CAST ANNOUNCED

Escapism at its best – an enthralling new portrayal of this gothic love story.    The Phantom of the Opera famously ran in Melbourne for the first time in the early 90’s to astounding success.  […]

Tegan Voltaire, The Voltaire Twins
Our scene is in the city of Bath, a small city with a very big musical identity, we play the British festivals and I am also in the ’choirs scene’. We are also in other bands for fun, music all the way, roll on summer!
Su Hart, Baka Beyond
If you’re a Max Chillington then you’re our scene.
Gunslingers
I have no idea what my scene is; I have been listening to Dubstep and a bit of Drum N Bass. I found a lot of Hip Hop and RnB stuff is getting very interesting again it is pushing different sounds out. I’ve been really into cycling since the early ‘90s; racing mountain bikes and racing road bikes. So between cycling and music there is not much time left, a bit of sleep now and again.
Mike Edwards, Jesus Jones
Cool small bars with good food, good wine, good company
The Backsliders
“Malcolm Hill is a lifetime member of the Melbourne Music Mafia and part of the ratpack of post punk Melbourne artists who have been keepin’ it real across diverse art forms for thirty years.”
Malcolm Hill
Book clubs, philosophy and extreme black metal
Elsen Price
The beach. Tea with gin at your grandparents house. They have the best stories.
Betty & Oswald
Hiking a 14K foot mountain in Colorado
Cole Washburn
All of the above and more in my shed every Friday night
Hound
Alice likes the Google. Sime likes taxidermy. It’s a pretty happening scene.
Sweet Jean