Hailing from Britain, THE DOORS ALIVE are more than just a tribute act. Renowned and respected the world over, the band re-create the sound, look,presence and magic of THE DOORS concert experience. Fans of THE DOORS aretransported a nostalgic musical journey with all the Classic Hits – Light MyFire, Break on Through (to the Other Side), Riders On The Storm, People AreStrange, L.A. Woman, The End, Roadhouse Blues, Love Her Madly plus loadsmore

With the surreal ability to capture the iconic look, attitude and distinctbaritone voice of mystical figurehead Jim Morrison, the band showcases themusical chops of the original band members with ease and finesse. Taking theaudience on a nostalgic musical journey, THE DOORS ALIVE use the very sameinstruments that members of the original band played.

Earning five-star reviews as well as the highest praise Doug Cameron (TheDoors Assistant Road Manager 1968/69) “The best Doors tribute band that I’veseen.. Sometimes they sound more like The Doors than The Doors”. THE DOORSALIVE re-creating all your favourite classic DOORS using the very sameinstruments that members of the original band played leaving crowds theworld over awestruck by show. “a very metaphysical experience” was how a fandescribed it. 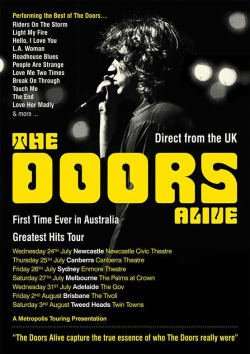 ”The Doors Alive is the closest thing you will get to being in the sameroom as the real thing. Close your eyes and you will be transported back tothe sounds that made the Doors one of the most iconic and reveredbands”(Academy Music Group)

Special music lasts forever and is not just a product of its time. Promisingto be a celebration of remarkable proportions, don’t miss THE DOORS ALIVE asthey re-capture the greatness of THE DOORS and bring their amazing songbookto life in Australia for the first time ever!

I like to think that I belong to the head-strong Independent Music Scene – where we – musos and audience and everyone in between – all make gigs/tours, recordings, releases happen for ourselves and work our arses off to keep it going for the rest of our lives – all for the love of Music!
Florelie Escano
Quirky cabaret bars that serve a mean G&T and boast a stellar cocktail list..which is why you’ll always find me returning to The Butterfly Club! I also love the buzz of a Fringe or Cabaret Festival, or a smart Opening Night. Any excuse for a dress up, really!
Amelia Ryan, Lady Liberty

Tunes, mates, and honesty. No dickhead policy!
Buddha In A Chocolate Box
My scene is Brunswick. I love it. It provides me with just about everything I need.
About Charlie Marshall

I’m in with the Out-Crowd
Dave Warner
No set scene. We have played with a variety of bands from King Parrot to The Datsuns. Offer us a show and give us a try!
Los Hombres Del Diablo

The car wash scene from Cool Hand Luke will do just fine thank you.
Old Gray Mule
I love being on a little boat near home in South West Victoria with a fishing line in the water, the Sun coming up or going down. I also love walking the streets of Melbourne or Manhattan or many of the beautiful towns and villages of Ireland or anywhere. My partner and my family are central to it all. I also love being in the midst of a great music session, anywhere, anytime, being transported into the soul of the Universe.
Shane Howard
Leadfinger is a very strange band, hard to define, but we are free.
Stew, Leadfinger
Well these days my scene tends to revolve around my computer and being nudged by my dog to take her out for a walk. And then having my wife shout at me for spending time on my computer. I’m loving it actually. I’m quite relishing that scene. I miss them both very much.
Peter Hook, Joy Division/New Order/The Light

Going to the river on sunny afternoons with the blow up dingys and resting your beers on lily pads.
The Frowning Clouds
Currently its the Yarra River Trail I’m walking along. Generally my scene would be Melbourne. Nothing feels or compares to home.
Simon McConnell, The Delta Riggs
My scene is a Punk-hardcore scene or an underground, minimal electronic scene, something grungy – where everyone is wearing black. That’s my vibe; don’t go out until 11 when all the other vampires come out and go home when the sun comes up at 7. Oh shit. Creatures of the night.
Greg Puciato, Killer Be Killed & Dillinger Escape Plan

Well I’m still looking for my scene, and I think I might have found it. Between the pages of What’s My Scene Magazine.
Dave Faulkner, Hoodoo Gurus
Our scene is this big gorgeous wide world we live in all its majestic splendour!
Kim Salmon, The Darling Downs

Flanelette pyjama pants.
Timberwolf
All of the above and more in my shed every Friday night
Hound