“Tanzer can sing and channels the mega singers of the ’60s – belters like Shirley Basseyand Kathy Kirby with a good measure of Eartha Kitt’s sultry allure thrown in for good measure.” ­ Daily Review

Musician/director/diva Tanzer has assembled Melbourne’s most fabulous queer performers and creatives to concoct the cinematic new music video for ‘Johnny’.

The video sweeps us back in time to an alternate universe 1960s, part John Waters’ Baltimore, part Lynchian dream sequence. Tanzer has devised a dance routine to profess her love to Johnny, the sexy and mysterious leader of a biker gang. She gathers her coolest girlfriends to perform the piece in front of an uptight church crowd, urging Johnny to ditch his bad boy façade and show the world the man behind the mask. 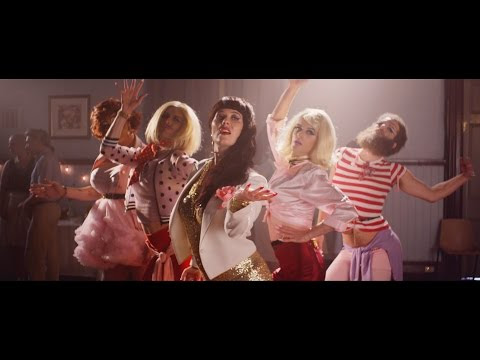 Written and directed by Tanzer, the video stars the dashing Zak Pidd (Sex on Toast) as Johnny, and drag/dance hot property Karen From Finance, Benjamin Hancock, James Andrews and Dandrogyny in the dual roles of the Girl Gang/Biker Boys. Featuring freaky fashion from local designers Alice Edgeley and The Huxleys and cameos from members of Sex On Toast and The Cactus Channel, ‘Johnny’ captures a cool cross-section of Melbourne’s alternative arts scene joining forces on a labour so loved-up you’ll feel sparkly too.

Onstage, Tanzer is a commanding chanteuse with a voice and enigma that literally silences a room. Propelled by a thunderous backing band, her cinematic live show has graced events as diverse as Falls Festival, Melbourne International Jazz Festival, and the Sydney Gay & Lesbian Mardi Gras, and was most recently heard soundtracking the promo for Dark Mofo.

Tanzer will launch her debut EP Four Love Songs by Tanzer on heart-shaped, scarlet glitter vinyl at The Toff in Town on Saturday May 28th, with Melbourne’s most magical stars of music, drag, and otherworldly performance assembled to celebrate. Two fabulous bands, FIVE acts blurring drag, dance and performance art, and DJs from Melbourne’s most outrageous funk ensemble? Better start planning your outfit. Tell us about your new single/ album/ tour? ‘Johnny’ is a Ronettes-inspired ode to a flashy entertainer whose off-stage persona stole my heart. It’s the single from my EP ‘Four Love Songs By Tanzer’, each […]

As the audience make their way to their seats, acclaimed London Based comedy duo, Jennifer Byrne and Vicky Falconer- Pritchard, clad in pink pinafores, are chatting to the crowd and encouraging them to sit at […]

Flanelette pyjama pants.
Timberwolf
All the wandering. The bastards and the angels. The sound of the rain and the pains of the heart. The silence. All the houses and all the rooms. All the keys and phones.
Raised By Eagles

Tunes, mates, and honesty. No dickhead policy!
Buddha In A Chocolate Box
Leadfinger is a very strange band, hard to define, but we are free.
Stew, Leadfinger
Ep. 1 Series 3 of BBC’s ’Sherlock’ where Sherlock bungee jumps through a window and kisses Molly Hooper.
Miss Adelaide Everheart from Early Burley Burlesque

Well I’m still looking for my scene, and I think I might have found it. Between the pages of What’s My Scene Magazine.
Dave Faulkner, Hoodoo Gurus
My scene is finding any excuse to dance with my 2 year old daughter Ruby.
Matthew Hardy, Comedian

I like to think that I belong to the head-strong Independent Music Scene – where we – musos and audience and everyone in between – all make gigs/tours, recordings, releases happen for ourselves and work our arses off to keep it going for the rest of our lives – all for the love of Music!
Florelie Escano
Staying home out of harms way.
Peter Milley, Cairo Club Orchestra

My scene is driving fast cars and shooting guns.
Ace Frehley
It’s a delirium, really, but I like to live like this.
Hugo Race

Cool small bars with good food, good wine, good company
The Backsliders
My scene is Brunswick. I love it. It provides me with just about everything I need.
About Charlie Marshall

The car wash scene from Cool Hand Luke will do just fine thank you.
Old Gray Mule
I love being on a little boat near home in South West Victoria with a fishing line in the water, the Sun coming up or going down. I also love walking the streets of Melbourne or Manhattan or many of the beautiful towns and villages of Ireland or anywhere. My partner and my family are central to it all. I also love being in the midst of a great music session, anywhere, anytime, being transported into the soul of the Universe.
Shane Howard
The dog park’s pretty good. I have a couple of miniature pinchers. And they’re the loves of my life. I take them for walks to the dog park; I’ve got a Harley Davidson I ride around. It’s not too exciting. It used to be sex, drugs and rock n roll; now I walk my dogs.
Stan Lee, The Dickies