There’s something very special about the enigmatic electronic duo Sumner, consisting of Jack McLaine and Chloe Wilson.  The underground newcomers have already played alongside Vera Blue, The Smith Street Band, Montaigne, graced the Falls Festival stage and are a part of the upcoming Party In The Paddock…but in 2018, it’s about to get a whole lot bigger with the release of their exciting new single, Pictures, on February 9.  This dark RnB track examines solitude, and is the first taste of Sumner’s upcoming debut EP, All That I Am (out Feb 16), a release that explores illness, diagnosis, personal struggle and catharsis, all within Sumner’s own very cool little world.

Pictures plays with a wide variety of elegant influences; the duo embrace the production style of Lorde’s first LP, while adding their own distorted pop/RnB stylings reminiscent of Frank Ocean and heavy bass that feels like something off an Arctic Monkeys record.  It’s a potent combination that particularly shines on this single, as the duo have skillfully pieced together some seriously eclectic moments to create this one intelligent, mature, hooky song.  Reflecting on the inspiration behind the track, Jack and Chloe agree it’s definitely about feeling very alone, “The song was inspired by the feeling of being alone in a packed club full of people.  Feeling distant and out of touch with the people around you laughing, dancing and having a generally happy time.”

The EP All That I Am is further proof that Sumner are one to watch.  This collection of songs is perfectly unique and completely self-assured, and not only is that very rare for such a young project – it’s precisely what makes them special.  All That I Am is effortlessly cool and refreshing, with open vulnerability within the lyrics that overflow atop consistant beds of glowing, pulsating, dexterous production.  Jack and Chloe share a little more about the process and the team behind it all, “The EP was entirely self-produced and recorded.  We worked with some mates for particular parts such as Shanice Osita Chuku on additional vocals in 45 Roses and Pictures, and Billy Bennett (Save The Clock Tower) on additional guitar for Lover.  We also worked with Ross Irwin (The Cat Empire, The Bamboos) for the horn parts on 45 Roses.  The EP was mixed by Kevin ‘KD’ Davis (Rihanna, TLC, Destiny’s Child, Tupac) and mastered by Grammy Award winner William Bowden (Gotye, Hermitude).”

Music is the constant thread shared between Jack and Chloe, as they reflect on the theme of the EP and what it was that brought them together, “We used music as a catharsis, with the EP following a story from illness to a cleaner, healthier mind with a change of perspective through the process… We met living in the small town of Launceston and finding each other’s music through mutual friends.  We decided to link up to play a one off gig as ‘Sumner’ and we haven’t stopped making music since.” 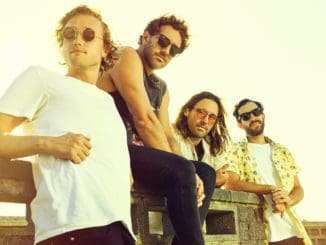