Supporting and mentoring composers who identify as women – growing the gender diversity of composers in music programs Australia-wide.

Inspired by Anne Summers’ ‘Women’s Manifesto’ released in 2017, which is intended as a blueprint for equality for women in Australia, Tura New Music, Monash University, Soundstream and Decibel New Music Ensemble have launched The Summers Night Project. The project has been established to support and mentor emerging composers who identify as women to create a composition for performances in Perth, Adelaide and Melbourne, with the aim of growing the gender diversity of composers in music programs Australia-wide. 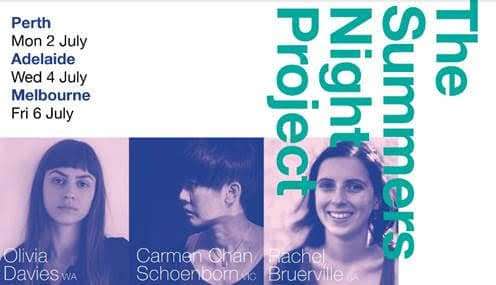 The three composers chosen from a national call-out are Olivia Davies (WA), Rachel Bruerville (SA) and Carmen Chan Schoenborn (VIC). They will compose works for a chamber ensemble comprised of members of Decibel New Music Ensemble and Soundstream. Each composer has been allocated a lead mentor from their home state and has access to all performer mentors each possessing different areas of expertise.
Mentor and initiator of the project, Professor Cat Hope, Head of the Sir Zelman Cowan School of Music at Monash University, has been planning the project for some time, and the project gained momentum after participating as a mentor in Soundstream’s Emerging Composers Forum in 2016.

“Artistic Director of Soundstream, Gabriella Smart and I decided that teaming up to support composers was a good idea, and that focusing on composers identifying as women – irrespective of their musical style, age or level of experience – was an important focus for a mentorship project at this time. I reached out to Anne Summers, whose work in support and recognition of women in Australia has been an enormous inspiration to me, with the name idea – and so with her approval, and Tura’s facilitation, the project is finally underway,” Professor Hope said.
A recent report published by Sydney University’s Business School in 2017, Skipping a Beat, identified that “[w]omen represent only one-fifth of songwriters and composers registered with the Australasian Performing Rights Association despite making up 45 percent of qualified musicians and half of those studying music.” This is backed up by data on radio programming, festivals line-ups and board member, senior and strategic roles in national music industry peak bodies where women are overwhelmingly under-represented.

Drawing from this report, Professor Hope states, “I believe that we need to support and nurture composers who are fighting to be visible. Recent statistics show us that on average, music created by women is programmed and performed less often than that by men, and that is why we have made this project to support composers who are not men in their endeavours as composers. Mentoring builds confidence in a unique way that I really believe adds something important to the development and presentation of new creative work.”
The composer mentors are Professor Cat Hope (VIC), from Monash University and artistic director of Decibel New Music Ensemble, Rebecca Erin Smith (WA), who recently mentored young composers from WAAPA to compose fanfares for the 2018 Perth Festival, and Becky Llewellyn (SA),instigator of the inaugural Composing Women’s Festival in Adelaide. Composers will have access to performance mentors Stuart James (WA) electronics, piano and percussion, Derek Pascoe (SA) saxophone, Tristen Parr (WA) cello, Gabriella Smart (SA) piano and Cat Hope (VIC) flutes.
Composers are given the choice to write for as many or as few of the following instruments as they desire; percussion, cello, ﬂute, saxophone, electronics and piano, and will take part in a two-day rehearsal intensive in Perth on 30 June and 1 July 2018.

This rehearsal period will be followed by concerts in the three host states; Monday 2 July at the Subiaco Arts Centre (WA), Wednesday 4 July at Elder Hall, University of Adelaide (SA), and Friday 6 July at the Music Auditorium, Sir Zelman Cowen School of Music, Monash University (VIC) as part of the Gender Diversity in Music Making Conference being held there.
The Summers Night Project is presented by Tura New Music, Soundstream and Monash University, in association with project partners APRA AMCOS, the Australian Music Centre, and Decibel New Music Ensemble.
WA Concert