A celebration of the unparalleled impact of cultural icon David Bowie.

This decidedly not-for-kids illustrated A–Z, celebrates the many faces and facets of David Bowie. From Aladdin Sane to Ziggy Stardust, Bowie A–Z is densely packed with everything you need to know about the rock legend – from the greatest hits of trivia to the most obscure B-side facts.

Bowie’s extraordinary cultural significance was highlighted by the worldwide outpouring of love following his tragic passing in January 2016. A huge influential source to many in the fields of music, art and fashion, David Bowie towers as a cultural figure of the twentieth (and into the twenty-first) century. Celebrate his enormous life in this fun, pop-cultural book.

Steve Wide is a DJ and writer. He has run some of the most enduring indie and retro club nights in Melbourne, and DJ’d for international acts including Primal Scream, Happy Mondays, The Shamen, Saint Etienne and Stone Roses as well as interviewing Jarvis Cocker and Noel Gallagher in front of festival crowds. He has interviewed countless UK music artists from John Lydon to Johnny Marr and comedians Bill Bailey, Noel Fielding and Russell Brand. He also has a fish called Ziggy Stardust. You can hear Steve every Friday at 2pm on Triple R FM for Far And Wide. 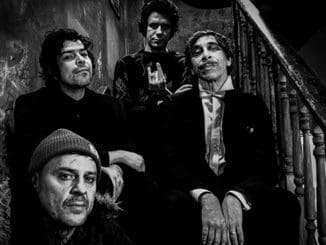 Well I’m still looking for my scene, and I think I might have found it. Between the pages of What’s My Scene Magazine.
Dave Faulkner, Hoodoo Gurus
Leadfinger is a very strange band, hard to define, but we are free.
Stew, Leadfinger
I don’t wish to belong to any scene that would have me as a member (with thanks to Groucho Marx).
Bob Spencer, Raw Brit

Going to the river on sunny afternoons with the blow up dingys and resting your beers on lily pads.
The Frowning Clouds
When I’m not working in the studio or doing shows I’m at home with my partner and our baby so I guess they are my scene.
Way of the Eagle
I have no idea what my scene is; I have been listening to Dubstep and a bit of Drum N Bass. I found a lot of Hip Hop and RnB stuff is getting very interesting again it is pushing different sounds out. I’ve been really into cycling since the early ‘90s; racing mountain bikes and racing road bikes. So between cycling and music there is not much time left, a bit of sleep now and again.
Mike Edwards, Jesus Jones

Tunes, mates, and honesty. No dickhead policy!
Buddha In A Chocolate Box
I will continue the continuum, singing my Songline.
Kutcha Edwards

I like to think that I belong to the head-strong Independent Music Scene – where we – musos and audience and everyone in between – all make gigs/tours, recordings, releases happen for ourselves and work our arses off to keep it going for the rest of our lives – all for the love of Music!
Florelie Escano
Any scene with Al Swearangen & Mr. Wu from the show Deadwood ;)
Mathas

Right now it’s a room with no lights on. An unmade bed. A laptop with 9% battery and a mosquito that just refuses to die.
Dave Larkin, Dallas Crane
I just do my best to live a life full of the things I love. Rock’n’roll, photography, New York City – they are three things right there that I love a lot!
Paul Miles

Cool small bars with good food, good wine, good company
The Backsliders
My scene is driving fast cars and shooting guns.
Ace Frehley
“Malcolm Hill is a lifetime member of the Melbourne Music Mafia and part of the ratpack of post punk Melbourne artists who have been keepin’ it real across diverse art forms for thirty years.”
Malcolm Hill

I’m in with the Out-Crowd
Dave Warner
We can be dirty, we can be imperfect, we can be classy, it doesn’t matter. We drift between scenes and eventually may just create our own.
The Ugly Kings

The car wash scene from Cool Hand Luke will do just fine thank you.
Old Gray Mule
Our scene is in the city of Bath, a small city with a very big musical identity, we play the British festivals and I am also in the ’choirs scene’. We are also in other bands for fun, music all the way, roll on summer!
Su Hart, Baka Beyond