The Australian music scene exploded into the 90s with a deluge of hot, hungry and sometimes heavy new acts! It was a decade to remember, there were more bands than ever, all jostling for attention in a crowded but ever-so-rich music landscape.

These acts cut their teeth playing to live audiences. Traversing our country’s major highways bringing their best work to eager young audiences in cities and towns across Australia. Then came the records, with many bands going one step further; crafting pieces of sonic art that once heard was never forgotten and recorded for posterity on many a Hottest 100!

Their shows were always packed to the rafters and the demand for their music heralded the dawn of the age of the festival…massive festivals sprouted all over the country – Big Day Out and Homebake became household names – as did the Australian bands that regularly appeared on their festival stages.

In honour of the what the 90s delivered to the soundtrack of our lives Empire Touring are proud to announce SPRING LOADED 2019! The inauguralSpring Loaded festival takes place on Saturday 22nd June at Sandstone Point Hotel, Bribie Island, Queensland, undoubtedly one of this country’s truly outstanding locations!

SPRING LOADED celebratesthe rad-ness of 90’s Australian rock music, it smells like teen spirit!!! Get your grunge on and get ready to rock the mosh pit with this stellar line-up of SPRING LOADED 2019!

Spiderbait, Something for Kate, Mark Seymour and the Undertow, Jebediah,Custard, Frenzal Rhomb, Tumbleweed and Screamfeeder!

SPIDERBAIT Janet, Whitt and Kram quickly consolidated their status as national treasures, their popularity spanning three decades and showing no signs of abating. They’ve released seven acclaimed albums, which have all racked up gold, platinum or double platinum status! Spiderbait have also racked up pretty much every accolade there is to achieve on the Australian scene, having taken home numerous ARIA Awards, chalked up a number one single (their 2004 cover of Leadbelly’s Black Betty) and even topped the prestigious triple j Hottest 100 (for Buy Me A Pony , 1996). Throughout their wondrous career they’ve been a fixture on all of Australia’s iconic festivals.

SOMETHING FOR KATE In the past decade they’ve sold over half a million records and released five top ten albums, their last 2012’s ‘Leave Your Soul To Science’ debuting at #1 on the ARIA charts. In 2014 they celebrated their 20th anniversary with a mammoth sold out tour, their first ever book, ’Paper Trail: 20 Years of Something for Kate’ and the accompanying short film, whilst also re-releasing their entire back catalogue on vinyl and CD. The band continue to make fiercely original and challenging records attracting what has been described as a cult- like following, while also gaining new and loyal listeners with each release. They are currently working on album #7.

JEBEDIAH It’s impossible for an Australian of a certain vintage to imagine late ’90s summers without those delirious early Jebs singles – ‘Jerks of Attention’, ‘Leaving Home’, ‘Teflon’, ‘Harpoon’, ‘Animal’ — blasting out of every car radio and festival PA from Summersault to the Falls to Homebake. Originating from Perth, Kevin Mitchell, Chris Daymond, Vanessa Thornton and Brett Mitchell had a stellar 2015 celebrating their twentieth anniversary with a double-album release and national sell-out tour.

MARK SEYMOUR has followed up his successful 18 years with Hunters & Collectors with a vibrant solo recording career. Mark’s songwriting ever evolves, he continually produces songs that resonate and permeate one’s consciousness. This evolution is due in part to the diversity of his activities, which include composition of film scores, writing and performing music for theatrical productions and acting. Internationally regarded as one of Australia’s best singer / songwriters, Mark along with his band the Undertow continues to draw audiences with his intense, passionate vocals delivered with a measure of wry humour.

CUSTARD Brisbane, 1990 is when they began. Custard released five albums in ten years and developed a cult following, playing countless shows around the country and touring overseas. Their parade of memorable singlesbecame entrenched in Australian pop music history. ‘Apartment’ polled higher than any other local artist in triple j’s Hottest 100 in 1995, with ‘Girls Like That (Don’t Go For Guys Like Us)’ coming in at #3 in the 1998 vote, before disbanding in 1999.  Reuniting in 2015 theyventured into the studio and released their first album in 16 years – Come Back all is Forgiven.

FRENZAL RHOMB Frenzal Rhomb is an Australian punk rock band that formed in 1992, with Jason Whalley on lead vocals and rhythm guitar during this entire period. In 1996, Lindsay McDougall joined the line-up on lead guitar and backing vocals.

TUMBLEWEED Tumbleweed is an Australian rock group formed in 1990 in Tarrawanna. Three of their studio albums appeared on the ARIA Albums Chart: Tumbleweed, Galactaphonic, and Return to Earth. Three releases reached the top 50 on the related ARIA Singles Chart: “Sundial”, “Gyroscope”,and “Hang Around”

SCREAMFEEDER A 3-piece noisy pop/indie rock band from Brisbane, Australia. Lovers of loud and beautiful music since the day they were each conceived, they have been compared to all the greats; Husker Du, The Jam, GBV and The Who. Contradictions and dualities abound within Screamfeeder, and therein lies their beauty.

Tickets for SPRING LOADED go on sale on Monday 4th March @ 9amand are expected to sell FAST so don’t miss out on your opportunity to see these Australian legends on stage at this awesomevenue! 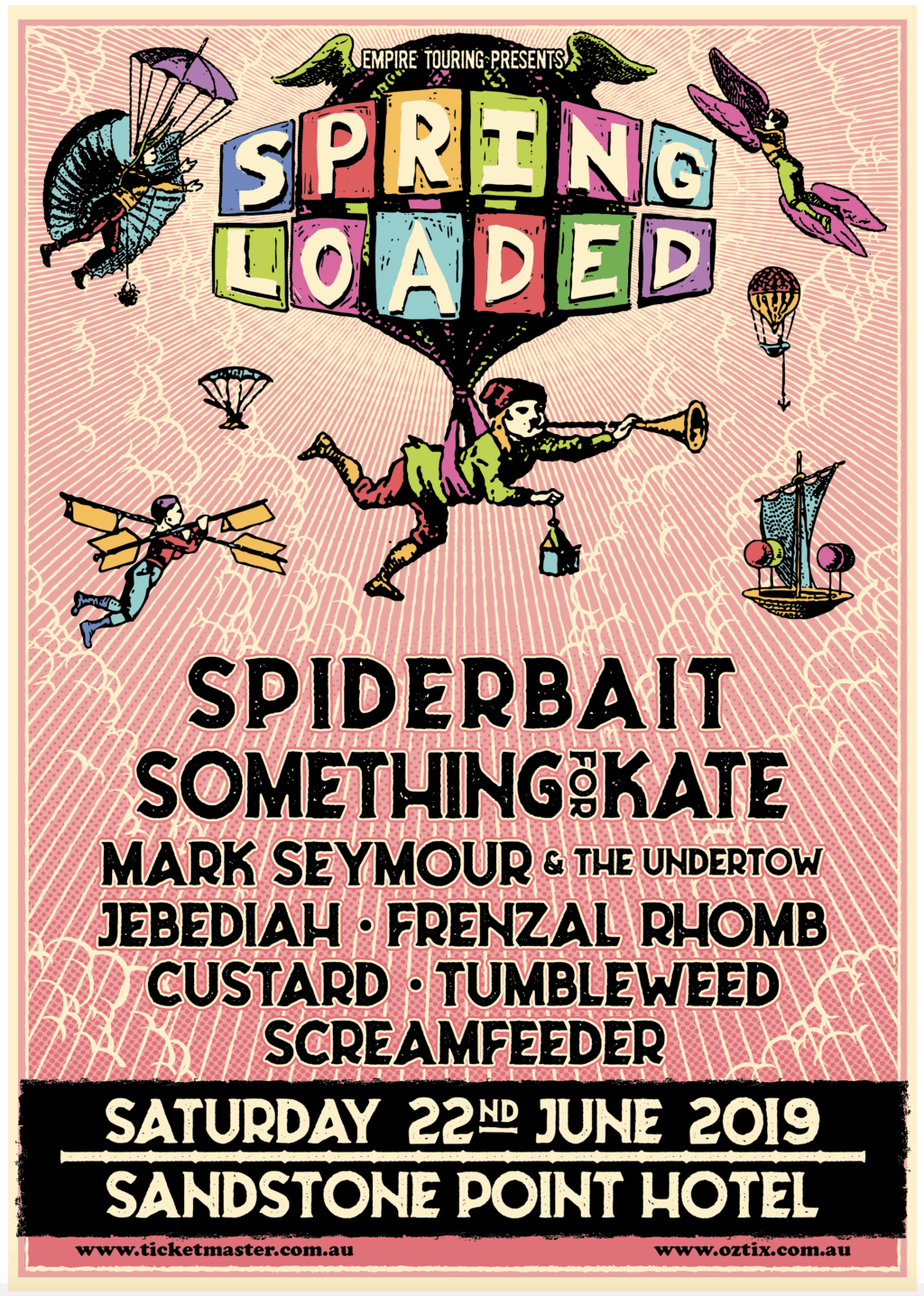 *Transaction fees, processing fees and other charges may apply.

Strictly no BYO food or alcohol

This is an outdoor concert, the show will go ahead rain, hail or shine

No tables, tents or sun shelters are permitted