How do you keep a band interesting after ten years? It’s a question Slow Club’s Charles Watson and Rebecca Taylor must have asked themselves as they started work on their fourth album. The answer seems to be producer Matthew E. White, the master of Southern-gothic folk, whose in house band at Richmond’s Spacebomb Studios provided the consistency and tone the album required. Almost every track was played live in the studio, allowing the long-established session band’s natural chemistry to augment Charles and Rebecca’s, with the double advantage of recording being very effective, and also comparatively quick.

Slow Club‘s One Day All Of This Won’t Matter Anymore is available now:  itunes.apple.com/OneDay 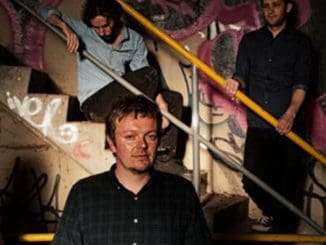 Act III, Scene VI of King Lear. A tense and gripping scene wherein the ageing king informs his three daughters that they have all been accepted as contestants on Family Feud.
Ben Pobjie, comedian
Our scene is folk that are interested in change. Not just music, but breaking the norm, the boundaries and stereotype of Australian ’rock/pop’ music. Unpredictable, the question marks, the new jokers in town. Don’t Believe The Haze.
Slumberhaze

Going to the river on sunny afternoons with the blow up dingys and resting your beers on lily pads.
The Frowning Clouds
I’m in with the Out-Crowd
Dave Warner
I love being on a little boat near home in South West Victoria with a fishing line in the water, the Sun coming up or going down. I also love walking the streets of Melbourne or Manhattan or many of the beautiful towns and villages of Ireland or anywhere. My partner and my family are central to it all. I also love being in the midst of a great music session, anywhere, anytime, being transported into the soul of the Universe.
Shane Howard
Leadfinger is a very strange band, hard to define, but we are free.
Stew, Leadfinger
Any scene with Al Swearangen & Mr. Wu from the show Deadwood ;)
Mathas

Currently its the Yarra River Trail I’m walking along. Generally my scene would be Melbourne. Nothing feels or compares to home.
Simon McConnell, The Delta Riggs
Scones, savory, sweet I don’t mind
The Wooden Sky

Tunes, mates, and honesty. No dickhead policy!
Buddha In A Chocolate Box
What’s my scene? well…
And another thing I’ve been wondering lately
Oh, baby,
Tell me where have you been?
Now the stage is set
Where’s my Juliet, baby?
Is it maybe
My Midsummer Night’s Dream?
What’s my scene?
Clowns

Cool small bars with good food, good wine, good company
The Backsliders
All of the above and more in my shed every Friday night
Hound