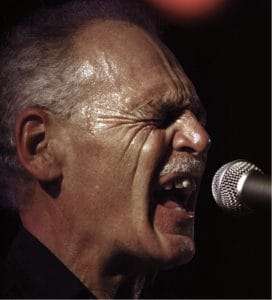 Dave Hole is an Australian Blues Rock slide guitarist who burst onto the international scene in 1991 with his first album, “Short Fuse Blues”, which was picked up by America’s most prestigious blues label, the Chicago based Alligator Records. He has since released a further eight albums; all of which have earned critical acclaim from such publications as ‘Billboard’, ‘Guitar Player’, ‘Guitar World’, ‘The Washington Post’, ‘Chicago Tribune’ and ‘Esquire’ magazine. His “Under The Spell” album won an Australian ARIA ward.

After innumerable world tours Dave’s explosive live show has earned him accolades from around the globe. He has headlined festivals in America, , Germany, Denmark, Holland, France, Switzerland, Norway, Brazil, Sweden, Russia, Austria, Italy, Spain, Belgium, Canada, Poland and The Czech Republic. Dave Hole has a world-wide fan base and is widely regarded as one of the all-time slide guitar greats. He will be touring Australia in May in support of his new album “Goin’ Back Down” which is out April 27. www.davehole.com

Tell us about your new single/ album/ tour? Our first single is titled “In Our Dreams”. It’s, in a way, about how our world today is in such a fragile state. Just from the perspective […]

Just how people respond to a band and its music depends a lot on the reason or reasons why that music is made. Sometimes songwriters have a point to prove, a moral to teach, anger […]

Tegan Voltaire, The Voltaire Twins
We can be dirty, we can be imperfect, we can be classy, it doesn’t matter. We drift between scenes and eventually may just create our own.
The Ugly Kings
Anyone who welcomes a hairy, gold wearing, hot air blowing idiot to a dinner table is my scene.
Henry Wagons
My bedroom
Nantes
I have no idea what my scene is; I have been listening to Dubstep and a bit of Drum N Bass. I found a lot of Hip Hop and RnB stuff is getting very interesting again it is pushing different sounds out. I’ve been really into cycling since the early ‘90s; racing mountain bikes and racing road bikes. So between cycling and music there is not much time left, a bit of sleep now and again.
Mike Edwards, Jesus Jones
What’s my scene? well…
And another thing I’ve been wondering lately
Oh, baby,
Tell me where have you been?
Now the stage is set
Where’s my Juliet, baby?
Is it maybe
My Midsummer Night’s Dream?
What’s my scene?
Clowns
I like to be out in the nature, to get away. Go to the woods. My dad lives in the woods. Maybe once or twice a year I don’t have phone reception there is no Wi-Fi
Fredrik Åkesson, Opeth
Our scene is this big gorgeous wide world we live in all its majestic splendour!
Kim Salmon, The Darling Downs
Flanelette pyjama pants.
Timberwolf
The dog park’s pretty good. I have a couple of miniature pinchers. And they’re the loves of my life. I take them for walks to the dog park; I’ve got a Harley Davidson I ride around. It’s not too exciting. It used to be sex, drugs and rock n roll; now I walk my dogs.
Stan Lee, The Dickies
Country roots, old time, bluegrass, folk, Americana scene Traditional plus :)
Whitetop Mountaineers
Cool small bars with good food, good wine, good company
The Backsliders
I like to think that I belong to the head-strong Independent Music Scene – where we – musos and audience and everyone in between – all make gigs/tours, recordings, releases happen for ourselves and work our arses off to keep it going for the rest of our lives – all for the love of Music!
Florelie Escano
Bed. Pringles. Whisky. Attenborough doco. Wham.
Marlon Williams