Slash and his band, Slash Ft. Myles Kennedy & The Conspirators have released the new video for Driving Rain—which features a live-action, animated adventure with ragdoll puppets–the first single off their new album Living The Dream.


Living The Dream is available now everywhere via Slash’s own label, Snakepit Records, in partnership with Sony Music Australia.

Slash describes creating the fun clip here: “The idea behind doing an animated video for ‘Driving Rain’ is mostly due to the dark subject matter of the song influencing directors to come up with very dramatic, dark and sullen regular live action treatments that weren’t any fun at all (no offense to those guys). So, I wanted to create something that could be tongue-in-cheek and yet still be dark with live-action animation. We’re all big fans of Stoopid Buddy and they came up with a great concept and treatment. We love the video and it came out fn’ brilliant. Fyi, no puppets were harmed during the making of this video.”

“Our whole team at Stoopid Buddy Stoodios was beyond excited to work with Slash, Myles, and those hard rocking Conspirators,” explains John Harvatine IV, Creative Director and Co-Founder. “We had a blast creating a dramatic heart-pounding music video with rag-doll-like rod puppets and adrenaline-filled RC Jeeps. From this moment forward, ‘Driving Rain’ is now the Citizen Kane of music videos!”

Slash Ft. Myles Kennedy & The Conspirators just launched their North American headlining tour and will visit 20 major cities before ending on the 16^th October 2018 back in Los Angeles at the Hollywood Palladium. The band then tour Europe in February and March 2019. 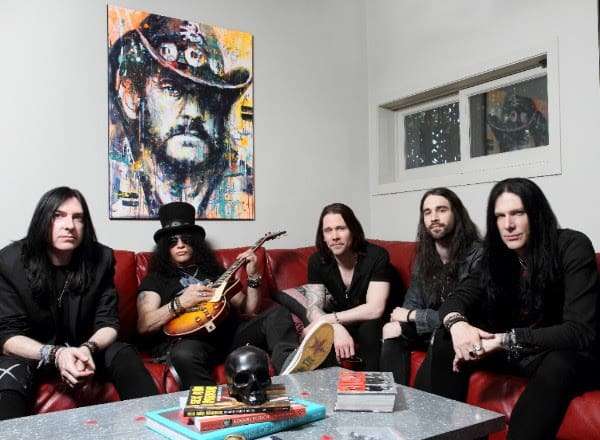 Living The Dream is the new full-length offering from the group which, in addition to Slash and singer Myles Kennedy, also includes bassist Todd Kerns, drummer Brent Fitz and rhythm guitarist Frank Sidoris. Slash and his band re-teamed with producer Michael “Elvis” Baskette (Alter Bridge, Iggy Pop, Incubus) for their third album resulting in the band’s strongest collective statement to date following World on Fire and 2012’s Apocalyptic Love. From the barnstorming, high-octane riffery of opener Call of the Wild to the wah-drenched funk rock of Read Between the Lines, the haunting majesty of Lost Inside the Girl to the swaggering deep-in-the-pocket Seventies grooves of Serve You Right, to the stately, quasi-classical melodic themes of The Great Pretender, LivingThe Dream packs a compendium of sounds and styles into 12 tightly arranged and sharply executed tracks, all of it shot through with Slash’s trademark electrifying and dynamic riffing and high-wire, lyrical solos.
SLASH FT. MYLES KENNEDY & THE CONSPIRATORS (L-R): BRENT FITZ (drums), SLASH (guitar), MYLES KENNEDY (vocals), FRANK SIDORIS (guitar & vocals) and TODD KERNS (bass & vocals),

About Slash Ft. Myles Kennedy & The Conspirators:
Slash–the iconic, GRAMMY-winning, American rock guitarist, songwriter and film producer–has amassed album sales of over 100 million copies, garnered a GRAMMY Award and seven GRAMMY nominations and was inducted into the Rock and Roll Hall of Fame. Slash landed on the top of the charts with his first solo album, Slash (2010) which featured Ozzy Osbourne, Fergie, Myles Kennedy and more. The album debuted at #2 on the Australian ARIA chart and is certified as an ARIA Accredited Platinum album. Shortly after, he formed his current band Slash Ft. Myles Kennedy & The Conspirators–which features Myles Kennedy (lead vocals), Brent Fitz (drums), Todd Kerns (bass/vocals) and Frank Sidoris (rhythm guitar)–who’ve been touring worldwide and making music for over four years. Slash Ft. Myles Kennedy & The Conspirators released the critically acclaimed Apocalyptic Love (2012) which stormed the Australian ARIA Chart at #2 and certified as an ARIA Accredited Gold album, Billboard Top 200 Albums Chart debuting at #4 as the top rock album. Apocalyptic Love has the added distinction of spawning Slash’s first-ever #1 rock radio solo hits: You’re A Lie and Standing In The Sun. Slash released Nothing Left To Fear (2013) the first-ever motion picture he co-produced from SLASHfiction, his film/TV production company specialising in the horror genre. He is currently working on a new film project. Slash Ft. Myles Kennedy & The Conspirators unleashed their second album World On Fire to worldwide praise garnering Slash some of the best critical acclaim of his career. Slash’s third straight solo album to debut in the Top Ten, World On Fire achieved over 12, Top Ten chart debuts around the world and seeing them debut on Australian ARIA Chart at #2. The album’s title track, first single World On Fire ascended to #1 at U.S. Rock Radio. In 2016, Guns N’ Roses re-united and Slash joined Axl Rose and Duff McKagan for the ongoing “Not In This Lifetime Tour” which Billboard now ranks as the fourth-highest grossing tour of all time.

About Stoopid Buddy Stoodios:
Stoopid Buddy Stoodios is an artist-friendly collective that houses some of the finest talent in all of animation, showcasing a knack for creating unique visuals and telling character driven stories with an uncanny sensibility. Stoopid Buddy Stoodios is home to the longest running stop-motion show on television, the Emmy Award-winning Robot Chicken, as well as Sony Crackle’s Emmy Award-nominated SuperMansion with Bryan Cranston, Buddy Thunderstruck for Netflix, and Hot Streets for Adult Swim. Stoopid Buddy Stoodios is currently producing original pilots for Cartoon Network and FreeForm, as well as an animated version of Adam Ruins Everything for TruTV. The company’s multiple-building campus and state-of-the-art facility located in Burbank, CA, makes it one of the largest studios specializing in 2D, puppetry, stop-motion and CG animation in California. The company’s work covers the animation gamut, ranging from charming hand-crafted animation all the way to high-end feature quality
animation.