Multi-platinum selling band SKID ROW will embark on a full Australian tour
this October whilst also hitting Auckland New Zealand. It will be the first
time Australian fans get to see former Dragonforce singer ZP Theart up front
and he will be joined by guitarists Snake Sabo & Scotti Hill, bassist Rachel
Bolan and drummer Rob Hammersmith!

Skid Row started in 1986 when a group of New Jersey kids, armed with their
punk and metal attitude, and a collection of riff-heavy, high-octane songs,
set out to conquer the world, one concert at a time. This determined and
focused approach proved to be an unquestionable success, as the group went
on to clock up numerous Top Ten singles, Gold and multi-Platinum selling
albums and a Number 1 on the Billboard album chart. In other words, the
world was theirs. 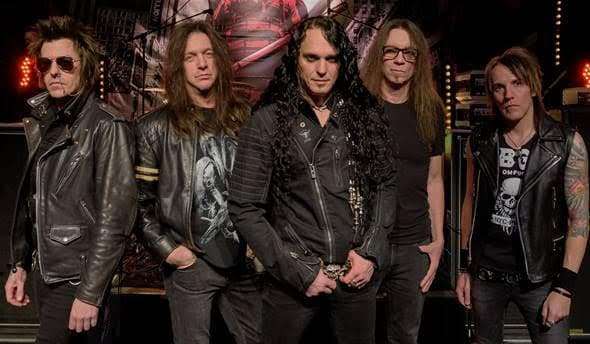 They might have conquered the world several times over, but guitarist Snake
Sabo admits the success hasnât changed him or the band, and Skid Row are
focused on making more earth shattering music. He says: âI will always be
that 16-year-old kid in front of the mirror, pretending to be Ace Frehley or
Michael Schenker. It’s still about writing a great song with your friends,
praying it connects with someone. That has never left me. That willfulness
will always exist, and there’s so much left to say!â

Now, SKID ROW is gearing up to record the final instalment of the United
World Rebellion trilogy. Recording new songs means capturing the signature
SKID ROW energy for drummer Rob Hammersmith. âThat sound and energy is what
resonates with people and knocks them on their ass! We have a lot of great
ideas to work with, so we’re all really excited about this new music.â

As the energy for the new album and tour is reaching fever pitch, enter ZP
Theart. âI’ve been a mad fan of this band since I was a teenager, and to now
be a member of SKID ROW, is beyond any sense of my imagination!â

The Fever Pitch is sure to be reached as SKID ROW unleash all that energy
and hit Australia and NZ this October!

Currently, I’m completely enveloped by writing my book; trying to complete the manuscript for my tome.
Jeff Duff
The car wash scene from Cool Hand Luke will do just fine thank you.
Old Gray Mule
Alice likes the Google. Sime likes taxidermy. It’s a pretty happening scene.
Sweet Jean
I’m in with the Out-Crowd
Dave Warner
Experimental electronica, musical metacreation, multiplicitous media, hacking.
Ollie Brown
My family, my friends, my home.
Cory Putman, Norma Jean
Quirky cabaret bars that serve a mean G&T and boast a stellar cocktail list..which is why you’ll always find me returning to The Butterfly Club! I also love the buzz of a Fringe or Cabaret Festival, or a smart Opening Night. Any excuse for a dress up, really!
Amelia Ryan, Lady Liberty
Right now it’s a room with no lights on. An unmade bed. A laptop with 9% battery and a mosquito that just refuses to die.
Dave Larkin, Dallas Crane
I just do my best to live a life full of the things I love. Rock’n’roll, photography, New York City – they are three things right there that I love a lot!
Paul Miles
Any scene with Al Swearangen & Mr. Wu from the show Deadwood ;)
Mathas
It’s beards.
Nathaniel Beard, The Beards
I am a simple man. My scene is simple. I like playing metal and spending time with my family.
Waclaw ”Vogg” Kieltyka, Decapitated
Leadfinger is a very strange band, hard to define, but we are free.
Stew, Leadfinger
Going to the river on sunny afternoons with the blow up dingys and resting your beers on lily pads.
The Frowning Clouds
Well these days my scene tends to revolve around my computer and being nudged by my dog to take her out for a walk. And then having my wife shout at me for spending time on my computer. I’m loving it actually. I’m quite relishing that scene. I miss them both very much.
Peter Hook, Joy Division/New Order/The Light
Currently its the Yarra River Trail I’m walking along. Generally my scene would be Melbourne. Nothing feels or compares to home.
Simon McConnell, The Delta Riggs
The dog park’s pretty good. I have a couple of miniature pinchers. And they’re the loves of my life. I take them for walks to the dog park; I’ve got a Harley Davidson I ride around. It’s not too exciting. It used to be sex, drugs and rock n roll; now I walk my dogs.
Stan Lee, The Dickies
All the kids who weren’t cool at school and still aren’t. Those people who didn’t manage to become awesome artists and uber hip performers. The raggy dolls who never found a way to make their raggy doll-ness work for them.
Jonathon Duffy
Anywhere there is good company, great conversation, and a glass of red.
Helen Perris
Sitting in the sun, in a nice chair, with a good book.
James Reyne
The TV show “Full House
World Wild
When I’m not working in the studio or doing shows I’m at home with my partner and our baby so I guess they are my scene.
Way of the Eagle
We can be dirty, we can be imperfect, we can be classy, it doesn’t matter. We drift between scenes and eventually may just create our own.
The Ugly Kings
Our scene is folk that are interested in change. Not just music, but breaking the norm, the boundaries and stereotype of Australian ’rock/pop’ music. Unpredictable, the question marks, the new jokers in town. Don’t Believe The Haze.
Slumberhaze
Deep 70s disco, wonky synths, shady lyrics, fairy lights and cheap wine.