Wing Sing Records announces the release of Almurta, the second album by Melbourne band Shepparton Airplane. Due out June 1, Almurta follows up the band’s 2016 self-titled debut and serves up another frenetic blend of jagged melody, pithy punk rock discourse and screaming feedback. Featuring past and present members of The Peep Tempel, Graveyard Train and Tankerville, Shepparton Airplane’s post-punk is delivered with an unparalleled punk rock pedigree.Almurta is driven by the dual guitars of Matt Duffy and Ezra Dowling and powered by the rhythm section — familiar to fans of The Peep Tempel — of Steven Carter on drums and Stewart Rayner on bass guitar.

The record perfectly captures the balance of the band’s abrasive post-punk guitar sound, pounding rhythm section and highlights — without any fear — their craft of writing songs laden with memorable pop hooks.On creating their sophomore album, drummer Steven Carter explains, “before recording this album we didn’t have a lot of time to spend together because of other band commitments. Our approach to recording Almurta was not too dissimilar to our first album, it’s really intense, we channel our creative spirits and it’s then just a matter of trying to control it while it’s happening.” 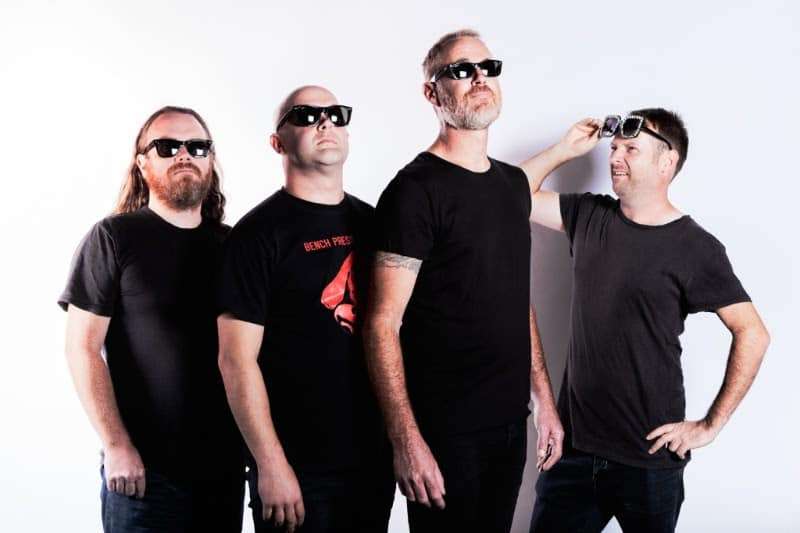 To record the album, the band skipped the studio and headed to regional Victoria to record on a farm in Almurta. The album was recorded and mixed by the band’s guitarist and Melbourne-based engineer Matt Duffy. Steven recalls, “we set up on the farm to record with Matt and his studio gear over four days. We transformed the shed into a recording space, using hay bales to construct sound-absorbing baffles. It worked really well, we managed to create what I think is a very dark album with a lot of sparkle and undertones, but with an overall warm sound.

When I’m not working in the studio or doing shows I’m at home with my partner and our baby so I guess they are my scene.
Way of the Eagle
I just do my best to live a life full of the things I love. Rock’n’roll, photography, New York City – they are three things right there that I love a lot!
Paul Miles

Flanelette pyjama pants.
Timberwolf
The dog park’s pretty good. I have a couple of miniature pinchers. And they’re the loves of my life. I take them for walks to the dog park; I’ve got a Harley Davidson I ride around. It’s not too exciting. It used to be sex, drugs and rock n roll; now I walk my dogs.
Stan Lee, The Dickies

Act III, Scene VI of King Lear. A tense and gripping scene wherein the ageing king informs his three daughters that they have all been accepted as contestants on Family Feud.
Ben Pobjie, comedian
Scones, savory, sweet I don’t mind
The Wooden Sky

I like to think that I belong to the head-strong Independent Music Scene – where we – musos and audience and everyone in between – all make gigs/tours, recordings, releases happen for ourselves and work our arses off to keep it going for the rest of our lives – all for the love of Music!
Florelie Escano
Cool venues with good beer on tap that don’t mind us getting loud and getting room grooving so hard you feel the floor shaking.
Papa G and The Starcats

Right now it’s a room with no lights on. An unmade bed. A laptop with 9% battery and a mosquito that just refuses to die.
Dave Larkin, Dallas Crane
Our scene is this big gorgeous wide world we live in all its majestic splendour!
Kim Salmon, The Darling Downs

I’m in with the Out-Crowd
Dave Warner
Obviously to create music. My family. I love driving my Ferraris.
Yngwie Malmsteen