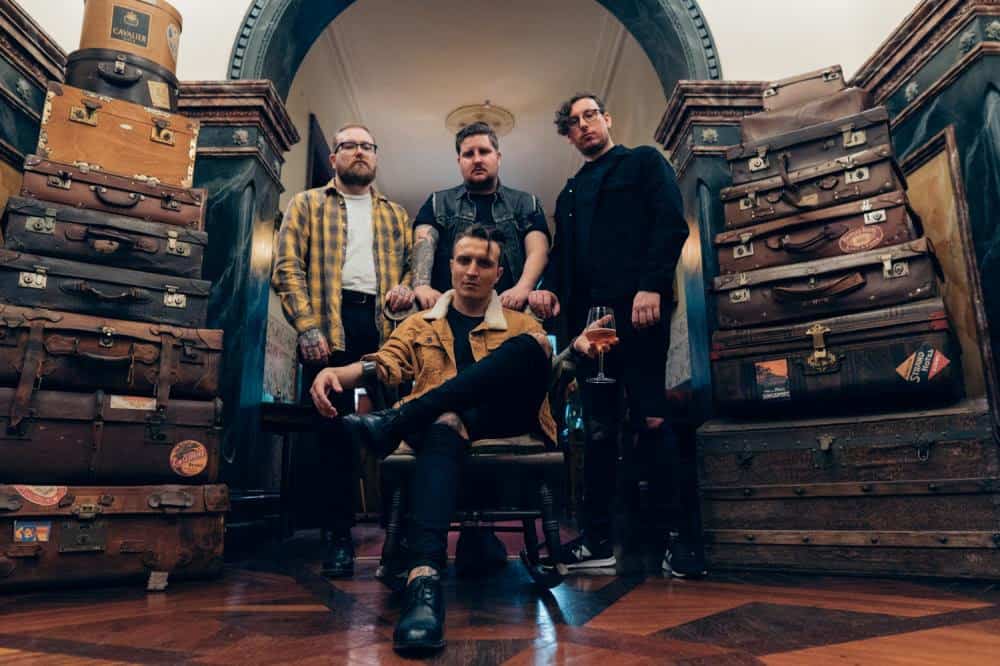 The single comes as a first taste of new material from the band, whose back catalog includes a self-titled EP, albums ‘Divorce’ and ‘Doubt’, as well as a glut of devastatingly heavy singles in 2017 & 2018.

Luke Harriss, vocalist for She Cries Wolf, broke down the themes of the new single and that the band wanted to put something out there that helped people to understand that they were not alone – “Magdalene is about the struggles many of us face with our own depression and poor self esteem/body image.”

Stringer spoke of his experience working with She Cries Wolf on the track, “I was really stoked that the guys from She Cries Wolf asked me to be a part of this track – I recorded my parts at my house and sent them to the guys. It was sick, I just sung in my wardrobe for an hour and a half!”

She Cries Wolf had a whirlwind 2016/2017 – which saw the release of their second album ‘Doubt’, a run of dates with friends Void Of Vision and Justice For The Damned, along with support slots for national and international heavyweights like ’68, Parkway Drive, Every Time I Die, Polaris, letlive., Frank Carter & The Rattlesnakes and Counterparts.

Going into the back half of 2018, the alternative hardcore outfit then bunkered down in the studio for months, hard at work with renewed energy and focus. This new single follows on from the self-released, while-you-wait teaser single ‘

**Cultist**’ in January of 2018 – and now the Queensland quartet are finally ready to unveil the darkest and most personal material of their career.

Late 2018 saw the group drop a “standout” performance at BIGSOUND’s showcases – wowing audiences with a kinetic live-show described by Music Feeds as “…a mesmerising performance wrought with chaotic emotion and haywire energy.”

She Cries Wolf’s new single ‘Magdalene’ featuring Ahren Stringer of The Amity Affliction is out now at iTunes & Apple Music/Spotify/Google Play and all good online stores and streaming outlets.

Act III, Scene VI of King Lear. A tense and gripping scene wherein the ageing king informs his three daughters that they have all been accepted as contestants on Family Feud.
Ben Pobjie, comedian
Our scene is this big gorgeous wide world we live in all its majestic splendour!
Kim Salmon, The Darling Downs

Flanelette pyjama pants.
Timberwolf
When I’m not working in the studio or doing shows I’m at home with my partner and our baby so I guess they are my scene.
Way of the Eagle
Book clubs, philosophy and extreme black metal
Elsen Price

Going to the river on sunny afternoons with the blow up dingys and resting your beers on lily pads.
The Frowning Clouds
Cool small bars with good food, good wine, good company
The Backsliders
The dog park’s pretty good. I have a couple of miniature pinchers. And they’re the loves of my life. I take them for walks to the dog park; I’ve got a Harley Davidson I ride around. It’s not too exciting. It used to be sex, drugs and rock n roll; now I walk my dogs.
Stan Lee, The Dickies

Tunes, mates, and honesty. No dickhead policy!
Buddha In A Chocolate Box
Leadfinger is a very strange band, hard to define, but we are free.
Stew, Leadfinger
My scene is a Punk-hardcore scene or an underground, minimal electronic scene, something grungy – where everyone is wearing black. That’s my vibe; don’t go out until 11 when all the other vampires come out and go home when the sun comes up at 7. Oh shit. Creatures of the night.
Greg Puciato, Killer Be Killed & Dillinger Escape Plan

Currently its the Yarra River Trail I’m walking along. Generally my scene would be Melbourne. Nothing feels or compares to home.
Simon McConnell, The Delta Riggs
I just do my best to live a life full of the things I love. Rock’n’roll, photography, New York City – they are three things right there that I love a lot!
Paul Miles

I like to think that I belong to the head-strong Independent Music Scene – where we – musos and audience and everyone in between – all make gigs/tours, recordings, releases happen for ourselves and work our arses off to keep it going for the rest of our lives – all for the love of Music!
Florelie Escano
Right now it’s a room with no lights on. An unmade bed. A laptop with 9% battery and a mosquito that just refuses to die.
Dave Larkin, Dallas Crane
Alice likes the Google. Sime likes taxidermy. It’s a pretty happening scene.
Sweet Jean