After a winter cooking up new treats for their fans, as well as festival appearances in Europe and Canada, Shapeshifter are returning to Australia for 2 special shows this February.

The lads will be at peak match fitness after powering their way across the New Zealand festival circuit in December and January, bringing a fresh new show but as always covering the full spectrum of music, from soaring soul, high octane rock, future shock electronica to pulsating jungle music and
everything in between.

With lights and visuals that bedazzle and sonics that will vibrate every fiber of your being, every Shapeshifter show raises the bar of what live music can be.

With a pedigree that includes the Big Day Out, Glastonbury, The Big Chill, Parklife, Hospitality in the Dock, as well as some of the most memorable events New Zealand has witnessed, Shapeshifter are renowned for delivering unforgettable performances and are rightly known as New Zealand’s premiere
live electronic act.

Joining them in both Sydney and Melbourne will be UK legend Fracture, who’s innovative use of broken beats have seen him appear on leading labels including Exit and Metalheadz as well as his own Astrophonica imprint. Always pushing the envelope of forward looking bass music his DJ set will be dubplate spotters delight.

Also crossing the ditch in support are the notorious Sunshine Sound System, renowned for warming things up nice for some of New Zealand’s biggest acts and keeping an evening simmering to perfection. 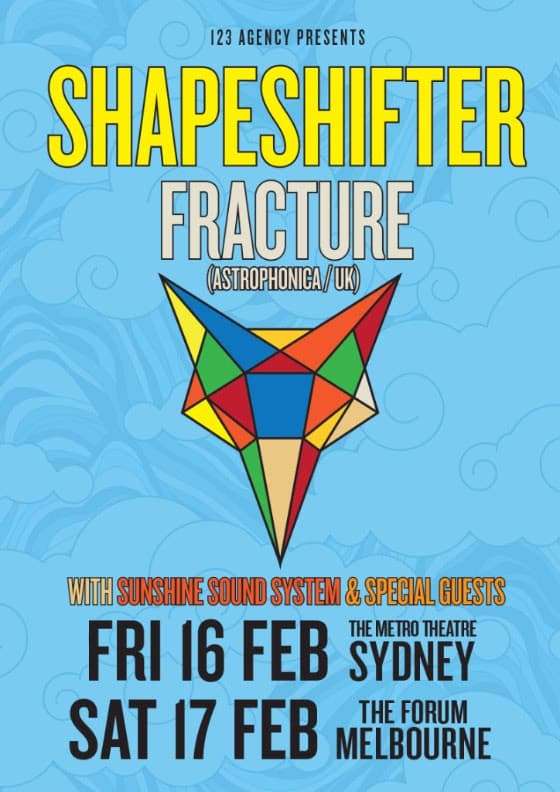 Going to the river on sunny afternoons with the blow up dingys and resting your beers on lily pads.
The Frowning Clouds
My scene is a Punk-hardcore scene or an underground, minimal electronic scene, something grungy – where everyone is wearing black. That’s my vibe; don’t go out until 11 when all the other vampires come out and go home when the sun comes up at 7. Oh shit. Creatures of the night.
Greg Puciato, Killer Be Killed & Dillinger Escape Plan

Currently its the Yarra River Trail I’m walking along. Generally my scene would be Melbourne. Nothing feels or compares to home.
Simon McConnell, The Delta Riggs
Art is my scene. No labels, restrictions or judgement. I love art in all it’s varied glory.
The Last 5 Queers

Act III, Scene VI of King Lear. A tense and gripping scene wherein the ageing king informs his three daughters that they have all been accepted as contestants on Family Feud.
Ben Pobjie, comedian
I love being on a little boat near home in South West Victoria with a fishing line in the water, the Sun coming up or going down. I also love walking the streets of Melbourne or Manhattan or many of the beautiful towns and villages of Ireland or anywhere. My partner and my family are central to it all. I also love being in the midst of a great music session, anywhere, anytime, being transported into the soul of the Universe.
Shane Howard
No set scene. We have played with a variety of bands from King Parrot to The Datsuns. Offer us a show and give us a try!
Los Hombres Del Diablo

The car wash scene from Cool Hand Luke will do just fine thank you.
Old Gray Mule
When I’m not working in the studio or doing shows I’m at home with my partner and our baby so I guess they are my scene.
Way of the Eagle
Experimental electronica, musical metacreation, multiplicitous media, hacking.
Ollie Brown

Right now it’s a room with no lights on. An unmade bed. A laptop with 9% battery and a mosquito that just refuses to die.
Dave Larkin, Dallas Crane
It’s Thonbury. It’s my dreaming. I’ve lived here 30 years and it’s evolved with me. The more I drink wine, the more wine bars appear in the neighbourhood. The more I eat, the more cafes appear in the neighbourhood. Fantastic.
Denise Scott, Comedian

Tunes, mates, and honesty. No dickhead policy!
Buddha In A Chocolate Box
I will continue the continuum, singing my Songline.
Kutcha Edwards

My scene is driving fast cars and shooting guns.
Ace Frehley
It’s a delirium, really, but I like to live like this.
Hugo Race