Scott Darlow is a man who wears many hats, singer-songwriter, aboriginal activist and world vision spokesman his debut solo album ‘S’ orry’ is his very own dreamtime.

For the past 10 years Scott Darlow has dedicated his life to educating youth all over the world on Aboriginal culture and reconciliation. Speaking & performing at over 100 schools around the globe each year Darlow has reached a staggering 500,000 students to date. His message is clear F.L.U.T.E forgiveness, love, understanding, tolerance & empathy. Through his work in Australian schools Darlow is able to promote The Australia Program with World Vision, encouraging families to support Aboriginal communities and provide assistance to those in need in their own backyard.

Title track ‘’Sorry’ from Darlows debut solo album pays homage to his Aboriginal heritage as a proud Yorta Yorta Mob descendant uniting the traditional didgeridoo and a formidable message with powerful lyrics ‘Sorry for tears, down through the year you’ve cried, sorry for respect you’ve been denied’ . This unique blend of country, rock & pop allows Darlow to stand in a league of his own.

Throughout the 10 track album Darlow takes you on a journey from impassioned activist anthems, to gentle ballads with ‘Arms Of Love’ upbeat country-esc vibes with All I Am and teaming up with Australian Icon and Goanna front man Shane Howard to recreate his hit ‘Solid Rock’.

“Darlow gracefully walks the fine line between poignant and heavy-handed, delivering emotions with clichés, and imagery sans bad metaphors. There is no bitterness in his music, rather a story of hope for his people. – Beat Magazine

“Listening to Scott Darlow is mesmerizing – he captivates with stories of his childhood and his current work with high school students across Australia and the world.” – Mindfood Magazine September

“I’m continually blown away and humbled by the response I get when people hear it. I’m so stoked on it and can‘t wait for people to hear it’ Scott Darlow

‘Sorry’ will be released November 11th 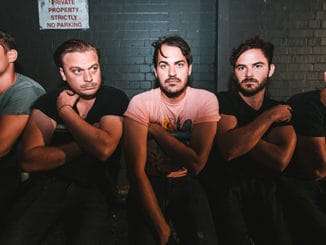 Right now it’s a room with no lights on. An unmade bed. A laptop with 9% battery and a mosquito that just refuses to die.
Dave Larkin, Dallas Crane
Fuck the Fucking Scene question! xo
Fuck The Fitzroy Doom Scene

I like to think that I belong to the head-strong Independent Music Scene – where we – musos and audience and everyone in between – all make gigs/tours, recordings, releases happen for ourselves and work our arses off to keep it going for the rest of our lives – all for the love of Music!
Florelie Escano
Currently its the Yarra River Trail I’m walking along. Generally my scene would be Melbourne. Nothing feels or compares to home.
Simon McConnell, The Delta Riggs
What’s my scene? well…
And another thing I’ve been wondering lately
Oh, baby,
Tell me where have you been?
Now the stage is set
Where’s my Juliet, baby?
Is it maybe
My Midsummer Night’s Dream?
What’s my scene?
Clowns

I’m in with the Out-Crowd
Dave Warner
The Astor Theatre on chapel st. Old cinema with copious amounts of atmosphere playing classic films (Chaplin, Gene Kelly, Kubrick, etc) and me with a honeycomb choc top spilt on my Tshirt because that’s just how I roll.
Jude Perl, Comedian

Going to the river on sunny afternoons with the blow up dingys and resting your beers on lily pads.
The Frowning Clouds
I love being on a little boat near home in South West Victoria with a fishing line in the water, the Sun coming up or going down. I also love walking the streets of Melbourne or Manhattan or many of the beautiful towns and villages of Ireland or anywhere. My partner and my family are central to it all. I also love being in the midst of a great music session, anywhere, anytime, being transported into the soul of the Universe.
Shane Howard
Bed. Pringles. Whisky. Attenborough doco. Wham.
Marlon Williams