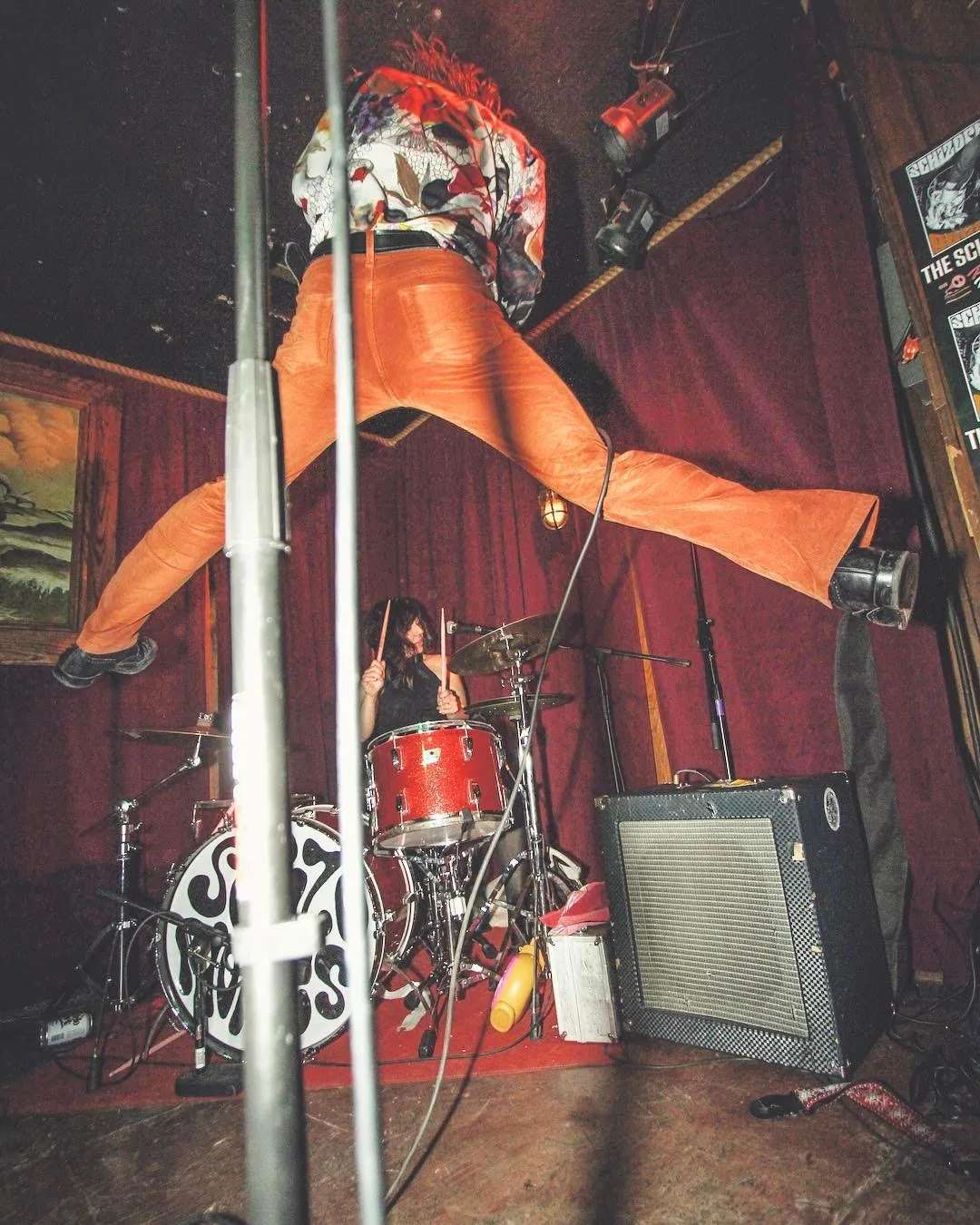 SAN DIEGO’S ELECTRIFYING GARAGE-SOUL ROCKERS THE SCHIZOPHONICS
RETURN TO KICK OUT THE JAMS!

It‘s time, brothers and sisters, to kick out the jams again with San Diego’s dynamite The Schizophonics, whose first two brief and BC (before covid) Australian visits in 2019 and early 2020 back blew the minds and burst the hearts of everyone who saw them.

Returning on the back of their latest LP “Hoof It”, The Schizophonics will reaffirm your faith in rock’n’roll.  Over the last few years this high-energy trio, which is formed around the dynamic husband and wife duo of singer/guitarist Pat Beers and drummer Lety Beers, has built up a formidable reputation around the world as an explosive live act – one that taps into the same unstoppable combination of unbridled rock’n’roll soul energy and showmanship that fueled The MC5 in the heyday of the Grande Ballroom in late ’60s Detroit. In addition to The MC5,  The Schizophonics’ wild live show is heavily influenced by artists like James Brown, Iggy Pop, Little Richard, Jimi Hendrix and The Sonics.

This electrifying outfit first plugged themselves in back in 2009, and have since released three albums (their first, “Land Of The Living”, on legendary LA label Sympathy For The Record Industry) and numerous EPs and singles – most recently a blinding cover of The MC5’s unreleased early showstopper “Black To Comm” backed with a surprise cover of Roxy Music’s “Remake/Remodel“. Not content to exist at the very centre of 21st Century international garage rock circles, they’ve also toured Europe backing the “Mexican Elvis” El Vez (as The Little Richards)and done shows with brass, keys and backing vocalists as The Schizophonics Soul Revue.

Although they churn through bass players quicker than Spinal Tap went through drummers, Pat and Lety’s vision is strong; so strong they were able to record “Hoof It” without any outside help during lockdown. If you’ve never seen them play, you’ve probably never seen a band play with such physical abandon. Shindig magazine described their live show as “like watching some insane hybrid of Wayne Kramer, James Brown, and the Tasmanian Devil” and Spotify has hailed them as the “wildest live band in America”.

Joining the Schizophonics for this evening of outrageous energy and great garage rock are The Unknowns. Hailing from South East Queensland and sharing members and a record label with The Chats, The Unknowns are set to release their second album “East Coast Low” on Bargain Bin Records around the time of this tour. Combining ’70s style punk and power pop in a manner not dissimilar to the classic first three Ramones album, The Unknowns’ music is timelessly exciting and fun for all ages!

Maintaining the high voltage generated by our tour from New York’s blueswailing Daddy Long Legs late last year, Love Police keeps the power switched ON in 2023, with The Schizophonics and The Unknowns, touring together in March. Be there and feel the flow.

How The Schizophonics Became the Wildest Live Band in America – Spotify for Artists
“The Schizophonics never disappoint. From the first number their tight garage sound was punctuated by the fireball that is Pat Beers, using every inch of the stage and the space around it as an arena for his wild, leaping dance moves. How he plays guitar and sings so well is a true miracle. With a sound and special rhythm section to tether him musically, he whirls through the set. A gig by The Schizophonics is one of the coolest things you are ever likely to see; a real garage rock masterpiece.”– Louder Than War 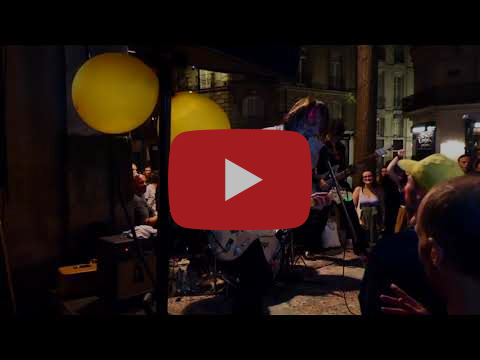 The Schizophonics – “Hoof It”, “Peppermint Twist”, “Jenny Jenny Jenny”/”Whole Lotta Shakin’ Going On” – live and wild in the streets in Nantes, France 2022 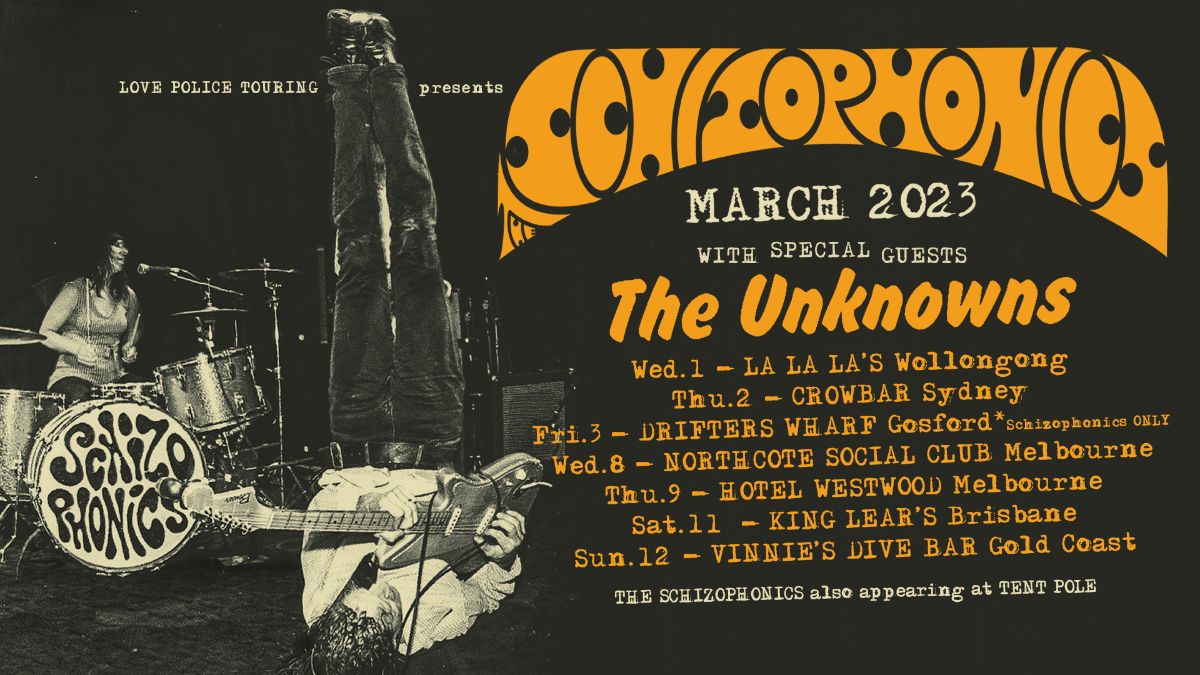 THE SCHIZOPHONICS ON TOUR IN MARCH
WITH SPECIAL GUESTS THE UNKNOWNS 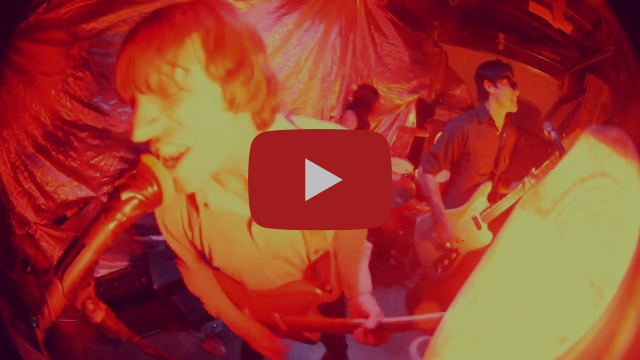 The Schizophonics – Won Your Love

Lush have announced details of the release of the Blind Spot EP on Friday 15th April 2016 on their own Edamame Records. Watch their first single, Out of Control below:   TRACKLIST 1.  Out Of Control 2.  Lost Boy 3.  Burnham […]

Tegan Voltaire, The Voltaire Twins
When I’m not working in the studio or doing shows I’m at home with my partner and our baby so I guess they are my scene.
Way of the Eagle
Our gigs have an air of danger and sex. Beautiful women are free to express themselves and are as dangerous as hell. Everybody can have a good time ’cos there’s a lot of love in the room and we just can’t help but stomp out that primeval swamp boogie ooze.
Chris Russell’s Chicken Walk
If you’re a Max Chillington then you’re our scene.
Gunslingers
It’s beards.
Nathaniel Beard, The Beards
Currently its the Yarra River Trail I’m walking along. Generally my scene would be Melbourne. Nothing feels or compares to home.
Simon McConnell, The Delta Riggs
The dog park’s pretty good. I have a couple of miniature pinchers. And they’re the loves of my life. I take them for walks to the dog park; I’ve got a Harley Davidson I ride around. It’s not too exciting. It used to be sex, drugs and rock n roll; now I walk my dogs.
Stan Lee, The Dickies
Fuck the Fucking Scene question! xo
Fuck The Fitzroy Doom Scene
That’s a hard one, although I do love anything electronic with an indie-pop feel!
Franki
Ep. 1 Series 3 of BBC’s ’Sherlock’ where Sherlock bungee jumps through a window and kisses Molly Hooper.
Miss Adelaide Everheart from Early Burley Burlesque
Cool small bars with good food, good wine, good company
The Backsliders
Our scene is this big gorgeous wide world we live in all its majestic splendour!
Kim Salmon, The Darling Downs
I like to be out in the nature, to get away. Go to the woods. My dad lives in the woods. Maybe once or twice a year I don’t have phone reception there is no Wi-Fi
Fredrik Åkesson, Opeth
Country roots, old time, bluegrass, folk, Americana scene Traditional plus :)
Whitetop Mountaineers
I like to think that I belong to the head-strong Independent Music Scene – where we – musos and audience and everyone in between – all make gigs/tours, recordings, releases happen for ourselves and work our arses off to keep it going for the rest of our lives – all for the love of Music!
Florelie Escano
Well I’m still looking for my scene, and I think I might have found it. Between the pages of What’s My Scene Magazine.
Dave Faulkner, Hoodoo Gurus
Tunes, mates, and honesty. No dickhead policy!
Buddha In A Chocolate Box
What’s my scene? well…
And another thing I’ve been wondering lately
Oh, baby,
Tell me where have you been?
Now the stage is set
Where’s my Juliet, baby?
Is it maybe
My Midsummer Night’s Dream?
What’s my scene?
Clowns
Flanelette pyjama pants.
Timberwolf
Obviously to create music. My family. I love driving my Ferraris.
Yngwie Malmsteen
I just do my best to live a life full of the things I love. Rock’n’roll, photography, New York City – they are three things right there that I love a lot!
Paul Miles
I like the beach more than anything. The beach feels like home all year round. In terms of a scene…I actually prefer to hermit most of the time.
Abbe May
Bed. Pringles. Whisky. Attenborough doco. Wham.
Marlon Williams
Cool venues with good beer on tap that don’t mind us getting loud and getting room grooving so hard you feel the floor shaking.
Papa G and The Starcats
I don’t wish to belong to any scene that would have me as a member (with thanks to Groucho Marx).
Bob Spencer, Raw Brit
Local bands at sticky carpet venues. Vinyl. Social networking. Keeping healthy in order to play full throttle live sets. Loud rehearsals. Good people with creative ideas. PRIMITIVE ROCK.
Jon S Williams of City of Cool
My bedroom
Nantes
It’s a delirium, really, but I like to live like this.
Hugo Race
Comedy, surreal show girls, burlesque and theatre
MC KREWD
Leadfinger is a very strange band, hard to define, but we are free.
Stew, Leadfinger
Art is my scene. No labels, restrictions or judgement. I love art in all it’s varied glory.
The Last 5 Queers
All the kids who weren’t cool at school and still aren’t. Those people who didn’t manage to become awesome artists and uber hip performers. The raggy dolls who never found a way to make their raggy doll-ness work for them.
Jonathon Duffy