Sam Perry is a name thousands of Australians have fallen in love with through 2018. The young vocal loop artist struck a chord with Australian music fans and viewers of The Voice, where Perry took out the winner’s title for 2018.

Shifting the goalposts of what was considered the norm for music contestants on this platform, Perry’s musical style and curiosity when it comes to the manipulation and delivery of sounds in different ways, quickly made him a household name.

A seasoned performer, The Voice gave Perry the opportunity to finesse an already thriving skill set on a huge stage, connecting with his fans and continuing his creative journey under the guidance of US superstar, Kelly Rowland. “Kelly and I created a strong connection, she is wonderful and really helped me with the singing side of my craft.”

Emerging from the experience with bolstered confidence and ambition in spades, Perry hit the ground running in striking out further on his own in the independent arena. Inspired by other Australians who had been able to take their interest in looping overseas, Perry followed suit and the results were quick to speak for themselves; connecting with fellow artist Dub Fx over a shared love for music, looping and travel “I think I knew I wanted to make music solo, I had done the whole band thing for over 5 years…What got me into looping was an artist called Dub Fx, I spent countless hours watching his videos on YouTube, as soon as I saw him, I knew that’s what I wanted to do. I could be my own one man band.”

Working in such a national spotlight in the way Perry did would be enough of a challenge to shake the confidence of any artist. Nerves were replaced with excitement however, leaving Perry chomping at the bit to embark on a bright new chapter of music. Learning to adapt and use the platform he’d been given to continue on his grind behind the scenes, eventually leading him to this point – branching out on his first ever national tour. “Gaining a fan base has given me more confidence, people seem to be digging what I do and that’s a big boost in itself. The experience has been so wonderful for me and I guess we will see what happens in the future, but this year is very busy and I feel very grateful for that.”

With new music in the works that will bring him to more Australian audiences before the year is out, Perry is excited for what is on the very near horizon. “My new music is coming together well, I have a lot to do and more to learn, but it’s exciting. I also can’t wait to tour Australia and show everyone what I have been working on.”

Here’s a taste of the Sam Perry show – clever, dynamic and primed to strike at the core of every music fan looking for something unique in a live performance.

‘NOT A DJ’ SUPPORT COMPETITION

2018’s experiences have set Perry up for a wild ride, one that he wants to get some exciting new artists in on too. A strong supporter of new talent, Perry has put a call out for young artists to submit their music, with one selected to support him on his national tour in each state “Starting out as a local artist in a small town, I know all too well how hard it can be to meet the right people, and be heard amongst the already established bands. I’m not great at networking and there is not really a rule book to follow. All I knew, is that I wanted to perform to a room of people, that were there to listen. I can’t wait to hear all your music, and find a local support act to join me in their city on my tour around the country” ..

To be involved, send a demo (SoundCloud or private download link), bio and photo to info@michaelparisimgmt.com

Perry will be touring through November and December, bringing his thriving live show to venues around the country. 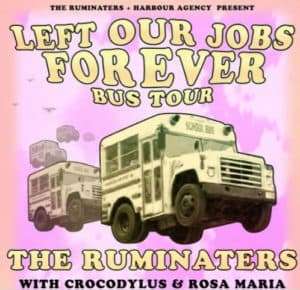 Scene News: GROUPLOVE exit the bus, and The Ruminaters continue their ‘Boys Off Work’ tour