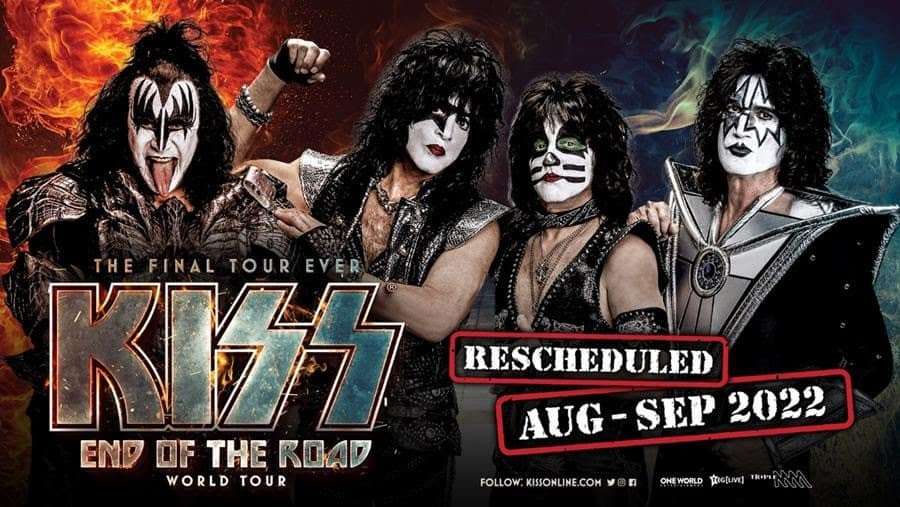 With the recent announcement that Western Australia’s borders will remain closed for an indefinite period of time, One World Entertainment and TEG Live have been forced to postpone the Kiss ‘End of the Road’ tour until August / September 2022.  The band is passionate and determined to perform for all their Australian fans – they do not want to leave Perth out of the equation.

The ‘End Of The Road’ tour, which began in January 2019, is undoubtedly the biggest and best KISS show ever (and that’s saying something), receiving incredible reviews from both diehard KISS fans and the media at sell-out shows across the globe.

Tickets and VIP packages purchased for the March / April 2022 concerts remain valid for the rescheduled dates without need for exchange. Ticket holders will be emailed with their new dates and will not need to take any further action.

Paul Stanley, Gene Simmons, Eric Singer and Tommy Thayer are now ready to rock’n’roll all nite with the KISS Army across Australia one last time.

The Rock & Roll Hall of Famers first visited our shores in 1980 during ‘KISSteria’, kick- starting a deep connection between the band and Aussie fans that has continued to thrive for more than four decades.

With countless timeless hits like ‘I Was Made For Loving You’, ‘Detroit Rock City’, ‘Love Gun’, ‘Shout It Out Loud’, ‘Lick It Up’, ‘God Gave Rock’n’Roll To You’ and the knock -em dead anthem that closes every KISS show Rock’n’Roll All Nite’, the KISS legacy has continued to grow, generation after generation.

Along the way the band has sold more than 100 million albums and through relentless touring has proven again and again why they are the most iconic live show in rock n roll.

Come and celebrate the extraordinary career and music of KISS.

“All that we have built and all that we have conquered over the past four decades could never have happened without the millions of people worldwide who’ve filled clubs, arenas and stadiums over those years. This will be the ultimate celebration for those who’ve seen us and a last chance for those who haven’t. KISS Army, we’re saying goodbye on our final tour with our biggest show yet and we’ll go out the same way we came in… Unapologetic and Unstoppable,” said KISS.

“Even if you’ve seen a KISS show before, you’ve never seen a show quite like this one.”  Omaha.com.au

“KISS spare no cost when it comes to putting on one of the greatest rock shows on the planet. It’s flashy, it’s rockin’ and it has the energy and showmanship that made KISS a household name.”  OnMilwaukee

“An explosive thrill-ride.” The Oklahoman

“The spectacle KISS brings to the live show has never failed. It was an explosive, unapologetic, bombastic KISS concert that shows exactly why the band has lasted this long.”  Dress Reviews

“Whether it’s timeless, hard-hitting rock and roll, an unforgettable visual presentation or that relentless merchandising, KISS breathes fire in every aspect of its being, and, of course, very often literally.” iHeartRadio

KISS VIP Packages, which may include access to the KISS acoustic set and Q&A, invitation to the KISS Army Captain’s lounge, exclusive merchandise and premium seat locations will be available at all shows. Visit  www.kissonline.com for details.

Event goers can take advantage of Ticketek’s world-leading partnership with Afterpay. Available via the Ticketek app or website, Afterpay is the world’s largest buy-now-pay-later service, offering fans greater flexibility to pay for tickets in four equal instalments and secure seats with the first payment.

For all KISS information:   www.kissonline.com

Proudly presented by One World Entertainment and TEG Live.

ABOUT ONE WORLD ENTERTAINMENT:

With Andrew McManus at the helm, One World Entertainment has had a fundamental role in entertaining Australians and New Zealanders for more than two decades.  Touring artists include KISS, Fleetwood Mac, Motley Crue, Guns n Roses, Pavarotti, Andrea Bocelli, Blondie, Simple Minds, Stevie Nicks to name a few, plus the festival brands Raggamuffin and Under The Southern Stars.   For more information:  http://www.oneworldentertainment.com.au

Clap Clap Riot’s album launch Australian tour — scheduled to run Thursday to Saturday this week — has unfortunately had to be cancelled due to the sudden and unexpected passing of the band’s close friend, […]

Kim Wilde’s scene is “hanging out” ~ in her garden. Not quite what you’d expect from such a talented and renowned pop icon, but as Wilde explains it’s about finding a balance: “My favourite place […]

In Memphis, January, 2015, Jody Stephens discussed how Those Pretty Wrongs came to be so right. “It started with a request for me to sing a few songs at the Nuart Theater for a screening […]

Tegan Voltaire, The Voltaire Twins
Obviously to create music. My family. I love driving my Ferraris.
Yngwie Malmsteen
Our scene is this big gorgeous wide world we live in all its majestic splendour!
Kim Salmon, The Darling Downs
I will continue the continuum, singing my Songline.
Kutcha Edwards
I like to think that I belong to the head-strong Independent Music Scene – where we – musos and audience and everyone in between – all make gigs/tours, recordings, releases happen for ourselves and work our arses off to keep it going for the rest of our lives – all for the love of Music!
Florelie Escano
My bedroom
Nantes
It’s beards.
Nathaniel Beard, The Beards
All the kids who weren’t cool at school and still aren’t. Those people who didn’t manage to become awesome artists and uber hip performers. The raggy dolls who never found a way to make their raggy doll-ness work for them.
Jonathon Duffy
If you’re a Max Chillington then you’re our scene.
Gunslingers
Hiking a 14K foot mountain in Colorado
Cole Washburn
“Malcolm Hill is a lifetime member of the Melbourne Music Mafia and part of the ratpack of post punk Melbourne artists who have been keepin’ it real across diverse art forms for thirty years.”
Malcolm Hill
Leadfinger is a very strange band, hard to define, but we are free.
Stew, Leadfinger
Our gigs have an air of danger and sex. Beautiful women are free to express themselves and are as dangerous as hell. Everybody can have a good time ’cos there’s a lot of love in the room and we just can’t help but stomp out that primeval swamp boogie ooze.
Chris Russell’s Chicken Walk
Experimental electronica, musical metacreation, multiplicitous media, hacking.
Ollie Brown