Cherry Bar is bringing out their favourite band in the world to mark the triumphant return of CherryRock. From Portland Oregon to AC/DC Lane Stoner Rock icons RED FANG will headline the 9th annual CherryRock Street rock n roll festival in AC/DC Lane Melbourne on Sunday 10 May. 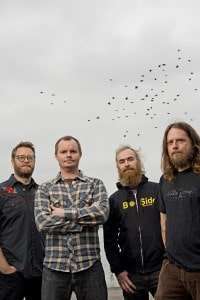 It had been feared that the new 108 Flinders Street residential development and Pastuso restaurant at the foot of AC/DC Lane may have spelt the end to the plucky street rock festival, especially after Cherry Bar’s annual November event CherryFest was cancelled last year. Cherry Bar owner and booker James Young explains, “The new residents can just suck it up, but we did have concerns with Pastuso because they are a very popular Peruvian restaurant open 7 days and nights a week. Thankfully David Parker and the guys are really good guys and we came to an ingenious solution. They host their annual staff party on Sunday 10 May and Cherry gives them all free tickets to come to CherryRock015. Bang! Deal done. Turn everything up!”

As usual there will be 2 stages, 13 acts and no clashes. In addition to the monster coup of confirming Red Fang (USA) CherryRock015 will also feature the volcanic sounds of Beastwars (NZ), the girl geetar power of HITS (Bne), Child (Cherry Awards 2014 Act of the Year), the hirsute decibels of F*ck The Fitzroy Doom Scene, The Simpsons-inspired doom rock duo Dr. Colossus, tenth birthday celebrations from My Left Boot and the cut-off denim shorts with ‘tude of Los Hombres Del Diablo (Syd) in a line-up that obviously oozes the heavy stoner rock genre that Melbourne has grown (literally, on faces, heads and backs) to love, nurture and produce.

Tell us about your upcoming single and show? To celebrate the release of our new single Me Verses You we are playing the Tote Aug 17. The In the Out and Teenage Dads are joining […]

Cherry is proud to announce that it will be hosting its Tenth Birthday edition of Australia’s only dedicated rock n roll street festival CHERRYROCK016 onSunday 1 May 2016 in AC/DC Lane and at Cherry Bar. […]

Experimental electronica, musical metacreation, multiplicitous media, hacking.
Ollie Brown
Currently its the Yarra River Trail I’m walking along. Generally my scene would be Melbourne. Nothing feels or compares to home.
Simon McConnell, The Delta Riggs
Obviously to create music. My family. I love driving my Ferraris.
Yngwie Malmsteen
All the wandering. The bastards and the angels. The sound of the rain and the pains of the heart. The silence. All the houses and all the rooms. All the keys and phones.
Raised By Eagles
My scene is driving fast cars and shooting guns.
Ace Frehley
If you’re a Max Chillington then you’re our scene.
Gunslingers
Our scene is in the city of Bath, a small city with a very big musical identity, we play the British festivals and I am also in the ’choirs scene’. We are also in other bands for fun, music all the way, roll on summer!
Su Hart, Baka Beyond
Deep 70s disco, wonky synths, shady lyrics, fairy lights and cheap wine.