Record Store Day, now in its eighth year, happens on the third Saturday in April. The day showcases independent record stores around the world which feature exclusive releases, discounts, limited edition copies, along with some stores offering live music and refreshments. It’s a celebration of music, of similar minded folk buying a rare album they’ve been searching for, getting their hands on a limited edition copy of an album by lining up outside the store before opening hours, and enjoying live music on offer at some of the stores.

A trek around the CBD in Melbourne takes What’s My Scene to Wax Museum Records, Basement Discs and Collector’s Corner/Missing Link to check out what’s happening in each of these record stores.

The queue in Wax Museum Records spreads outside the door, whilst a DJ spins discs in front of the store in Campbell Arcade. Tracey McNeil and The Good Life are playing laid back tunes to a crowd of punters enjoying refreshments on offer at Basement Discs. and later Triple R’s Neil Rogers is awarding giveaways to punters answering music trivia questions. Music fans are scoring some well sought after vinyl at Collector’s Corner/Missing Link, including a limited edition, red vinyl, new pressing of the late Rowland S Howard’sPop Crimes.

I purchased my first album in the late 70’s from my then local record store in East Bentleigh Eclipse Records which sadly no longer exists. It was The Best of Abba. In 1980 I discovered The Beatles cartoons on TV, and listening to their catchy pop tunes initiated my obsessive teenage love of The Beatles, and later Britpop. In the 1980’s as an older teen I frequented Central Station Records to buy the latest dance 12″ singles, and tuned in religiously to Alan Rados’ now defunct Party Show, celebrating dance music, on Triple R. The 90’s meant going to gigs to see both local and international acts ceaselessly, along with buying records from Greville Records, and Au Go Go in Malvern. Many of the old record stores I used to frequent have since closed down. There used to be stores in every suburb. Of the stores mentioned Greville Records is the only one still standing, and going strong. 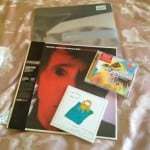 Record Store Day is a chance to celebrate music, make purchases and help support independent record stores, but don’t leave it for only one day of the year. Visit your local or favourite record store regularly, buy up and keep the independents alive. Hear it from the retailers themselves; Nicholas Simonsen from Collector’s Corner/Missing Link and Guy from Wax Museum Records talk to What’s My Scene about Record Store Day and what it means to them.

Legendary Radio presenter and DJ, Max Crawdaddy chats to What’s My Scene about DJing and what goes into his famous free vegetarian chilli served up every Sunday afternoon at the Cherry Bar during Sunday Blues […]

Record Store Day have announced thier abbassador for this year – Dave Grohl. If he doesn’t get you visiting a record store, nothing will. Check out his statement and video below: A STATEMENT FROM THE […]

Tegan Voltaire, The Voltaire Twins
I think my style is more just making cameos in everyone else’s scene.
Mojo Juju
Aside from music and everything creative, I love open-mind people, unexpected humour, seeing the world and nature, riding my bicycle, playing billiards. I’m also a fan of coffee, whiskey and most things vintage.
Jessica Stuart Few
Currently its the Yarra River Trail I’m walking along. Generally my scene would be Melbourne. Nothing feels or compares to home.
Simon McConnell, The Delta Riggs
I’m in with the Out-Crowd
Dave Warner
The dog park’s pretty good. I have a couple of miniature pinchers. And they’re the loves of my life. I take them for walks to the dog park; I’ve got a Harley Davidson I ride around. It’s not too exciting. It used to be sex, drugs and rock n roll; now I walk my dogs.
Stan Lee, The Dickies
Well these days my scene tends to revolve around my computer and being nudged by my dog to take her out for a walk. And then having my wife shout at me for spending time on my computer. I’m loving it actually. I’m quite relishing that scene. I miss them both very much.
Peter Hook, Joy Division/New Order/The Light
Hiking a 14K foot mountain in Colorado
Cole Washburn
The car wash scene from Cool Hand Luke will do just fine thank you.
Old Gray Mule