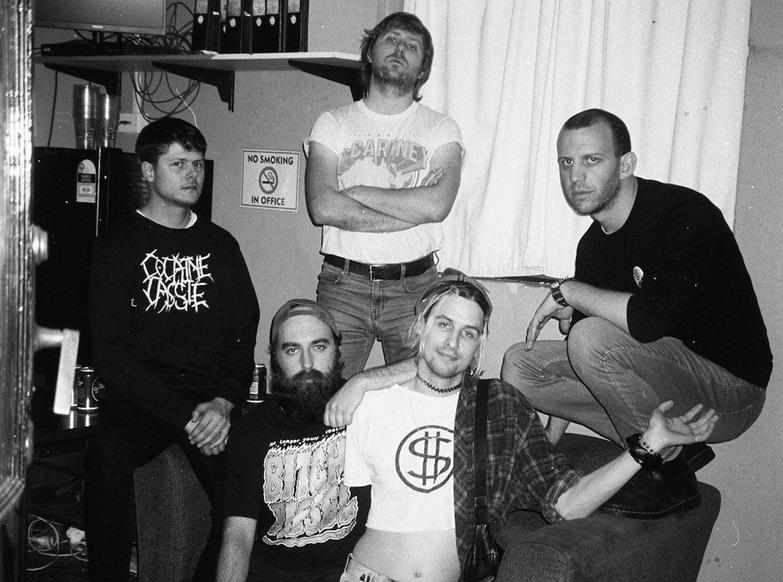 “Private Function might just be strong contenders for the title of the best band in Australia right now… a group who use their platform to succeed in the rock world while simultaneously turning the genre back on itself and laughing at it.” – Rolling Stone***“When gigs are a distant memory, when strong anti-establishment sentiment ripples across the world, all you can do as an artist is to keep making art without distracting from the real issues at hand… Combine that with an affinity for taking the piss, and you’ve got yourself a foolproof method for turning heads.” – NME***“Known for their ferocity, whether it’s through their always-unexpected live shows, or in recording, where the group move with a pace that would leave you out of breath just from listening to it… There’s something that just makes them feel like the most brilliant, coolest people out there.” – Pilerats

Following on from the phenomenal success of their 2020 album release, Whose Line Is It Anyway?, which saw the band make their top ten ARIA chart debut and snag a European record deal with Spanish label FOLC Records, Australia’s titans of the main stage Private Function have today announced ‘Whose Tour Is It Anyway?’, the band’s largest tour run to date.

Private Function are indisputably the most entertaining rock’n’roll band in Australia right now. Renowned for their explosive live shows, livewire intensity and outrageous stage presence, nothing is off-limits when Private Function hit the stage, with the outfit consistently delivering fans a show they’d never have expected nor seen before.

Their recent stadium rock showdown at Sidney Myer Music Bowl, which featured gargantuan pyrotechnics, an electric chair and a very unfortunate Gobbledok, is a true testament to their wild, volatile and unparalleled live shows. If you haven’t caught the Private Function train yet, now is your chance.

Kicking off at Yours & Owls Festival in Wollongong in April and crisscrossing through the country before settling at the Corner Hotel in July, ‘Whose Tour Is It Anyway?’ will see the band fire up stages in major capital cities and regional centres, delivering tracks from their widely acclaimed album to fans across Australia.Tickets to Private Function’s ‘Whose Tour Is It Anyway?’ are available now.

Private FunctionWhose Tour Is It Anyway?

Right now it’s a room with no lights on. An unmade bed. A laptop with 9% battery and a mosquito that just refuses to die.
Dave Larkin, Dallas Crane
Fuck the Fucking Scene question! xo
Fuck The Fitzroy Doom Scene

Well I’m still looking for my scene, and I think I might have found it. Between the pages of What’s My Scene Magazine.
Dave Faulkner, Hoodoo Gurus
I don’t wish to belong to any scene that would have me as a member (with thanks to Groucho Marx).
Bob Spencer, Raw Brit

Tunes, mates, and honesty. No dickhead policy!
Buddha In A Chocolate Box
My bedroom
Nantes

I love being on a little boat near home in South West Victoria with a fishing line in the water, the Sun coming up or going down. I also love walking the streets of Melbourne or Manhattan or many of the beautiful towns and villages of Ireland or anywhere. My partner and my family are central to it all. I also love being in the midst of a great music session, anywhere, anytime, being transported into the soul of the Universe.
Shane Howard
I like to think that I belong to the head-strong Independent Music Scene – where we – musos and audience and everyone in between – all make gigs/tours, recordings, releases happen for ourselves and work our arses off to keep it going for the rest of our lives – all for the love of Music!
Florelie Escano
The car wash scene from Cool Hand Luke will do just fine thank you.
Old Gray Mule
Any scene with Al Swearangen & Mr. Wu from the show Deadwood ;)
Mathas

I’m in with the Out-Crowd
Dave Warner
Currently its the Yarra River Trail I’m walking along. Generally my scene would be Melbourne. Nothing feels or compares to home.
Simon McConnell, The Delta Riggs
Ep. 1 Series 3 of BBC’s ’Sherlock’ where Sherlock bungee jumps through a window and kisses Molly Hooper.
Miss Adelaide Everheart from Early Burley Burlesque