“In 1993 Primal Scream went to Memphis to make an album with Tom Dowd and the Muscle Shoals rhythm section, that album never saw the light of day , until now …..”Bobby Gillespie 2018

Following the recent discovery of these tracks in a box lurking in Andrew Innes’ basement, Primal Scream will release the original studio recordings from Memphis of the tracks that eventually became their 1994 album GIVE OUT BUT DON’T GIVE UP October 12th on Sony Music Commercial Group.

Teaming up with legendary producer Tom Dowd and the Muscle Shoals rhythm section of David Hood (bass) and Roger Hawkins (drums) at Ardent Studios in Memphis, the resulting recordings from those classic sessions showcase the more country soul, rock’n’roll side to a band who continue to surprise. It’s Primal Scream as you’ve never heard them before.

Dowd’s deft production, coupled with the merging of this sublime rhythm section and one of the UK’s best ever bands, led to the creation of nine glorious tracks that run the gamut between blues, gospel and brilliant songwriting, available for the first time. 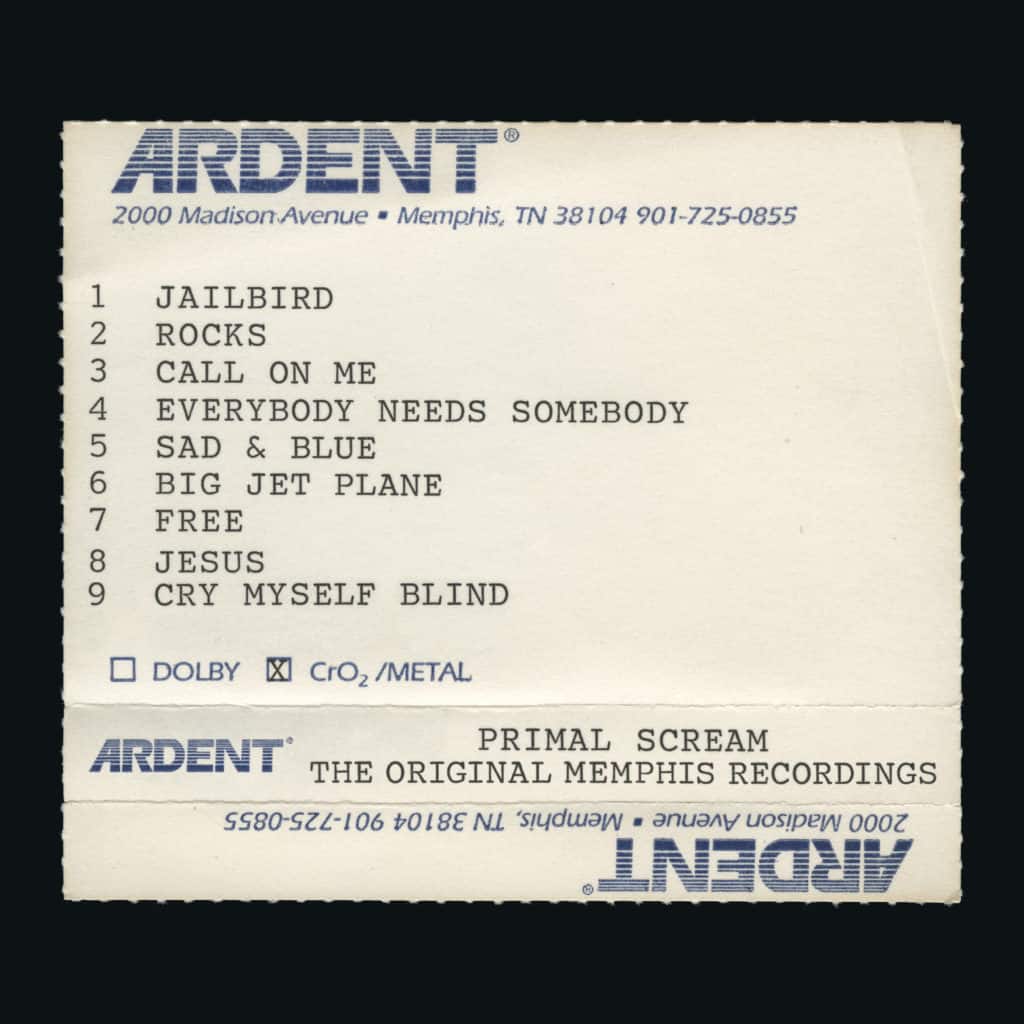 “I felt we went down there with such good intent, but somehow we lost our way afterwards,”Bobby Gillespie admits. “There’s definitely a lesson to be learned about how creativity can go down the wrong track. We’re a band that constantly keeps moving and doesn’t look back, but, for years, I felt bad about us going to Memphis and not doing what we set out to do. Hearing these songs after all this time has made everything all right again. I feel redeemed.”

After their genre-defying breakout album SCREAMADELICA (1991), now widely regarded as one of greatest albums of all time, Primal Scream relocated to Memphis in 1993 to record what would become GIVE OUT BUT DON’T GIVE UP.

Once the band and Creation Records’ boss Alan McGee heard the recordings, however, they were both confused and underwhelmed. Their inner punks got the better of them and they brought producer George Drakoulias onboard to overhaul the recordings, with the band replacing, guitar, bass and drum parts over several sessions in the ensuing weeks until they were left with what became GIVE OUT BUT DON’T GIVE UP.

There will be a BBC 4 documentary behind the GIVE OUT BUT DON’T GIVE UP story broadcasting later this year.

GIVE OUT BUT DON’T GIVE UP The Original Memphis Recordings formats and tracklisting. ** NB: ALL TRACKS ARE PREVIOUSLY UNRELEASED! **

Flanelette pyjama pants.
Timberwolf
Our scene is folk that are interested in change. Not just music, but breaking the norm, the boundaries and stereotype of Australian ’rock/pop’ music. Unpredictable, the question marks, the new jokers in town. Don’t Believe The Haze.
Slumberhaze

Well I’m still looking for my scene, and I think I might have found it. Between the pages of What’s My Scene Magazine.
Dave Faulkner, Hoodoo Gurus
When I’m not working in the studio or doing shows I’m at home with my partner and our baby so I guess they are my scene.
Way of the Eagle
Bed. Pringles. Whisky. Attenborough doco. Wham.
Marlon Williams

Right now it’s a room with no lights on. An unmade bed. A laptop with 9% battery and a mosquito that just refuses to die.
Dave Larkin, Dallas Crane
World/folk. Acoustic and proud of it!
Ilana Cravitz, The London Klezmer Quartet

I’m in with the Out-Crowd
Dave Warner
I think my style is more just making cameos in everyone else’s scene.
Mojo Juju