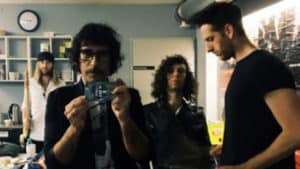 Melbourne’s Pretty City are soon bound for the wild vibes of Texas and SXSW but before the band departs, they’re leaving fans with a sneaky parting gift in new single, ‘Simone’.

Taken from the band’s forthcoming record Cancel the Future (out this March), ‘Simone’ is a strong starter for this new chapter of Pretty City’s sonic journey. Where their debut album ‘Colourize’ was unleashed, drenched in acid tinged flair back in 2016, ‘Simone’ sees the band swap a more introspective approach to songwriting for a glammed up, brash projection of music that Ziggy Stardust-era Bowie would be proud of.

A natural progression for Pretty City, a band who has thrived on having a melting pot of individual influences at their disposal, ‘Simone’ is a snapshot of the group’s present creative frame of mind. “It’s hard to pinpoint where we all meet musically, as there’s a lot of diverse musical tastes and training, yet we have been able to focus all of that into one sound that is unmistakably us.” – Johnny Rock, Pretty City

Built off a musical formula Pretty City know and have employed brilliantly in the past, ‘Simone’ is a girl you’ll definitely want to spend time with. Put one part catchy hook in with two parts driving guitar and percussion, finish off with a healthy dose of infectious vocal melody and you have ‘Simone’. Best enjoyed turned up loud.

‘Simone’ is out now. ‘Cancel The Future’ will be released March 23rd 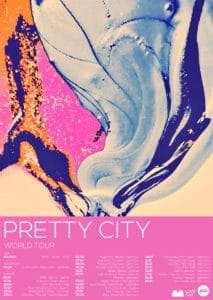 Sometimes, the music really does do the talking. Melbourne psych rockers, Pretty City started from an incredible SXSW appearance in 2016, which saw them gain critical acclaim.“…only a few more people were fortunate enough to squeeze […]

Tell us about your new single/ album/ tour? Our new single ‘Mary Go Round’ is a bit different for us. It still has the melding of psyche rock and shoegaze elements, but presents them in […]

Q&A by Hugh Matthews (vocals and guitar) Tell us about your new single/ album/ tour? ‘Colorize’ is our debut LP, it’s a psych-pop record that I’m really excited to share with the world. There’s an […]

Tunes, mates, and honesty. No dickhead policy!
Buddha In A Chocolate Box
Right now it’s a room with no lights on. An unmade bed. A laptop with 9% battery and a mosquito that just refuses to die.
Dave Larkin, Dallas Crane
I don’t wish to belong to any scene that would have me as a member (with thanks to Groucho Marx).
Bob Spencer, Raw Brit

Leadfinger is a very strange band, hard to define, but we are free.
Stew, Leadfinger
Fuck the Fucking Scene question! xo
Fuck The Fitzroy Doom Scene

My scene is driving fast cars and shooting guns.
Ace Frehley
Going to the river on sunny afternoons with the blow up dingys and resting your beers on lily pads.
The Frowning Clouds
Flanelette pyjama pants.
Timberwolf
Comedy, surreal show girls, burlesque and theatre
MC KREWD

When I’m not working in the studio or doing shows I’m at home with my partner and our baby so I guess they are my scene.
Way of the Eagle
I love being on a little boat near home in South West Victoria with a fishing line in the water, the Sun coming up or going down. I also love walking the streets of Melbourne or Manhattan or many of the beautiful towns and villages of Ireland or anywhere. My partner and my family are central to it all. I also love being in the midst of a great music session, anywhere, anytime, being transported into the soul of the Universe.
Shane Howard
Currently, I’m completely enveloped by writing my book; trying to complete the manuscript for my tome.
Jeff Duff