Po’ Boy Quarter joins forces with Ding Dong Lounge to present the most colourful Food & Music event of the season on Tuesday, 9 Feb at Piazza Italia, Argyle Street in Carlton.

Some may recall last year’s event, which was held near Melbourne General Cemetery in Lygon Street. Organisers were expecting to cater to around 500 people and were overwhelmed by public response to the event, which drew around 7000 punters, who came along mostly through word of mouth. This year’s event will be ticketed and held at a brand new venue with even more to taste, hear and see.

Only 1500 tickets are available to this year’s Fat Tuesday family-friendly New Orleans style event at $22+BF or $28 on the door, with kids under 15 free entry if accompanied by an adult. Buy tickets here: https://fattuesfestmelb.eventbrite.com.au/

The event will be hosted by RocKwiz Supremo Brian Nankervis and includes fantastic local DJ’s Mohair Slim (PBS) and Bruce Milne (RRR). Multiple bar areas and a smorgasbord of Southern food stalls will be available to attendees.

Entertainments including a funky second line brass band parade, a fortune teller’s booth and a costume competition that will culminate with the crowning of Melbourne’s very first King and Queen of Mardi Gras! 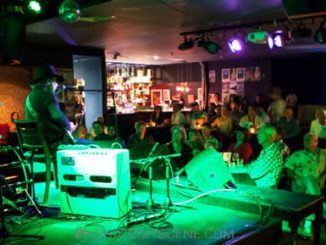 Well I’m still looking for my scene, and I think I might have found it. Between the pages of What’s My Scene Magazine.
Dave Faulkner, Hoodoo Gurus
Currently, I’m completely enveloped by writing my book; trying to complete the manuscript for my tome.
Jeff Duff

I’m in with the Out-Crowd
Dave Warner
My scene is Brunswick. I love it. It provides me with just about everything I need.
About Charlie Marshall

My scene is driving fast cars and shooting guns.
Ace Frehley
I will continue the continuum, singing my Songline.
Kutcha Edwards

Going to the river on sunny afternoons with the blow up dingys and resting your beers on lily pads.
The Frowning Clouds
The car wash scene from Cool Hand Luke will do just fine thank you.
Old Gray Mule
Act III, Scene VI of King Lear. A tense and gripping scene wherein the ageing king informs his three daughters that they have all been accepted as contestants on Family Feud.
Ben Pobjie, comedian
I just do my best to live a life full of the things I love. Rock’n’roll, photography, New York City – they are three things right there that I love a lot!
Paul Miles

Tunes, mates, and honesty. No dickhead policy!
Buddha In A Chocolate Box
Our scene is in the city of Bath, a small city with a very big musical identity, we play the British festivals and I am also in the ’choirs scene’. We are also in other bands for fun, music all the way, roll on summer!
Su Hart, Baka Beyond

I like to think that I belong to the head-strong Independent Music Scene – where we – musos and audience and everyone in between – all make gigs/tours, recordings, releases happen for ourselves and work our arses off to keep it going for the rest of our lives – all for the love of Music!
Florelie Escano
All of the above and more in my shed every Friday night
Hound

Currently its the Yarra River Trail I’m walking along. Generally my scene would be Melbourne. Nothing feels or compares to home.
Simon McConnell, The Delta Riggs
When I’m not working in the studio or doing shows I’m at home with my partner and our baby so I guess they are my scene.
Way of the Eagle
Leadfinger is a very strange band, hard to define, but we are free.
Stew, Leadfinger
Sitting in the sun, in a nice chair, with a good book.
James Reyne

Cool small bars with good food, good wine, good company
The Backsliders
No set scene. We have played with a variety of bands from King Parrot to The Datsuns. Offer us a show and give us a try!
Los Hombres Del Diablo