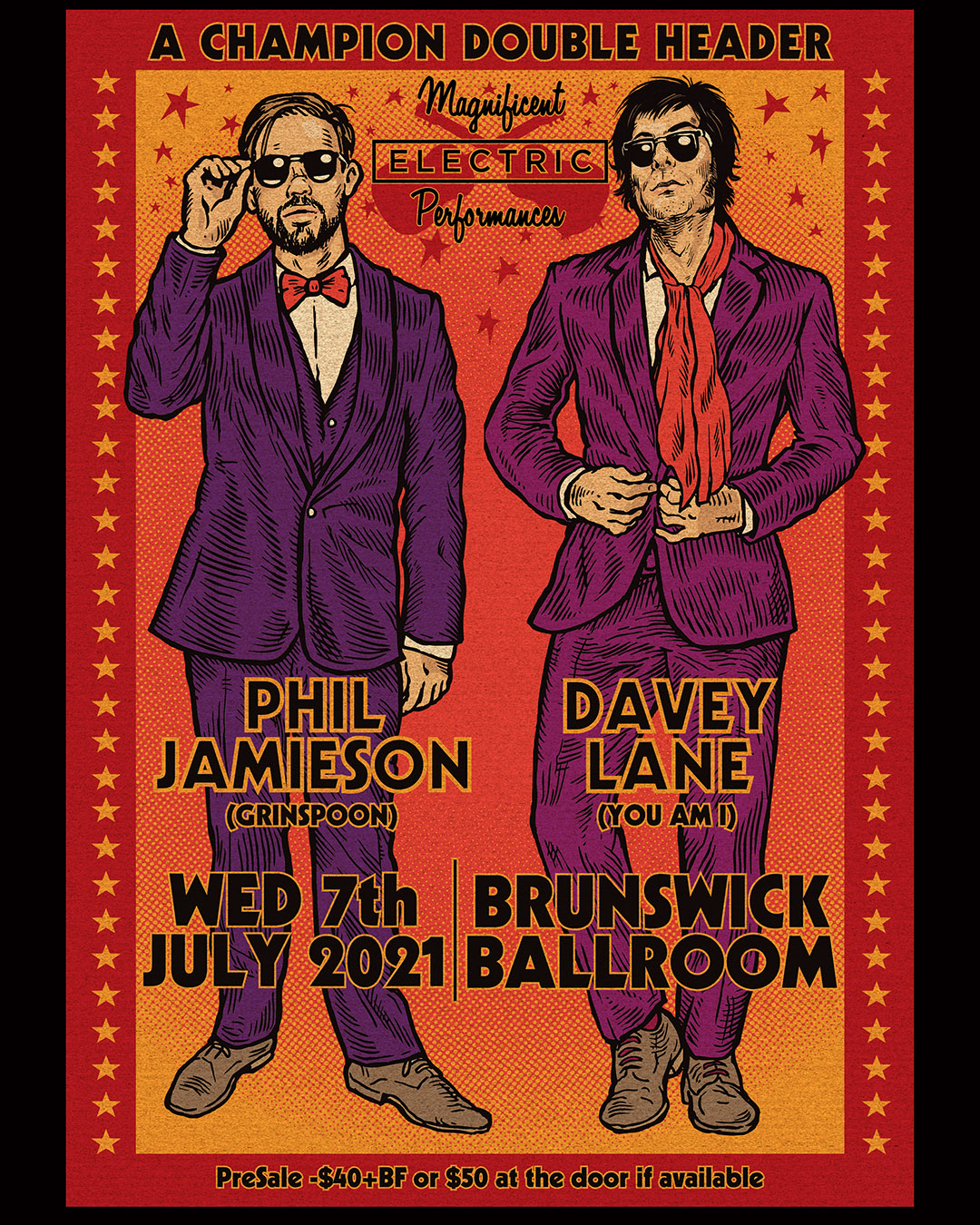 In a rare treat for Melbourne Aussie rock lovers, Grinspoon frontman Phil Jamieson and band are playing a unique one off show with special guest Davey Lane of You Am I. The show is happening Wednesday July 7 at the Brunswick Ballroom.

Phil and Davey’s appearance together follows the release of Phil’s new singles ‘Kapow!’ and ‘Rubberband’; two tracks that highlight Jamieson’s talents as an emotive songwriter and storyteller. “Kapow” also features additional guitars and production courtesy of Davey. The two tracks are available digitally through the usual outlets, or combined on a limited edition 7″ single from Phil’s website – www.philjamieson.com.au

In addition to joining Phil on stage, Davey Lane will perform his own set, taking in material from his recent solo album Don’t Bank Your Heart On It. Davey is also about to release a new single, “Reign In Silence”, a cover originally by Belarusian doom metal group Gods Tower.

Flanelette pyjama pants.
Timberwolf
Well I’m still looking for my scene, and I think I might have found it. Between the pages of What’s My Scene Magazine.
Dave Faulkner, Hoodoo Gurus
I think my style is more just making cameos in everyone else’s scene.
Mojo Juju

I’m in with the Out-Crowd
Dave Warner
Currently its the Yarra River Trail I’m walking along. Generally my scene would be Melbourne. Nothing feels or compares to home.
Simon McConnell, The Delta Riggs
My scene is driving fast cars and shooting guns.
Ace Frehley
Art is my scene. No labels, restrictions or judgement. I love art in all it’s varied glory.
The Last 5 Queers

I like to think that I belong to the head-strong Independent Music Scene – where we – musos and audience and everyone in between – all make gigs/tours, recordings, releases happen for ourselves and work our arses off to keep it going for the rest of our lives – all for the love of Music!
Florelie Escano
Our scene is in the city of Bath, a small city with a very big musical identity, we play the British festivals and I am also in the ’choirs scene’. We are also in other bands for fun, music all the way, roll on summer!
Su Hart, Baka Beyond

I love being on a little boat near home in South West Victoria with a fishing line in the water, the Sun coming up or going down. I also love walking the streets of Melbourne or Manhattan or many of the beautiful towns and villages of Ireland or anywhere. My partner and my family are central to it all. I also love being in the midst of a great music session, anywhere, anytime, being transported into the soul of the Universe.
Shane Howard
Currently, I’m completely enveloped by writing my book; trying to complete the manuscript for my tome.
Jeff Duff

Act III, Scene VI of King Lear. A tense and gripping scene wherein the ageing king informs his three daughters that they have all been accepted as contestants on Family Feud.
Ben Pobjie, comedian
When I’m not working in the studio or doing shows I’m at home with my partner and our baby so I guess they are my scene.
Way of the Eagle
Hiking a 14K foot mountain in Colorado
Cole Washburn

Tunes, mates, and honesty. No dickhead policy!
Buddha In A Chocolate Box
The car wash scene from Cool Hand Luke will do just fine thank you.
Old Gray Mule
All the kids who weren’t cool at school and still aren’t. Those people who didn’t manage to become awesome artists and uber hip performers. The raggy dolls who never found a way to make their raggy doll-ness work for them.
Jonathon Duffy