PHIL CAMPBELL AND THE BASTARD SONS are back in town! The Hard Rock powerhouse from Wales announce their new album ‘We’re The Bastards’ today, to be released on November 13th via Nuclear Blast!

Singer Neil Starr on the new album: “It’s definitely great to know that we have an audience now. We know there are people that want to hear it, but the truth is that we just had fun with it. Once again, we made the record we wanted to make and it’s been really exciting. It was awesome to take our minds off everything and just concentrate on recording a kick ass album for the fans to enjoy.”

In celebration of the announcement, PHIL CAMPBELL AND THE BASTARD SONS release the first single ‘Son Of A Gun’ today, together with an amazing music video.

Phil Campbell about the new single: “We’re really excited to announce the release of our new single “Son Of A Gun”, it will blow your head off!” 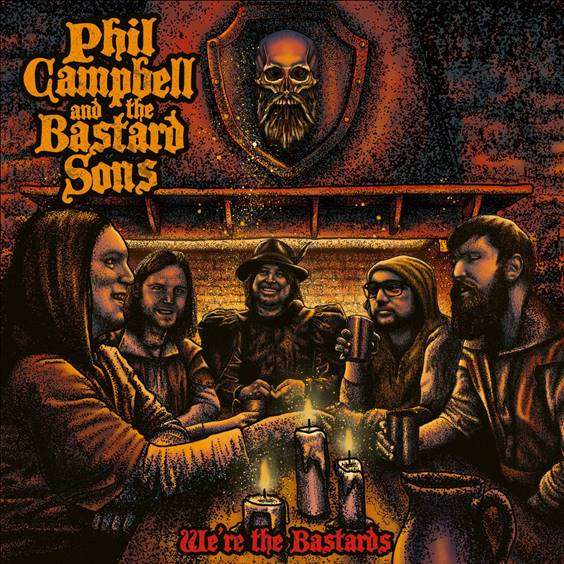 Pre-save the album on all digital streaming platforms here:
http://nblast.de/PhilCampbellATBSpreS

Formed in the aftermath of MOTÖRHEAD’s dissolution, following the death of Lemmy Kilmister in 2016, PHIL CAMPBELL AND THE BASTARD SONS were always going to draw a crowd at any discerning rock or metal festival. Led by one of the genre’s most respected guitarists and completed by his sons Todd (guitar), Tyla (bass) and Dane (drums) and powerhouse frontman Neil Starr, the band emerged onto the 2017 touring circuit powered by a huge amount of good will, a smattering of MOTÖRHEAD covers and a handful of new songs that crackled with passion and swagger. Landing themselves a prestigious support slot on GUNS N’ ROSES 2017 summer stadium run, the BASTARD SONS hit the ground running.

Fast forward to 2020 and, just like everyone else, PHIL CAMPBELL AND THE BASTARD SONS had to cancel a lot of carefully-laid plans when the global pandemic descended on us all. But as if to confirm their absolute dedication to blowing people’s heads off with thunderous rock ’n’ roll, the band refused to cancel plans to record a follow-up to their widely lauded debut. Recorded and engineered during lockdown by guitarist Todd Campbell, the second BASTARD SONS album may be just the tonic people need right now. It’s called We’re The Bastards and it’s bigger, better and even more raucously uplifting than its predecessor. In fact, it’s the sound of a great band hitting their stride and buzzing with confidence.

Phil Campbell‘s scene is “in his head”. The legendary guitarist of MOTÖRHEAD and of Phil Campbell and the Bastard Sons states: “My scene is couch potato laziness right now. With a hint of professional dog walker […]

It is an amazing feeling when there is no need for something, but the possibility for everything. When you, just like punk rock band ITCHY, don’t have to follow certain trends and then drown in some hype, […]

Despite the horrible news that Testament frontman Chuck Billy, his wife Tiffany and some crew tested positive to COVID-19 things are now looking up for them!   To keep the good news rolling, the […]

My bedroom
Nantes
I love being on a little boat near home in South West Victoria with a fishing line in the water, the Sun coming up or going down. I also love walking the streets of Melbourne or Manhattan or many of the beautiful towns and villages of Ireland or anywhere. My partner and my family are central to it all. I also love being in the midst of a great music session, anywhere, anytime, being transported into the soul of the Universe.
Shane Howard
It’s a delirium, really, but I like to live like this.
Hugo Race
I am a simple man. My scene is simple. I like playing metal and spending time with my family.
Waclaw ”Vogg” Kieltyka, Decapitated
I don’t wish to belong to any scene that would have me as a member (with thanks to Groucho Marx).
Bob Spencer, Raw Brit
Scones, savory, sweet I don’t mind
The Wooden Sky
Well I’m still looking for my scene, and I think I might have found it. Between the pages of What’s My Scene Magazine.
Dave Faulkner, Hoodoo Gurus
Our scene is folk that are interested in change. Not just music, but breaking the norm, the boundaries and stereotype of Australian ’rock/pop’ music. Unpredictable, the question marks, the new jokers in town. Don’t Believe The Haze.
Slumberhaze
Hot, hot lovers
Luke Monks, Gay Paris
I have no idea what my scene is; I have been listening to Dubstep and a bit of Drum N Bass. I found a lot of Hip Hop and RnB stuff is getting very interesting again it is pushing different sounds out. I’ve been really into cycling since the early ‘90s; racing mountain bikes and racing road bikes. So between cycling and music there is not much time left, a bit of sleep now and again.
Mike Edwards, Jesus Jones
I like the beach more than anything. The beach feels like home all year round. In terms of a scene…I actually prefer to hermit most of the time.
Abbe May
Ep. 1 Series 3 of BBC’s ’Sherlock’ where Sherlock bungee jumps through a window and kisses Molly Hooper.
Miss Adelaide Everheart from Early Burley Burlesque
Sitting in the sun, in a nice chair, with a good book.
James Reyne
I’m in with the Out-Crowd
Dave Warner
“Malcolm Hill is a lifetime member of the Melbourne Music Mafia and part of the ratpack of post punk Melbourne artists who have been keepin’ it real across diverse art forms for thirty years.”
Malcolm Hill
No set scene. We have played with a variety of bands from King Parrot to The Datsuns. Offer us a show and give us a try!
Los Hombres Del Diablo
Wherever there is music is where I feel most at home
Toby Robinson
Hiking a 14K foot mountain in Colorado
Cole Washburn
Deep 70s disco, wonky synths, shady lyrics, fairy lights and cheap wine.