After a sell-out Boxing Day show, Comedienne Pam Ann returns to perform two shows in her home town of Melbourne as part of her Queen of the Sky tour.

Pam Ann takes her crowd on a first class journey through the world of international air travel, and nothing is sacred.

Pam Ann’s caustic wit knows no boundaries so fasten your seat belts and prepare for take-off – she’s Queen of the Sky and it’s guaranteed to be a turbulent flight.

Pam Ann is a Melbourne girl at heart, and often describes performing with the ‘girls’ at the GH Hotel as coming home. Having grown up in Vermont, this international Air Hostess now lives in New York City and regularly performs across Europe. 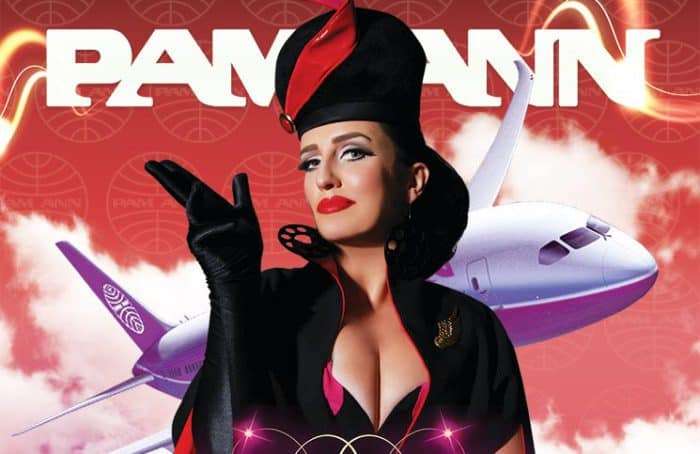 Tickets are on sale now from

I like to think that I belong to the head-strong Independent Music Scene – where we – musos and audience and everyone in between – all make gigs/tours, recordings, releases happen for ourselves and work our arses off to keep it going for the rest of our lives – all for the love of Music!
Florelie Escano
Local bands at sticky carpet venues. Vinyl. Social networking. Keeping healthy in order to play full throttle live sets. Loud rehearsals. Good people with creative ideas. PRIMITIVE ROCK.
Jon S Williams of City of Cool

The car wash scene from Cool Hand Luke will do just fine thank you.
Old Gray Mule
Going to the river on sunny afternoons with the blow up dingys and resting your beers on lily pads.
The Frowning Clouds
Rock’n’Roll
About Heels on Decks

Leadfinger is a very strange band, hard to define, but we are free.
Stew, Leadfinger
Aside from music and everything creative, I love open-mind people, unexpected humour, seeing the world and nature, riding my bicycle, playing billiards. I’m also a fan of coffee, whiskey and most things vintage.
Jessica Stuart Few

Tunes, mates, and honesty. No dickhead policy!
Buddha In A Chocolate Box
I have no idea what my scene is; I have been listening to Dubstep and a bit of Drum N Bass. I found a lot of Hip Hop and RnB stuff is getting very interesting again it is pushing different sounds out. I’ve been really into cycling since the early ‘90s; racing mountain bikes and racing road bikes. So between cycling and music there is not much time left, a bit of sleep now and again.
Mike Edwards, Jesus Jones

I love being on a little boat near home in South West Victoria with a fishing line in the water, the Sun coming up or going down. I also love walking the streets of Melbourne or Manhattan or many of the beautiful towns and villages of Ireland or anywhere. My partner and my family are central to it all. I also love being in the midst of a great music session, anywhere, anytime, being transported into the soul of the Universe.
Shane Howard
Currently its the Yarra River Trail I’m walking along. Generally my scene would be Melbourne. Nothing feels or compares to home.
Simon McConnell, The Delta Riggs
What’s my scene? well…
And another thing I’ve been wondering lately
Oh, baby,
Tell me where have you been?
Now the stage is set
Where’s my Juliet, baby?
Is it maybe
My Midsummer Night’s Dream?
What’s my scene?
Clowns