Featuring Daryl Braithwaite, Russell Morris, Wendy Matthews and Mental As Anything, the One Night Stand Legends Live concert promises a night packed full of classic hits and, as concert-goers will undoubtedly find themselves drawn to the dance floor, Jupiters is making the dance floor open to all.

When it comes to recognisable voices in the Australian music scene, there are few as impressive as that of Daryl Braithwaite. The Aria Hall of Fame inductee is a music icon known for his solo hits and as a band member of Sherbet. Daryl is best known for his chart-topping hit ‘The Horses’ – a song which never fails to get massive audience participation, held the number one position on the national charts for more than three weeks, and was voted ‘Australian Song of the Year’ at the 1991 Australian Music Awards.

Joining Daryl on the stage is Russell Morris. Best known for his 1969 number one single ‘The Real Thing’ – one of the greatest psychedelic pop songs ever recorded – Russell defied all expectations in 2013 to score the highest-selling album of his career, ‘Sharkmouth’, a blues album about Aussie characters of the 1920s and 1930s. A master performer with a diverse career that has spanned decades, Russell’s consistency as an entertainer has never wavered, something that sees him performing regularly to packed crowds around the globe.

Regarded as one of Australia’s leading female singers, Wendy Matthews encompasses over 30 years of experience in the music business. With seven Arias, 19 hit singles and seven platinum-plus selling albums, it’s no surprise that many of Wendy’s old-time, heart-warming ballads are still being enjoyed today such as her career defining single ‘The Day You Went Away’.

There is no doubt, Mental As Anything are legends in the Australian music industry – both for their iconic hits and the folklore behind the band. Now, this group of talented musicians are joining the One Night Stand Legends Live line-up, bringing their raft of classic hits to the Gold Coast. There are almost too many Mental As Anything hits to count, but just some of their gems include ‘The Nips Are Getting Bigger’, ‘Too Many Times’, ‘If You Leave Me Can I Come Too?’, ‘Live It Up’ and ‘Rock ‘n’ Roll Music’ to name a few. 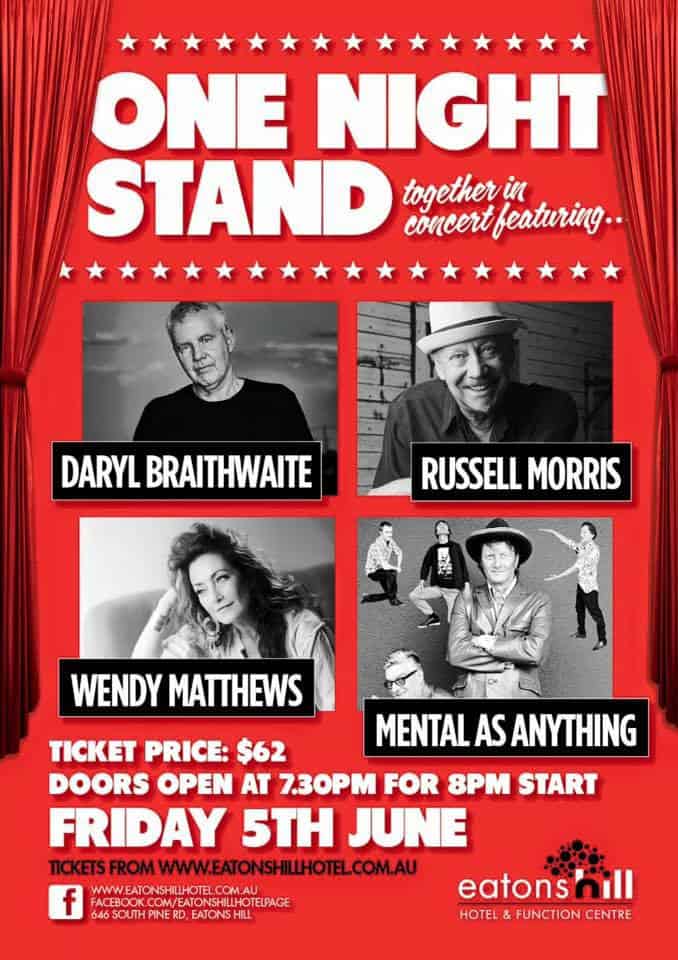 There was so much see to at the Muster. Here are some of What’s My Scene’s highlights. They are The Hillbilly Goats, Blue Eyes Cry, Jasmine Rae & Mental As Anything.

PURE GOLD LIVE IS BACK WITH MORE OF YOUR FAVOURITE ARTISTS! Get ready Melbournians – PURE GOLD LIVE is coming back right at you! After three massive sold out Melbourne shows across the previous few […]

Empire Touring and What’s My Scene are giving away three double passes to see PURE GOLD LIVE in concert at the Palais Theatre, Melbourne on Saturday 3rd March 2018. For your chance to win simply: […]

Tegan Voltaire, The Voltaire Twins
Country roots, old time, bluegrass, folk, Americana scene Traditional plus :)
Whitetop Mountaineers
I love being on a little boat near home in South West Victoria with a fishing line in the water, the Sun coming up or going down. I also love walking the streets of Melbourne or Manhattan or many of the beautiful towns and villages of Ireland or anywhere. My partner and my family are central to it all. I also love being in the midst of a great music session, anywhere, anytime, being transported into the soul of the Universe.
Shane Howard
Fuck the Fucking Scene question! xo
Fuck The Fitzroy Doom Scene
I like to think that I belong to the head-strong Independent Music Scene – where we – musos and audience and everyone in between – all make gigs/tours, recordings, releases happen for ourselves and work our arses off to keep it going for the rest of our lives – all for the love of Music!
Florelie Escano
The dog park’s pretty good. I have a couple of miniature pinchers. And they’re the loves of my life. I take them for walks to the dog park; I’ve got a Harley Davidson I ride around. It’s not too exciting. It used to be sex, drugs and rock n roll; now I walk my dogs.
Stan Lee, The Dickies
Leadfinger is a very strange band, hard to define, but we are free.
Stew, Leadfinger
It’s Thonbury. It’s my dreaming. I’ve lived here 30 years and it’s evolved with me. The more I drink wine, the more wine bars appear in the neighbourhood. The more I eat, the more cafes appear in the neighbourhood. Fantastic.
Denise Scott, Comedian
Anyone who welcomes a hairy, gold wearing, hot air blowing idiot to a dinner table is my scene.
Henry Wagons
If you’re a Max Chillington then you’re our scene.
Gunslingers