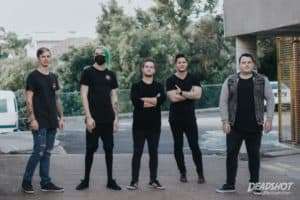 Brisbane new-nu-metal outfit Serene have put a new track out into the world – a bone-achingly hard-hitting track entitled Stay Awake. The new track is out now in iTunes, Apple Music, Spotify and all good digital outlets.

Consisting of Vocalists Dan Turnock and Daniel Jury, Guitarist Jarred Vickers, Bassist Tom McKellar and Drummer Jimmy Payne, the five piece puts its massive energy into crafting a sound that’s dense without losing substance. This enables the band to convey their ideas and stories into their songs that drive home a message.  [pullquote]Jarred Vickers said of the track and it’s meaning: “Stay Awake was written from the perspective of a personal issue to addiction of prescription medication which lead to insomnia and chronic depression after an abusive relationship.” [/pullquote] Having released their First Ep “Found My Way” in 2014, the band has gone onto to release two more singles “Choke” in 2015 and “Tempus Finis” in 2016. With the new Ep “Tempus” out now, Serene are set to show the world who they are in the next chapter in the relatively new bands life.

The band have been in building mode since inception, garnering fans from playing shows with Slaves, I Set My Friends on Fire, Miss Fortune, We Set Signals, Awaken I Am, Bayharbour, Sienna Skies, Storm The Sky and more.  This new track “Stay Awake” heralds new sounds and even more new music from the band in the near future.

About Mary Boukouvalas 1218 Articles
Mary is a photographer and a writer, specialising in music. She runs Rocklust.com where she endeavours to capture the passion of music in her photos whether it's live music photography, promotional band photos or portraits. She has photographed The Rolling Stones, KISS, Iggy Pop, AC/DC, Patti Smith, Joe Strummer, PULP, The Cult, The Damned, The Cure, Ian Brown, Interpol, MUDHONEY, The MELVINS, The Living End, Foo Fighters, Smashing Pumpkins, Rage Against The Machine, The Stone Roses –just to name a few - in Australia, USA, Europe and the Middle East. Her work has been published in Beat magazine, Rolling Stone magazine, Triple J magazine, The Age Newspaper, The Herald Sun, The Australian, Neos Kosmos, blistering.com, theaureview.com, noise11.com, music-news.com. She has a permanent photographic exhibition at The Corner Hotel in Richmond, Victoria Australia.
Contact: Website Facebook Twitter YouTube

Act III, Scene VI of King Lear. A tense and gripping scene wherein the ageing king informs his three daughters that they have all been accepted as contestants on Family Feud.
Ben Pobjie, comedian
Tunes, mates, and honesty. No dickhead policy!
Buddha In A Chocolate Box
Yass KFC
Simon, Loon Lake

I love being on a little boat near home in South West Victoria with a fishing line in the water, the Sun coming up or going down. I also love walking the streets of Melbourne or Manhattan or many of the beautiful towns and villages of Ireland or anywhere. My partner and my family are central to it all. I also love being in the midst of a great music session, anywhere, anytime, being transported into the soul of the Universe.
Shane Howard
The dog park’s pretty good. I have a couple of miniature pinchers. And they’re the loves of my life. I take them for walks to the dog park; I’ve got a Harley Davidson I ride around. It’s not too exciting. It used to be sex, drugs and rock n roll; now I walk my dogs.
Stan Lee, The Dickies

When I’m not working in the studio or doing shows I’m at home with my partner and our baby so I guess they are my scene.
Way of the Eagle
Going to the river on sunny afternoons with the blow up dingys and resting your beers on lily pads.
The Frowning Clouds
Cool small bars with good food, good wine, good company
The Backsliders
If you’re a Max Chillington then you’re our scene.
Gunslingers